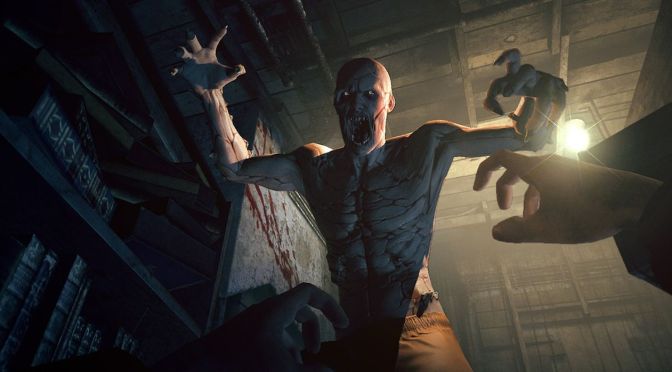 The best horror games nowadays are coming from the indie scene. In large part, that’s due to the success of Amnesia: The Dark Descent. A horror game that brought back the rarely used idea of removing combat from a game and in effect, leaving a player feeling helpless. Indie developer, Red Barrels was inspired by that idea when creating Outlast.

A first-person, horror game made by a group of guys who decided to leave their studio jobs at Naughty Dog and Ubisoft, respectively, to enjoy the creative freedom and uncertainty that makes up the life of being an indie.

Outlast opens with journalist, Miles Upshur driving up to Mount Massive Asylum, after receiving an anonymous tip. A seedy corporation, that is vaguely similar to the Umbrella Corporation, has been conducting shady experiments and you’re there, camera in hand, to uncover the truth.

These experiments revolve around patients being administered bizarre treatments and are actually based on real-life experiments that the CIA conducted from the 50’s to the 70’s. Intriguing as this sounds, it isn’t. The story is mostly told through various documents you find upon exploring the asylum but throughout the campaign, I found it difficult to really care about what was going on. This is a common problem I tend to have with video games, where story is mostly forgettable but it didn’t impact my experience.

The first thing that stands out in Outlast is the decision to equip our main character, with only a camera; night vision included. (There’s a neat added effect via PS4’s light bar that glows green whenever night vision activated). Movies like the Blair Witch Project and REC have trained us to be fearful of the night vision aesthetic and Outlast utilizes this to full effect. Traversing the asylum is incredibly creepy and the night vision is a huge part of that. It put me in an overly cautious mood while also offering me a sense of comfort. This is a comfort that is taken away during a later section of the game.

The inhabitants of Mount Massive Asylum don’t help to ease tension either. There’s plenty of “Variants” that are only interested in your demise but the asylum is also populated with patients who are indifferent to your presence. This adds an effect of paranoia, as you don’t really know who wishes to do you harm. That ambiguity and the way the developers tease you by having different characters that are just there to play with you, is very effective. There are moments sprinkled throughout where you’ll have a character/s behind some type of barricade, taunting you, and you’ll eventually be forced to make your way to where they are. But when you get there, they’re nowhere to be found. It’s a great way to really mess with your head.

Outlast was originally a PC game, released back in September 2013 and from sight to sound, it’s superb. The lighting is the biggest standout, especially during a section midway through the game, where you’re outside. But, there are occasional load screens that occur mid-level that disturb the flow of the game. And character models are all too often, recycled. More variation would have been welcome, but the repetitiveness doesn’t make them any less terrifying.

Outlast’s gameplay is all about stealth and evasion. The game immediately makes that known upon its opening title card, you can “Run”, you can “Hide” or you can “Die.” The aforementioned camera helps you navigate the asylum and is powered by batteries that you, naturally, have to find more of. I played the game on Normal (the game’s lowest difficulty setting) and there was a point midway through where I felt the game did a good job balancing how many battery packs were to be found. But by the end, I had more than enough. On harder difficulties, battery packs are harder to come by which can easily alter how much you utilize night vision and would definitely up the scare factor, as if that’s something that needs to be increased.

You’re repeatedly put into sequence after sequence of trying to avoid and evade people who just want to murder you. I constantly died during my play through but that could be due to my lack of stealth game skills. This lead to a bit of frustration but it’s hard to place that on the game itself. Outlast gives you a system and that systems work well. You can hide in the dark, in lockers and under beds. But there are times when the game purposefully breaks its own rules. During these parts, you have to get away from your pursuers, but there is no hiding. You either figure out how to escape or you die. It feels cheap but the game is forcing you to think, under pressure, and those are easily the best parts of the experience.

There’s not much variation to Outlast but what’s here, works extremely well. A big reason for that is the game’s almost, perfect length. The story may be forgettable but that is easily trumped by nicely timed scare tactics (I audibly screamed twice), a great, albeit familiar setting and brilliant use of night vision. That ultimately adds up to a gaming experience worth enduring.

One thought on “Outlast Review”