Ever since the Vita came out, Sony has promised that it would provide console quality games on the go. After games like Resistance: Burning Skies and Call of Duty: Black Ops Declassified, I became afraid that first person shooters missed out on the full Vita experience. When Killzone: Mercenary was first announced, I was skeptical about it being the Vita’s shooter that it deserves. So, will Mercenary be a shot above the rest, or will it fall like the ones before it?

Being a newcomer to the Killzone franchise, the game introduced me to it by giving me a quick history of the ISA and Helghast war. Taking place during the war, the game focuses on a mercenary, Arran Danner, taking missions solely for the purpose of money.

The story starts with your boss, Anders Benoit, sending you on a mission to rescue ISA Admiral Alex Gray from the Helghast. After you rescue her, your partner Ivanov sacrifices himself to keep ISA weapons technology out of the Helghast hands. After two years have passed, the game focuses on a kid named Justus; the son of a Vektan ambassador that was killed. 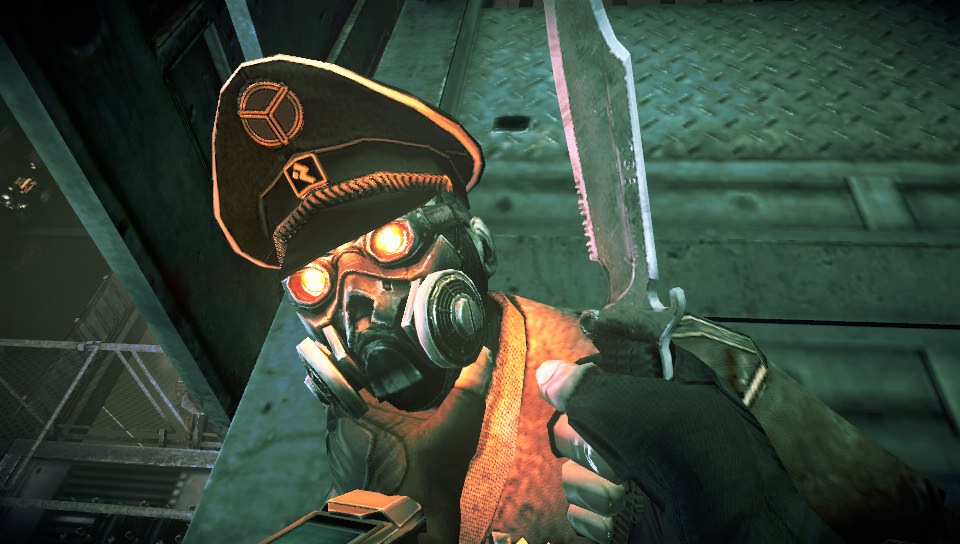 The game as a whole is woefully short; clocking in at less than four hours, and hinges on the fact that Danner is a mercenary. People promise to pay him to shoot people, he does, and gets paid. Although Danner and a couple other characters are well done, I feel as though the game was too short to establish any connection with him, Benoit, Justus, or any other main character in the game. Because of that, the game doesn’t have that special emotional support I hoped to find.

Also, knowing that this game is a spin off and takes place during Killzone 2 and 3 kills any sort of threat that there might have been. At the beginning, a war is going on and the war will continue to go on because of where the game is placed on the timeline.

As for difficulty, the game is fairly opposite of what it should have been. It was difficult to progress through the game in the beginning and became easier towards the end, with the missions getting shorter and shorter. This is surprising, seeing as only nine missions exist in the entire game and, although there are multiple objectives and ways to play the levels, like interrogating officers to gather intel to read for later, it doesn’t add much to the story as a whole. 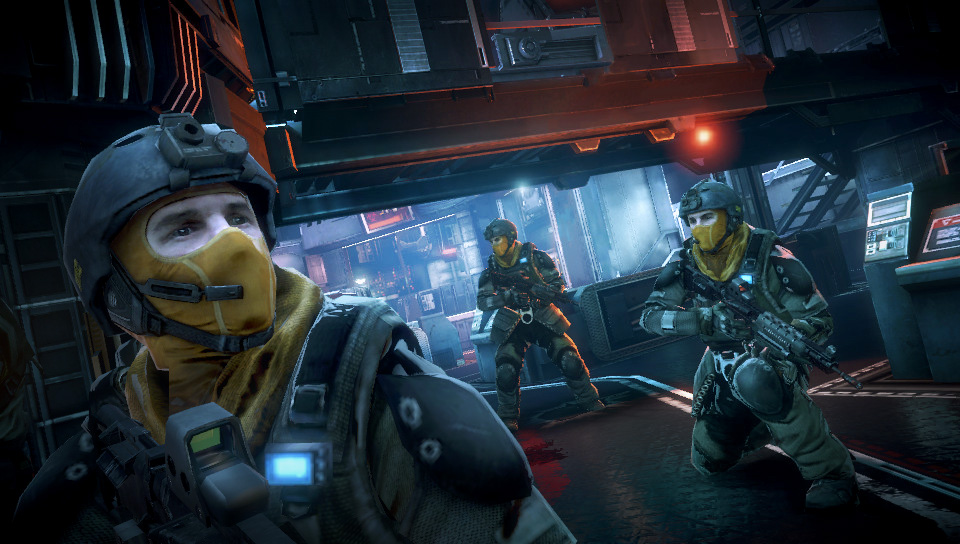 One of the hindrances of military shooters on the Vita is that they have not really looked like their console counterparts. Mercenary runs on the same engine that the console games run on, and it shows. The game looks just as good as Uncharted: Golden Abyss, one of the best looking games on the system. I only encountered a couple of graphical glitches during playing both online and offline, although I did have to reboot my system once during the story campaign.

The environments, although the traditional gray of modern military shooters, were actually more colorful that I expected. The quality in the environment was great; both in the single player and multiplayer maps. The level design was also great and, although I did get lost once due to my minimap being gone, provided a more vertical fight rather than just a horizontal firefight like many other games out there, which is appreciated. 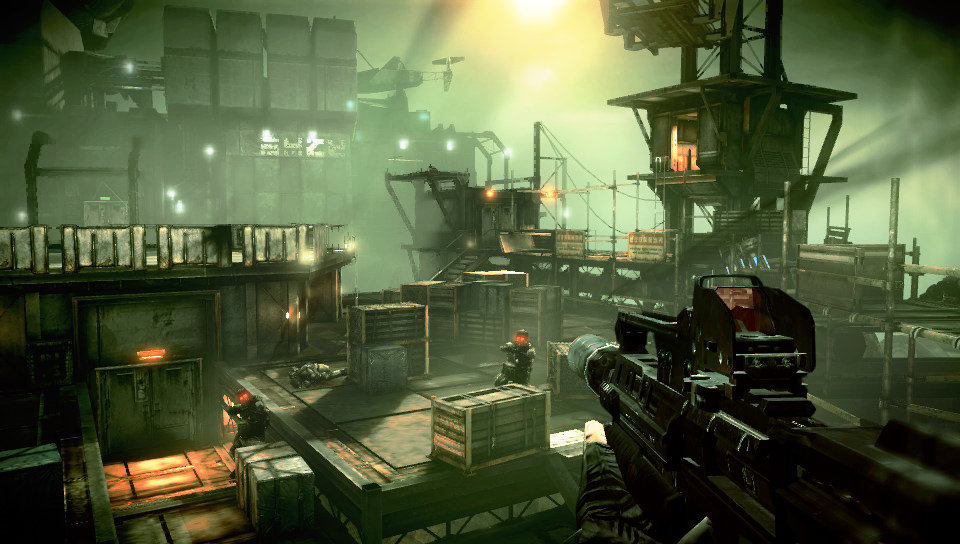 The sounds and voice acting are also done well, even if the soundtrack is nothing great to talk about. All the characters are voiced believably, but the lip syncing is a little off, even though that is a small complaint given that this is a Vita game and the screen is small.

All in all, the game presents itself like a console game. My roommate would see my game and be amazed about how good it looks. The sounds and the environment give the game its atmosphere, and it nails it almost perfectly.

The problem with the previous shooters for the Vita and the genre as a whole is that many of the common gameplay buttons are just not there. For example, running is usually mapped to one of the sticks, grenades are mapped to the shoulder buttons, aiming down the sights is mapped to another stick, and so on. The Vita is missing four of those buttons (the shoulder buttons and stick buttons), and has to use the touch screen to hold up the gameplay.

I am happy to report that Killzone has done it. It has made the first person gameplay on the Vita work naturally. There may be some difficulty with certain actions, but almost everything seems natural. Aiming works well, along with most of the game’s other mechanics. The melee system uses touch swipes for melee kills, but they looked much better than traditional quick time events, and didn’t distract me from the game. 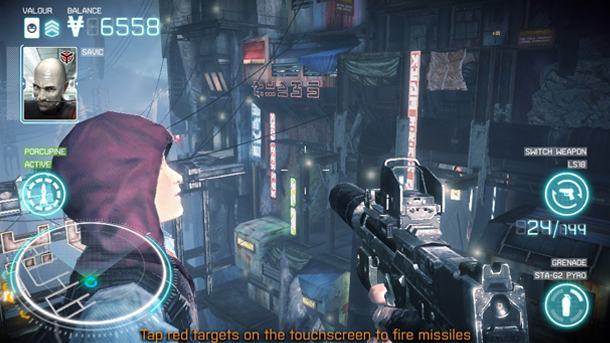 I only had problems with two controls: sprinting and grenades. Sprinting is mapped to the O button, which can be hard to use, although this may just be my personal configuration. It is also mapped to the rear touch pad, but I never found myself using that feature naturally. The grenades, however, is another problem. They work just like another weapon, by being selected using the touchscreen. If I could use the grenade using the touchscreen exclusively (touching and holding to select, aiming, then letting go to throw), I would find myself using my grenades more. However, because of the awkwardness of using it, it just didn’t feel right to use them.

The guns are a different story entirely. All of the guns feel great; from the rocket launchers and grenade launchers to the sniper rifles and assault rifles. I found myself personally loving a traditional shotgun and an assault rifle that had a silencer on it, but even the starting weapons are great. There are several Blackjack vendors around the map, which allow you to change your weapons for the situation and refill your ammo, even though there are plenty of ammo pickups throughout the game. 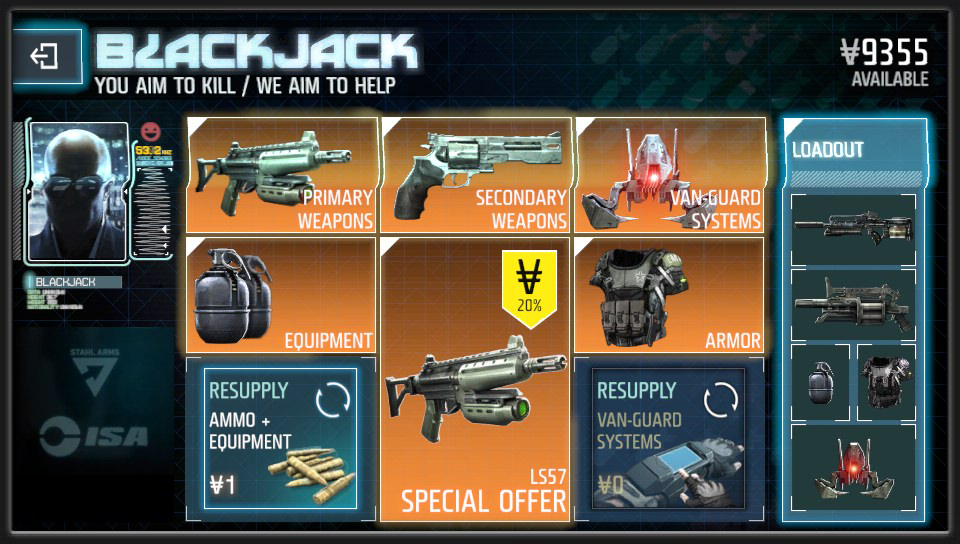 Another mechanic that was done well was the Van-guard technology. This allows for another item to be brought onto the battlefield for a limited time to help out, such as a shield or killing tech. I only used one throughout the course of my playthrough, which was a drone that followed me around, frying enemies around me. It didn’t make me feel overpowered and actually allowed me to survive certain situations. This tech is a great addition to the game.

The Van-guard tech, the weapons, armor, and more are bought using money at the vendors. Money is the central mechanic in the game because you are, after all, a mercenary getting paid for everything you do. By everything I mean kills, melee takedowns, taking out security cameras, gathering intel, headshots, double and triple kills, etc. This mechanics extends into multiplayer, where anything done in multiplayer also earns money to buy guns, ammo, armor, tech, and more.

Progression is made through a traditional soldier ranking, medals, and Valor cards: playing cards that uses the suits to identify what weapon you use the most and the number to assess how much you put into the game. Having the 3 of hearts as a card is not as good as having a king of spades, for example. Collecting Valor cards after a kill and adding to your collection can grant a bonus in the form of cash or additional cards. 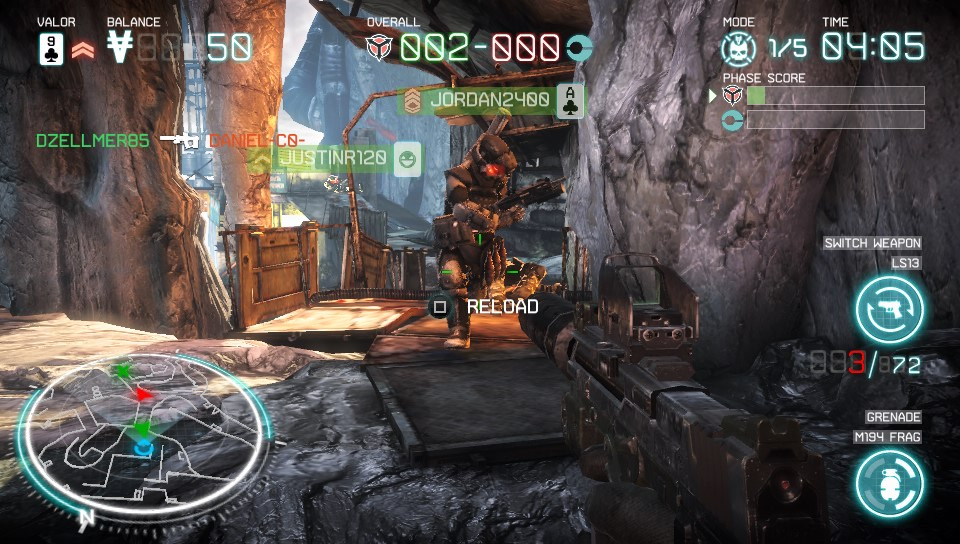 Overall, multiplayer doesn’t have many options. It only has three gameplay options: Mercenary Warfare, Guerrilla Warfare, and Warzone. The three are the traditional gameplay modes of Free-for-all, Team Deathmatch, and Team Objective respectively. There are also six different maps, but as I said before, I like the map design and playing on just these six may get boring after a while, but the maps are well-made and have several secrets to explore. 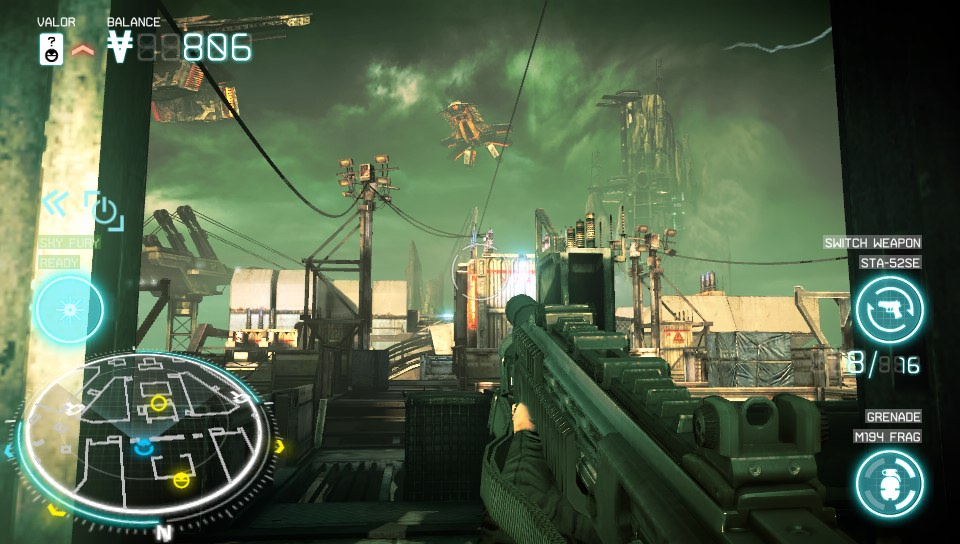 The Vita has found its shooter in Killzone: Mercenary. Even though the story left something to be desired and some of the controls could be better, it granted a wish for Vita lovers who wanted a console-quality first person shooter. The gameplay is fun and immersive. The game pushes the Vita to look like it belongs on a home console, and the Vita produced. It may not be all that it could be in a full console Killzone, but it is a fun game and worthy to be called a must-have for the Vita.