Tales of Symphonia was originally released on the Nintendo GameCube in Japan back in 2003 and was localized for the United States and Europe in 2004.  It was then ported to PlayStation 2 only in Japan in 2004 where it included additional content.  The latter is the edition given the high-definition remaster treatment, so we are getting our hands on it for the first time.  Tales of Symphonia is regarded as one of the best, if not the best, game in the Tales series by many fans.

Either you are here because you love me and everything I write, or because you are just really into JRPGs.  I am willing to bet it is the second option.  One of the major fascinations people have with JRPGs is their wildly entertaining stories that span different worlds, timelines, and dimensions. They also include awesome fantasy attributes like magic, swords, dragons, and scores of other mythical monsters.  Tales of Symphonia is no different.

You follow the story of Lloyd Irving, a boy raised by a dwarf on the outskirts of a town made up of humans and half-elves.  Lloyd’s longtime friend (and crush) Colette is destined to be the savior of the world, as it is on the brink of destruction.  After a series of unfortunate events where Lloyd tries playing hero, Lloyd is forced to leave the town he grew up in.  Things get better as he then joins up with Colette’s entourage as they travel the world in search of the sacred shrines to complete her destiny.

Things get crazier and crazier the further you go, so expect some plot twists.  Though, if you are a seasoned JRPG player like me, most of the plot twists in Tales of Symphonia are quite predictable, especially if you have played multiple Tales titles.  This, however, does not in any way detract from the overall beautiful story as it is one that needs to be told to as many people as possible.

The presentation of HD remastered versions of old games is always hit or miss.  You really never know what kind of quality you will get.  In Tales of Symphonia’s case, I can vouch for it being wonderful.  While still not popping off the screen like most games do now, you can tell that there have been several improvements done to enhance the old standard definition version of the game.  It is widescreen and looks clean for the most part.  That being said, you can still easily tell by the art style that this is a game made back in 2003, which is not a bad thing. 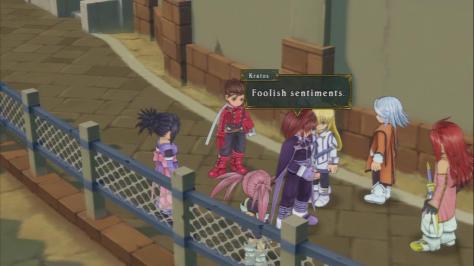 The soundtrack, like most other JRPGs, is absolutely brilliant.  Like every other Tales game I’ve played before, Symphonia has tunes just as catchy.  The issue I had with the sound is not in the music, but with the general sound effects.  They are so loud that it distracts you and often covers up anything going on in the background.  From browsing through the menu to random sound effects found in cutscenes and battles, they are unnecessarily loud and annoying.  This cannot be blamed entirely on the remake, as it uses the sounds from the original game, but it is a pain nonetheless.

This also applies to the voice acting in the game.  Most of the voice acting is fine, and in some cases perfect, but the rest is so horrendously bad that it can kill an entire scene’s impact and emotion.  This just goes to show how far voice acting has come in the last decade and a half. 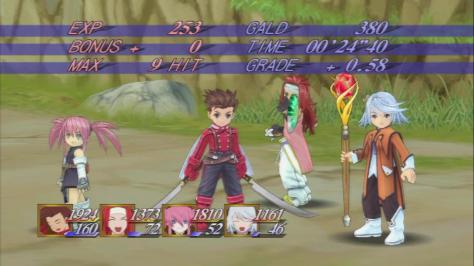 The gameplay in Tales of Symphonia is much like that of the rest of the games in the series.  The world is divided into three areas: the overworld field map, towns/dungeons, and the battle screen.  You will spend most of your time traversing the overworld map and solving puzzles in dungeons, while spending very little time in cities: normally only to restock on items and to advance the story.  You will also encounter the Tales trademark “skits” around towns, dungeons, and on the overworld.  Skits are little scenes in which each of the characters in your party interact with each other; sometimes talking about nonsensical things to give you a little insight into their personalities, while other times advancing the story a little bit by providing some background information.  Personally I love the skits, but in the case of Tales of Symphonia, they were not voiced so I found them to be more of an annoyance than a pleasure like I did in the newest entries to the series.

Battles are normally very quick, lasting between 10-20 seconds depending on your skill level and overall level of your party.  Boss battles can take much longer and also require a lot more skill and item usage, but they are so few and far between that it is a nice change of pace.  Enemies are seen on the field map and in dungeons so you actually have to run up and touch them in order to start a battle with them.  Once in battle, you use the Mutli-Line Linear Motion Battle System.  This allows you to use up to four characters from your party in battle, but you will only be in control of one at time.  You have the option of using normal attacks and special attacks called Artes, which are stronger/magical attacks.  Battles are very fast paced, but if you have played any of the newer Tales games you will be able tell how dated this system is.  It is nowhere near as fluid as some of the new games, which really made these battles feel mechanical to me.  It’s a good thing that battles didn’t last long, or this could have been a real disappointment in the overall game.

Tales of Symphonia has a magical story that very well may be one of the best in the Tales franchise, but that alone does not make it the best game in the series.  While the battle system is dated and clunky, it is still fun and fast paced enough to not let it have too much of a negative impact in the overall value of Symphonia.  The graphics have been wonderfully remastered in high-definition and the soundtrack is by one of the best aspects of the game.  The $40 price tag for the Tales of Symphonia Chronicles set is worth it for this game alone.  It is a beautiful game that has its faults, but deserves to be played by any JRPG fan or Tales fan.

One thought on “Tales of Symphonia HD Review”