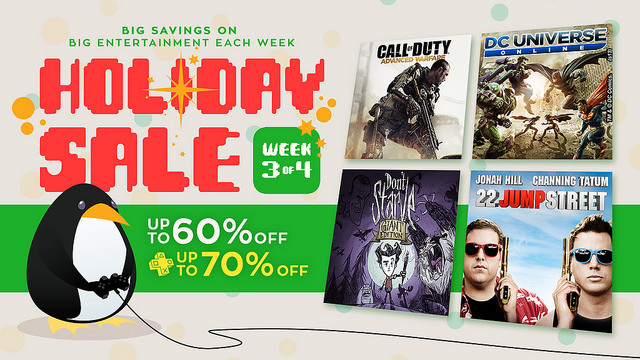 Here are this week’s sales:

The big title that immediately came to mind this week was a sale on Activision’s Call Of Duty: Advanced Warfare. The price for Advanced Warfare is being cut to $44.99. Unfortunately, there isn’t a deeper discount for PlayStation Plus members.

Next game of note is Ubisoft Montreal’s Child of Light. Like last week’s Valiant Hearts which was part of the second week of holiday sales, Child of Light was also made using Ubisoft’s Ubiart framework engine and is a strikingly beautiful game that is an RPG with fairy tale-like story-telling.

Last title that stood out to be is the cult hit and ultra-violent, Hotline Miami. The game is a highly addictive, twitch shooter that has a killer soundtrack. It was offered for free months ago for PlayStation Plus members.

Ultimately, I think it’s a barren week for sales as not much else caught my eye and what was there is stuff I already own. That’s just the way the cookie crumbles sometimes, so no love lost PSN.

Jason Patrick is an Associate Writer at MONG. He has fallen back into NHL 15 and needs worth competition. If you’re up for the challenge, friend him on PSN @ranma627. You can also follow him on Twitter.