NOSTALGIC LOVE LETTER TO GAMING’S PAST

When the credits roll on Axiom Verge, a line comes up that says “developed solely by Thomas Happ.” Axiom Verge is indeed, Thomas Happ’s baby and love letter to gaming’s past.

He spent four and a half years working on the game in his free time, which typically were nights and weekends. He worked this way until Sony picked the game up and agreed to publish it via Sony’s Pub Fund. It was then that Happ began working on the game full time. 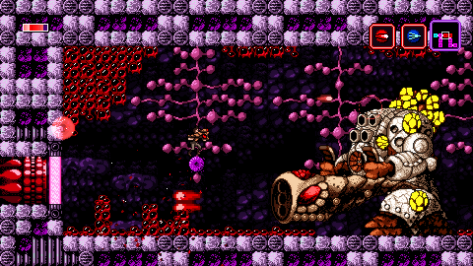 Verge places you in the role of a scientist named Trace. He’s doing some type of experiment when shit goes wrong, naturally, and the facility collapses. He wakes up in an alien world that he later learns is Sudra, with no recollection of how he got there. Sudra is populated by beautiful creatures called Rusalki, who employ Trace to take down a man named Athetos, who has released a pathogen across the land that has infected their world. Without knowing much, Trace embarks on this journey while learning more about the world, the conflict between the Rusalki and Athetos, and about how he fits into all this.

It’s clear from the offset that Happ was heavily inspired by games of the past when creating all the elements that make up Axiom Verge. The world is aesthetically akin to Metroid and Contra with a bit of Rygar and even Bionic Commando thrown in. The environment is made up of several different sections, each with their own unique musical theme and visual aesthetic to go with it. Some of those themes are forgettable but the menu theme and theme for the opening world are especially good. And the environment is varied enough to where each area feels distinct. The sound effects are also a part of the game that needs to be noted. When shooting and destroying enemies, you get that satisfying crunchy sound that made the 8 and 16-bit eras so iconic. Naturally, there are shades of Metroid in the sound design but I even got hints of Mike Tyson’s Punch-Out!!. And the added visual particle effects when destroying enemies is quite satisfying as well.

Like any good story, both sides of a conflict has their own motivation and reasoning for what they are doing. Trace’s journey is especially intriguing because of how he changes along the way. He looks visually boring in the beginning, but once he finds his lab coat, he starts to look pretty badass. As he learns more about the Rusalki and Athetos, he becomes reluctant and begins to question his actions. It’s an interesting angle and an aspect that many games actively ignore. Most games have you mass murdering troves of enemies with zero consequence. It’s awesome Happ actually chose to offer his own commentary on the matter.

The game plays just as good as the classics that came before it. Verge places a heavy emphasis on exploration like any good “Metroidvania” game. There’s a particular joy in finding power-ups and abilities that ask the player to backtrack to explore and access areas that you weren’t able to before. Metroid and Castlevania used it and more recently the Batman: Arkham games effectively used it. There’s a simplicity to that type of gameplay design and there’s a reason it has been used as much as it has. It just works. 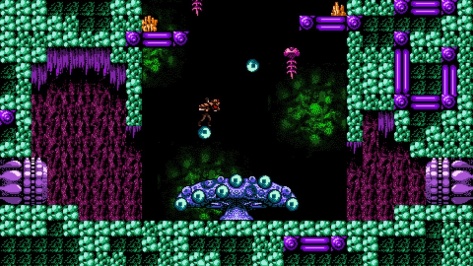 Each area has its own boss and most are relatively simple. It’s just a matter of finding the correct position and weapon type to effectively take them out. But later in the game, the bosses start to become quite a challenge, especially the climactic Athetos battle. The other common enemies that you encounter throughout the different worlds offer a challenge all their own. Simply put, if you’re not a top tier player, expect to die quite a bit. I personally died 143 times during my playthrough.

There are tons of things to do and find in Axiom Verge. You can easily spend upwards of 30 hours while trying to find all the power-ups, abilities and fully exploring the map, so there is a ton of value for those looking for that.

The controls are as tight as one would expect. The only issue I had with the controls happened when using the glitch gun and the power drill. When using those abilities, it feels like the directional control should be mapped to the right analog stick (like a twin stick shooter). Instead, the right analog controlled which weapon you select so that was a no go. It just took some getting used to. But here’s a hot tip: I later discovered that using the control pad (which is far more precise for this type of game) helps lessen that confusion.

The only negative one might find in Axiom Verge is that for those well-versed in games of this style, the game may not do enough to set itself apart. I personally only have limited experience: I played Super Metroid and a few Castlevania games but never to completion, as far as I can recall. So the game felt relatively fresh to me.

An area where I think it does differentiate itself is the glitch gun, which has been talked about quite a bit leading up to the game’s release. The glitch gun basically allows you to change the game’s code on the fly which gives you access to new areas. The gun also physically alters some of the enemies you encounter. It’s a neat idea that I wish was more meaningfully used. What’s there is neat. I just wanted more from it.

Another neat addition is the use of a cute little baby drone. Trace doesn’t have the morphing ball ability like Samus Aran, so the drone allows Happ to bring forth a far more interesting and complex world design. This game took over five years to make and it shows in how meticulously crafted the world really is. You’re going to have to use your noggin and full array of abilities to discover every part of it.

The story wraps up nicely as the game climax leaves the player uncertain on who to side with, as Athetos and the Rusalki both have pros and cons to their causes. The game leaves things open for a possible sequel, which I’d be more than down to play.

In the end, Axiom Verge ends up being a fantastic blend of aspects from gaming’s past, with enough additions to make it unique. People look back fondly on games of yesteryear and one could say that those feelings are their for nostalgic reasons. But that is not the case with games of Axiom Verge’s ilk. The exploration, mystique and challenge that the game offers adds up to a fantastic gameplay experience.

Axiom Verge may be lacking originality, but frankly, originality is overrated. Happ is offering the video game world something that companies like Nintendo, Konami and Capcom refuse to capitalize on these days. Axiom Verge takes us back to a time when games were more simplified and pure. A time when games offered a challenge (something all too rare nowadays) and actually asked the player to discover its hidden secrets.

Axiom Verge was reviewed on a PlayStation 4 using a review code supplied by Dan Adelman (who’s in charge of business and marketing on Axiom Verge). The reviewer, Jason Patrick, spent 24 hours in preparation of reviewing the game. He found 64% of all items and explored 94% of the map.

Axiom Verge comes to PlayStation 4 on March 31st. The PC version of the game is tentatively planned for an early May release and a Vita version is currently being worked on. The Vita version does not have a planned release date yet, but it will be Cross-Buy once it makes its way to the handheld.

Jason Patrick is an Associate Writer at MONG. He does a weekly stream of NHL 15 with some fellow MONG staff over at twitch.tv/mongplays every Sunday! If you’d like, follow him on Twitter.

One thought on “Axiom Verge Review”