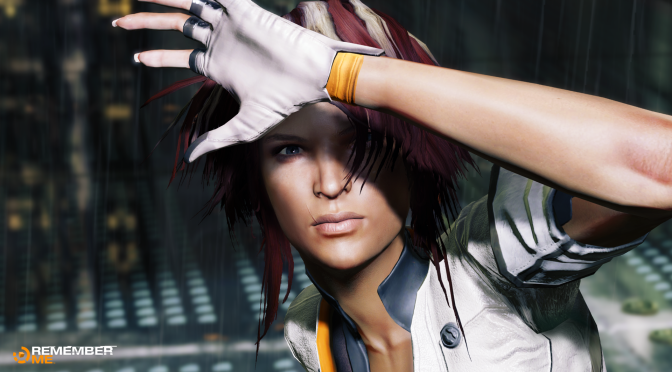 Remember Me is an action-adventure video game released in 2013 worldwide for Microsoft Windows, PlayStation 3, and Xbox 360.  It was developed by Dontnod Entertainment and published by Capcom.  Remember Me was originally a PlayStation 3 exclusive titled “Adrift” before it was cancelled in 2011.  It was later purchased by Capcom and developed as a multiplatform video game.

If I am being completely honest, I was never enamored by Remember Me.  It never stood out to me for some reason, so I never paid attention during its development or after its release.  It was last month when I read something about the premise of the game and decided it actually sounded interesting, so I decided to give it a try.

The game is set in Neo-Paris in the year 2084.  A corporation called Memorize invented a brain implant called Sensen that lets people upload their memories onto the net and share them with other people or even delete their bad ones.  Memorize has turned into a giant corporation that now has most of the population under surveillance because everyone relies on Sensen.  Some humans have become so addicted to using their Sensen and absorbing memories that it has started to degrade and has turned them into mutant-like creatures.

A group of rebels called the “Errorists” did not agree with what Memorize was doing, so they started to fight back and have been trying to bring them down.  The character you play as is a young woman named Nilin, who works for the Errorists.  The game starts out with Nilin in a prison and she is about to have her memory completely erased by Memorize.  The memory wipe doesn’t completely work, so she is being escorted to have the last bits erased when she is saved by an unknown man named Edge.  The rest of the game is about Nilin’s crazy fight to take down Memorize, all the while discovering more and more about her startling past.

Does that premise not sound amazing?   The story stood out to me more than anything else in this game because of how crazy it is.  I am fascinated with science fiction and this seemed like a new take on how the future could end up.  Eventually we start to see the same basic stories over and over in our books, television shows, and games, but this one was so out there that I was intrigued.  I have to say, I really enjoyed the story of this game.  There were twists and turns that I didn’t always expect, which is hard to say for games these days.

Having played several Capcom games before, this game’s graphics fit the mold that I expected.  What does that mean you ask?  It was nothing flashy.  I mean it was a very interesting setting: Futuristic Paris.  But they did not go out of their way to make anything extremely pretty.  Most of the settings were made up of different shades of gray with neon lights everywhere.  It never had any frame rate issues though, so that is a positive.  There was nothing very catchy with the music either, which is not really a bad thing.  It just doesn’t add to the experience unless the music is something special, which is rare.

My biggest issue with Remember Me is the combat system.  It was so ridiculously monotonous that I found each battle to just be tiresome.  Combat is made up of a series of combos.  Combos are made up of stringing together a series of buttons.  Not every series can be a combo.  There are only a handful of combos, and they are a preset button series.  This means that you have to memorize what each combo is.  You have a three, five, and seven hit combo you can use throughout the game.  But there is a catch, you can’t use them unless you have unlocked each button in the combo.  You unlock them by earning experience points from kills.

What all of this means is that you may only have three buttons unlocked that you can use in your five hit combo until you unlock more.  The only cool part about the combo combat system is that when you unlock buttons you can choose which kind to unlock.  They come in four categories that will reward you each time you use them, such as healing you or doing extra damage.  The other way Remember Me adds to the combat system is the use of special moves.  They are unlocked naturally through the story and are very useful.  They are regulated by having cool down timers so that you can’t spam these more powerful moves.

Battles just seemed to drag on.   Sometimes they would last two or three minutes, but sometimes there are groups of enemies that make battles last five to ten minutes.  This is entirely too long for the ridiculous button mashing style of combat.  My fingers were aching by the time I was done with each battle.  This was one of the most annoying combat systems I have ever played.

One of the more interesting parts of Remember Me is when you get a “memory remix” section.  This means that you are able to change someone’s memories for better or worse.  You basically hack into their memory and have the ability to rewind and fast forward through it as much as you like in order to find different objects to interact with.  Each object you interact with will adjust the outcome of the memory just a little bit.  Accessing the right items in the right order will lead the memory to have a good or bad outcome.  This was a fascinating idea, but it wasn’t done enough.

The rest of the game is made up of a series of running and climbing, much like Assassin’s Creed.  This was actually my favorite part of the gameplay.  During these sections of the game you will be able to search for a number of collectables that are in the game.  These collectables will award you with more health, information, etc.

If games were only judged on their premise or story alone, Remember Me would be an outstanding game.  Sadly, we know that is not the case.  This game will forever be remembered for its dry, monotonous combo system.  See what I did there?  If you are into a cool futuristic story with plot twists, I say go ahead and play this game.  If neither of those applies to you then I advise you to stay as far away from this game as possible.  The simplest way I can describe this game is it was not fun to play.  I would have rather watched a movie or read a book with this story instead.

3 thoughts on “Remember Me Review”