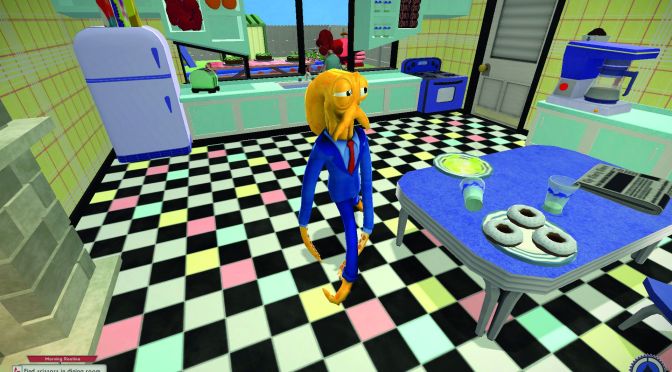 Over the past couple of days, I’ve run into an issue that hasn’t ever come up in 20 years of playing video games–rubber neckers. As I sat either in class or my apartment, I would have spontaneous bouts of hysterical laughter. Of course, my neighboring classmates or roommates would peek over to see what exactly was happening—instead of finding me reading an article on Buzzfeed or watching one of the hundreds of Netflix comedies, they were greeted by a flailing octopus in a suit roaming around grocery stores. They laughed simply looking at the outrageous sight; then asked me about the game. I explained the concept to them and they laughed even more—most of them (non-gamers) wanted a crack at it, all of them kept watching.

Octodad: DC has gotten an enormous amount of positive press within the last couple of months—something I attribute foremost to the wild concept. Created by the developers at Young Horses, Octodad: DC is a sequel of the downloadable game Octodad and the result of a crowd funding campaign. The concept is that you play as an octopus that happens to find its way on land. Meanwhile, every person (save a crazy chef and a few marine biologists) cannot tell that you aren’t human. The goal is simple—don’t let the humans find out that you aren’t one of them. Donning a suit and some fancy moustache tentacles, Octodad is suddenly tasked to complete activities, from the most mundane household tasks to illuminating faulty aquarium lighting to riding the air vents to grab a box of pizza. Yet, despite the wild mess Octodad manages to amass, his human wife and children never seem to question anything happening around them or their father’s abnormal lack of bones.

However, a game needs more than an interesting concept to keep it afloat—a game can only ride on its own hype for so long before it needs to prove itself. This is where Octodad: DC truly shines. The game manages a crazy amount of situations, all with dedicated cut scenes adding more and more insanity to the mix. For instance, heading into the aquarium you witness Octodad in a near panic attack as he looks at the posters on the wall claiming “WE KNOW A FISH WHEN WE SEE IT!” Additionally, your family is constantly firing off one-liners and asking questions (as kids normally are) about how babies are made, if they can buy a unicorn, or rattling off on their favorite movie and/or TV characters. Each time, Octodad fires back with spontaneous BRLRBLRBLRBLBLRB (he’s an octopus, so talking is out of the equation) said in a variety of tones. And everyone is just cool with that! No matter how many times it happens, you will constantly laugh. I found myself lingering in various situations just to listen to the dialogue.

One would imagine that a joke being so played out over the span of a game would eventually wear off over the 12 (elaborate) levels and 4 hours of gameplay, but due to the wonderful voice acting and writing the jokes stay on a roll.

The game runs beautifully and smooth on my general Macbook Pro with a low grade graphics card. Taking place in a cartoony world (which looks moderately inspired by Jimmy Neutron: Boy Genius), the graphics are nothing overly complex to drive up the memory. However, this isn’t anything negative about the game—its art style is exactly what the game needs and it just fits. Possibly more impressive is the wacky physics engine which allows for the crazed antics that Octodad experiences. Or the myriad of scattered jokes and name drops of indie games through the game (i.e. Commander Video Rentals).

The game has smooth screens and menus, showing off the extras and features of the game. Everything is right where it should be. As noted before, the voice acting is hilarious and well done (especially for an indie studio, crowd-funded) and truly makes the game.

Finally, I want to mention the dedicated theme song. I have been humming “Octodaaaaaaad, nobody can tell a thing” for the past 3 days (to the exhaustion of my girlfriend and roommate). There is something to be said about the care given to making a theme song that other studios have failed to do, and I think this shows how much love Young Horses put into this game.

If I had to classify the style of gameplay Octodad employs, it would be a stealth game with “intentionally difficult” controls. Most games set to give complete control to the player, allowing them to control every action and precise movement. Young Horses looks to do the opposite, stealing control away from you. You may intend for Octodad to climb a ladder or even move in one direction, but he will more likely fly off the platform face planting into a banana peel and slipping across the room. In a way, it is the most perfect form of QWOPing. The floor is lined with obstacles (like a slippery mopped floor) to add further depth to the mechanic. While being almost entirely unable to control what happens to Octodad, you have to avoid the increasingly suspicious people—a couple of wrong moves (knocking into them, throwing boxes, or simply walking in front of a marine biologist) will lead to eventual discovery.

There is certainly a learning curve to Octodad: DC. The game tries to ease you into it by teaching you to switch between leg and arm tentacle mechanics, while also having particular actions required within that. While this may make some sections of the game unplayable for those less talented with controlling an octopus, it presents a unique challenge hardly seen in gaming yet.

Though the game’s general difficulty to control Octodad is essentially the funniest parts of the game, I can see how it may easily lead to frustration and off put a group of people playing.

Adding to the list, the game features a co-play mode, as well as tie collectables scattered in particularly hard to reach areas throughout the levels. Octodad also records the time it takes to complete each level, catering to the speed run audience most likely. The additional features are really great aspects of the title and have made me go back a couple of times to beat my best time or find that tie hidden within a crane machine.

Octodad: Dadliest Catch is a phenomenal game—balancing “difficult to control” stealth mechanics as well as comedy leads to a fantastic mixture of pain and pleasure. You may get caught over and over again, but you will certainly have fun each time doing it. While possibly limiting their audience by a set of difficult controls, the game is something nearly unheard of in video games—laugh out loud funny. I highly recommend it; $15 is easily worth a couple of hours of continuous smiling, mild and enjoyable frustration, and a theme song that will never leave your head.