The Walking Dead: Season 2 debuted last December on Xbox 360 and PlayStation 3, but better late than never, Telltale Games recently released Episodes 1 & 2 on PS Vita! For all you mobile gaming lovers out there, here’s what to expect when jumping into Episode 2 of this undead story on Vita.

NOTE: Minor spoilers ahead. Play episode one before reading.

Season Two started off with Clementine being accompanied by Christa and Omid, but certain events find her on her own. Eventually, you run into a larger group of survivors that, understandably, find it hard to put their trust in a complete stranger. Episode One ended with Clementine and Nick having to escape a zombie horde and leaving Pete, Nick’s father figure, for dead. Or the other way around, based on the choice you made.

You deal with the immediate fallout of that choice and the writers give you a reasonable way to handle the situation. Episode One had hints of a mysterious figure named Carver and the episode wastes no time giving you answers. We also get to learn more about the other characters and the episode does a good job fleshing out most of them. There’s also a great sense of uncertainty with this new group. They take no time to warm up to you, perhaps a bit too quickly, but you’re still unsure of where their motivations lie. Throughout, I second guessed siding with the group because of that uncertainty.

There’s a lot happening in A House Divided, and because of that Clementine gets lost in the mix. She is an eleven-year-old girl in the molding phase of her life, so it’s reasonable for that to happen. However, the episode still left me feeling a bit cold towards her.

The episode has great surprise characters who pop up along the way. The group you are now a part of, is forced to coexist with a new group led by a familiar face. The way your group deals with the situation is what lends to those moments of ambiguity for Clementine and the player. Are these people who I decided to side with, good, or are they reactionary? 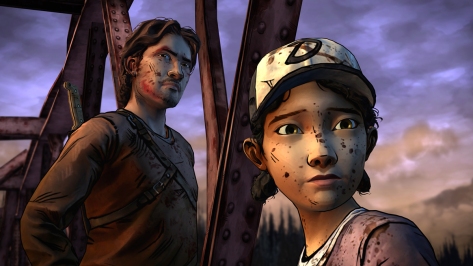 Personally, the writing of Telltale’s Walking Dead series has always had a tough time building these moments of conflict. However, story beats are mostly handled with finesse here. Although, there are times where things escalate a little too quickly. A more subtle approach would be a welcomed change. But as I’ve said before, when Telltale gets to those moments, they nail them.

The last episode was plagued with typical Telltale technical issues (most severely on Vita/iOS). I won’t waste time getting into that again. For more on that, read the review of Episode One.

I’m happy to say that this time around, I didn’t run into any glaring problems. The game didn’t stutter as much, but a big part of that could be due to the episode’s emphasis on storytelling, rather than action sequences. The Walking Dead is undoubtedly meant for the big screen. However, if Mobile is all you have at your disposal, don’t be deterred to play via iOS or PS Vita. Both handheld versions have a bit more stutter and pop-in, but The Walking Dead is an outstanding interactive drama on every platform it’s available.

The gameplay here, more so than ever before, relies on narrative. It feels like with each new episode, the action and explorations (or the “gameplay”) elements are rare. This is something to be fully endorsed, as the action can feel shoehorned in and is outside the realm of what Telltale excels at.

Decision making feels more and more muddled and ambiguous. But this isn’t a negative thing. There are so many characters, therefore you have a ton relationships to balance. And although this can feel frustrating, it’s a fact of life. You can’t please everyone and the game takes away you’re ability to even try to.

Telltale now more than ever, is doubling down on their ability to tell a story. It’s discouraging to see Clementine, our heroine, getting lost in the mix, but Telltale leaves you aching for the next chapter in this young girl’s journey.

Brett is one of MONG’s newest Editors. You can follow him on Twitter to hear about his exciting daily adventures!