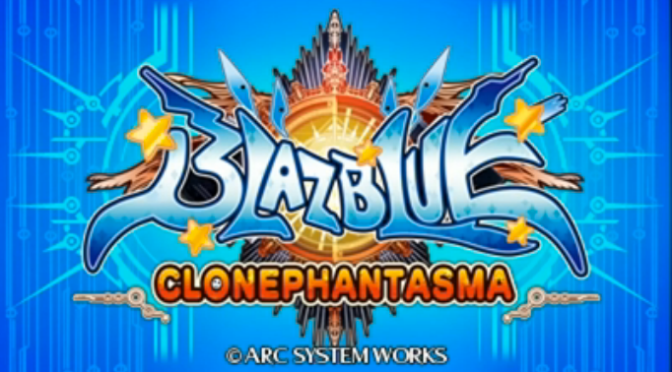 Fighters, Both Cute and Dangerous!

Sometimes players enjoy a lengthy, in-depth storyline that catches their attention. A game that has thousands of permutations with your choice of characters, skills, equipment, and areas to explore. Other times, players enjoy a simple game with one goal: fight enemies. Blazeblue: Clone Phantasma is one of those games that you can pick up and easily beat the snot out of some foes, all while looking like cute figurines.

Arc System Works, an established game developer and publisher, has been in the gaming industry since 1988. The company is widely known for their works with various series: Guilty Gear, Persona Arena, Dragon Ball Z: Supersonic Warriors, and of course BlazBlue.

The BlazBlue series is an accumulation of various 2D platform fighting games spanning numerous systems and generations. In addition, the series offers various 3D arena fighting games as spin-offs to the canon storyline. BlazBlue: Clone Phantasma is one of those spin-offs.

The story of BlazBlue: Clone Phantasma is extremely short and very unclear. In Story Mode, you must pick one of the ten main characters from the series and take them fighting through various rounds. Periodically, there will be a dialogue between your character to gain a bit of information with a subsequent fight. Essentially, whatever character you choose has no memory of who they are. I guess you can say they’re a “clone” of the original. I guess the premise that your character doesn’t know who they are nor who their rivals are can be humorous for veterans of the franchise. For players who have no idea what the series is (like myself), it was essentially just jargon in between fights. Since the storyline does not have any significant alterations based on the character you choose, it can become terribly repetitive and stale after three or four playthroughs. Timewise, each playthrough of the “story” ranges between twenty and forty-five minutes (depending on how many times you die).

The actual presentation of the game is fairly straightforward. The characters are designed well with enough attention to make their movements unique and not a cookie-cutter copy of one another. The same can be said for the levels and their terrain, which offer different challenges to overcome while simultaneously trying to win the fight. I didn’t really understand the locations at all, but after looking at previous games of the series, they quickly become identifiable – another nod to players of the canon story. 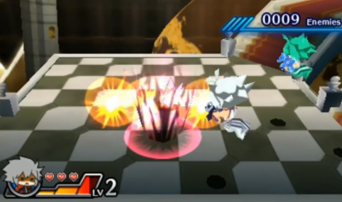 In terms of music for the game, it is pretty intense. It has several rock songs with a fast paced tempo that gets you excited to start pummeling your enemies. Character voices are unique to each character with various phrases. Since this is an indie game from Japan that was ported to North America, the phrases are still in Japanese. Though understandable (joke not planned), it still would have been nice to know what they’re screaming throughout the fight. For what it’s worth, the storyline is dependent on the dialogue that’s read, which translates well without grammatical issues.

With all this, the gameplay is happily simple. You move with the Circle Pad, zoom in and out with the d-pad and jump with B. Both the Start and Select button will pause the game. A, Y, and X are all attacking moves where you can use your standard attack, stun attack, and special attack, respectively. Each character has unique attacks for all three, in addition to specific characteristics (longer range of attacks, 360 attack, etc.).

In battle you are given three lives. Once youlose all three lives, you lose the round and are given the option to try again. In addition to just pummeling your enemies with your attacks, you can alter the battle by the items that randomly appear. Some, like the Panda-hat, will enhance your abilities, while others might diminish them. I really wish Arc System Works incorporated more items to fights since there are so few. If more items were utilized, it might make fights more unique and a lot less… well… repetitive.

There are two types of modes to play: Story Mode and Challenge Mode. As mentioned earlier, Story Mode is where you select a character and play through various levels to complete the quick story. In Challenge Mode, you are tasked with destroying all the enemy characters before they destroy you. When I saw Challenge Mode, I thought that there would be actual challenges to complete, kinda like random side quests or specific methods of fighting. This mode should have been appropriately called Survival Mode- maybe it was lost in translation.

There is also a Gallery section where you can see Awards (essentially achievements) completed, in addition to an  Illustrations section that showcases which characters you’ve completed Story Mode with. When I saw the Awards section, I was hoping that there would be tons of achievements to unlock. However, there was only 24, many of which are extremely simple to complete. Some awards include: Clear Story Mode, Blast Away an Enemy, Stun an Enemy, and Beat 50 Enemies. I unlocked most of the Awards just by playing the Story Mode twice, so it shouldn’t be too difficult to complete them all. 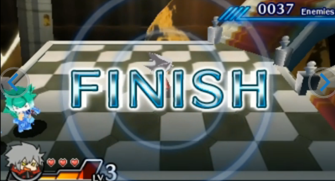 Though BlazeBlue: Clone Phantasma is a cute fighting game with multiple characters, it falls short in engaging battles and longevity. I’m sure fans of the series will pick this up at the Nintendo eShop for $5.99. However, I’m hard pressed to honestly recommend this game to any player for a particular reason.