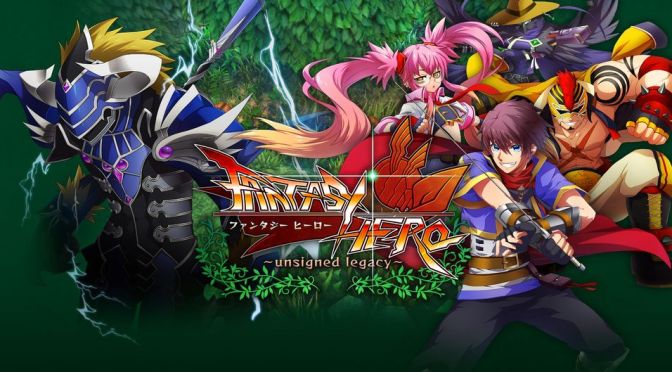 LOOKING FOR A HERO

Arc System Works is a developer with long standing ties to the video game industry, reaching all the way back to porting Double Dragon for the Sega Genesis in 1988. They have also worked on several well-known franchises such as the Guilty Gear series and the fighting franchise BlazBlue. Fantasy Hero: Unsigned Legacy is Arc Systems Works’ latest game, and is a dungeon crawler with a hint of Monster Hunter for the PlayStation Vita. While I have never played one of Arc System Works’ games before, I was definitely intrigued by Fantasy Hero, as it seemed like it might offer some twists in the well tread dungeon crawler genre. 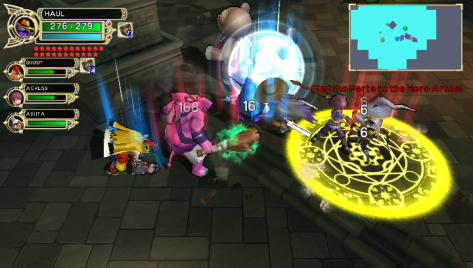 Fantasy Hero features a rather generic story that isn’t really anything too captivating. The game is set in a medieval-ish fantasy world that has been overrun by an invading alien force known as the Decoders. The protagonists have been in hiding for 12 years, until a discovery of an ancient artifact called the Hero Artes may turn the tides, and provides them with an opportunity to take back their world. The story feels like it is there just to move you from mission to mission, and does little to make your care about the world, or bring you in deeper. While it makes mention of the tragedies these characters have been through, the game never really stops to delve in long enough to provide any real connection to make you care about what happens to the characters in this game.

Where I can pay a compliment to Fantasy Hero is its character design. You have four characters to choose from: Acress Breathbeat, your typical sword wielding boy turned hero, Mask the Shout, an aging professional wrestler, Haul Keeling, a gun wielding Decoder with a mysterious past, and Ashta Little Husky, an orphaned mechanics whiz who does her fighting via a mech suit. Despite Acress, who serves as the prototypical action RPG character, it felt like the other three choices are refreshingly different than the warrior, wizard, rogue trope that tend to populate this type of game. As a result, there was a real pause when it came time to pick my character (I wound up going with the wrestler) as there were several interesting choices, and I could see it as a reason to go back and see what I missed with the other characters. 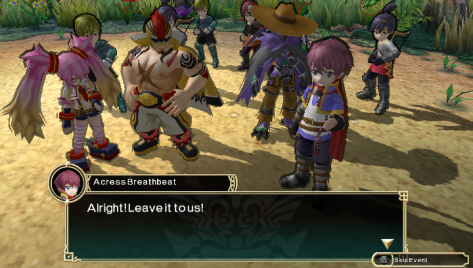 The gameplay is very satisfying. The controls in Fantasy Hero are simple and straightforward — you are given a weak attack, a strong attack, and an option to jump, which are all mapped to the face buttons, while additional actions such as the use of potions and special attacks can be quickly accessed with a press of the trigger button. In the beginning, Fantasy Hero could be more new-player friendly, as you are only given a quick introduction and sent on your way, while a bulk of the game’s deeper functions are left to be explained in various tutorial entries. But once I got past that acclamation point, I was dashing around the map, body slamming the enemies with ease. There is a deep upgrade system for each character that breaks out into three branching skill sets. It really felt like it gave you options on how you want to play your character, and there were more choices than you could ever make  in a single run through the game. There is also an equipment system in place, but it is very basic. Your only upgradeable item is your weapon, but there is a crafting system in place that allows you to improve weapons, and add a custom set of effects and bonuses to them. 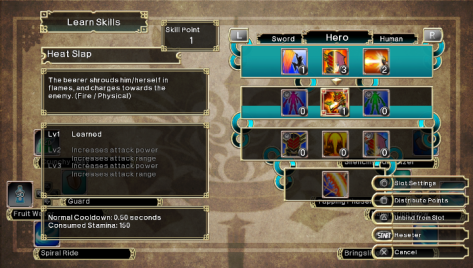 The missions for the most part are short and to the point, which is an attractive feature for a portable game. Fantasy Hero does recycle maps for its missions, so prepare yourself to spend a lot of time in the same areas, much like Dragon Age II. Unlike Dragon Age II, this is a game for the PlayStation Vita, so I find the recycling of these maps to be far more understandable and forgivable.

What is harder to forgive is the total lack of checkpoints in missions. While for the most part missions are short enough that this doesn’t really matter, there was some frustration in certain moments where I had been playing for 20 or so minutes only to find myself having to start the mission over again after a quick, and usually cheap death. This brings me to my other minor gripe with the gameplay. While I felt the difficulty at the base level was balanced, and progressed at an intuitive rate, it did feel like most of my deaths while playing the game were kind of cheap. It felt that instead of me dying due to a lack of strategy, it was usually due to being trapped in corner, helplessly being juggled by enemies until I died, without any recourse. Luckily however, these moments were few and far between. 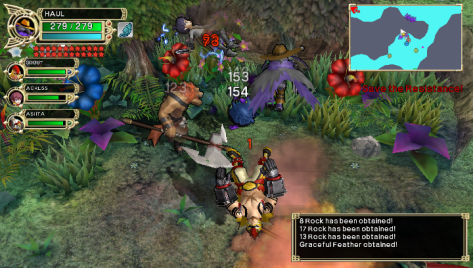 Initially I was a bit put off by the cartoonish visuals of Fantasy Hero. This can be attributed to the stellar artwork that was released before the game, showing off what looked like truly epic fantasy characters. What I got in reality was something that visually looked closer to the PC port of Final Fantasy VII. That being said, once I adjusted my expectations, the graphics were perfectly fine, but I do wonder if the choice of using cartoonish chibi graphics might take away some of the overall impact of the story.

The music on the other hand, I loved. The scores that were created for this game are catchy and enjoyable, which is an important quality, because as with the maps, you’ll be hearing the same songs over and over again. The voice acting is very good as well; it is clear that the actors turned in convincing performances. Though it should be noted that the entire game is in Japanese, offering English subtitles.

Fantasy Hero provides a good value. At time of this review I have put a little over 8 hours into the game, and in that time I was able to complete the main story, and do a bulk of the side missions. With multiple characters to play as, increasable difficulty levels on missions, and a new game plus mode, Fantasy Hero packs a lot of punch for just $14.99.

While Fantasy Hero: Unsigned Legacy isn’t a revolutionary step forward in the action RPG genre, it does serve the genre well. It gains a sense of freshness from its interesting class choices and its enjoyable and customizable gameplay. The game would have benefited from some sort of in mission checkpoint system and just a hair more attention paid to balancing of difficulty, neither of these things detracted from my enjoyment of the game. Overall, Fantasy Hero: Unsigned Legacy is a fun way to get your dungeon crawling fix on the PlayStation Vita, and a good way spend your time while traveling, or in between AAA releases this holiday season.

Adam Leonard is an Associate Writer with MONG. He is also the host of the Geeks are Go podcast which you can listen to here or subscribe to it on iTunes. You can also follow him on Twitter.