During today’s Nintendo Direct, the release date for The Legend of Zelda: Majora’s Mask 3D and a limited edition Majora’s Mask New 3DS XL was announced.

The game will be launching alongside the release of the New 3DS XL, on February 13th. The branded console also comes out the very same day and it looks gorgeous (see below). 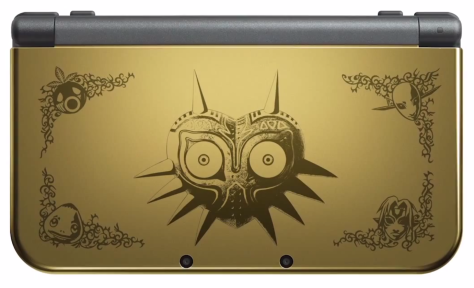 The console will not come with Majora’s Mask 3D in the US. However, in the UK, the game will be pre-installed onto the system.

The announcement of Majora’s Mask coming so soon was a great way to end the first Nintendo Direct of 2015. The console looks stunning and Majora’s Mask is a game I never got around to playing back in my Nintendo 64 days.

It’s unfortunate the game won’t be included in the US release of the Majora’s Mask 3DS XL but you can’t win them all. People in the UK, consider yourselves lucky.