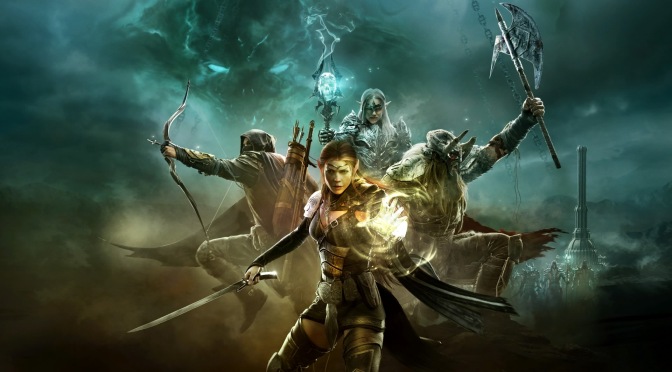 Now it has been approximately a month since the AAA MMO Elder Scrolls Online hit consoles. As this has been the first time many people have ever played the game, ourselves included, going into such a massive game is not a light undertaking to undergo for a full review. So, we have made the decision to separate the review into several parts. Now without further ado, here are the impressions the game has left upon us so far!

In terms of complexity, the main plot for The Elder Scrolls Online is actually quite an easy one to grasp. The victim of a mass sacrifice for Molag Bal, (a daedra that rules over the realm of Coldharbour and the overarching main bad guy) the story focuses on your search for your soul within Tamriel and the many adventures that you will come across along that journey. It is a very fitting set up for the first steps of an adventure in a well established franchise such as The Elder Scrolls. However, while in theory, this grand scope of a story across the entirety of Tamriel sounds like a good idea, from an early point within the game it is clear that ESO does ultimately struggle with some flaws in how it handles content as a large multiplayer game.

It is essential that this game should be viewed as an MMO before anything else. Otherwise, you will be sorely disappointed if you expect it to be the sequel to Skyrim we have been waiting to be released for years now. The freedom of choice and consequence are fairly restricted in comparison, so don’t go expecting to randomly killing NPC’s like you could in the other games. Despite that this is by large a “on the rails” type game, Zenimax does seem to have succeeded in channeling the feel of the universe as well as can be expected. The story missions and quests are pretty standard fare for an MMO, and don’t manage to vary much from fetch quests or killing X monster. I have admittedly only begun to scratch the surface of what ESO has to offer in regards of mission content, but I seriously doubt that Zenimax will change up the formula during the later levels. As a result, a huge portion so far feels like I am grinding for experience points, and that doesn’t exactly get me all that excited for the next hundred hours or so of content.

The presentation of these missions also has me questioning what message Zenimax is trying to communicate to the player, as a large percentage of the quests seem to be pushing for a more single player experience rather than as a group. So far, I have found little reason to play with friends, even though that is supposed to be the entire point. We shall see how this plays out, but it does cast some serious doubt on why I should care that this is a multiplayer experience, and could be a serious flaw later on.

One of the high points of my experience in The Elder Scrolls Online so far has been the overall space in which your character has to explore during quests and similar content. While the graphics are ultimately underwhelming in comparison to the “realistic” standard that Bethesda has put forth within the series so far, it is definitely far from unappealing to the eye. Personally, I really quite like the artistic style that Zenimax chose for this game, as it captures a certain charm that the previous style has never really had before.

Combat in ESO is a completely different beast from Skyrim as well. Instead of the standard pure hack and slash mechanics we have grown to love, Zenimax has added some depth to fighting with the focus on a system that consists of blocking with calculated attacks. It is not all that complicated, but it adds a nice layer of strategy to the combat system that was previously missing in my opinion.

Overall, my first month within the world of The Elder Scrolls Online has largely been a positive one. While the story content seems flawed in the way it presents itself, and lacks much variety, the large setting of Tamriel and fun combat make experiencing the content much more worthwhile. Here is to what the next hundred hours ESO has yet to offer.