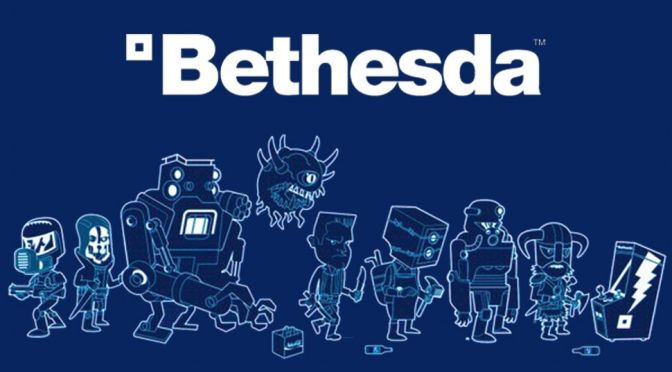 After last year’s amazing E3 conference, Bethesda was hoping to do it again, and for the most part, they succeeded. They showed off all the new games that had previously been announced and even a few surprises and one game that didn’t even get leaked. Bethesda was certainly better than EA’s weak conference.

After the pre-show hosted by Adam Sessler and Morgan Webb, Bethesda hit the ground running with the first CG trailer. After 11 years of nothing, Quake finally returns as Quake: Champions. Quake: Champions is the return of the arena based combat that the series is known for. Exclusively for the PC, it will be a multiplayer-only game that will have 120Hz, unlocked framerate, and unique characters. id Software did say that it will reveal more during Quakecon this August.

After recapping their successful year, Bethesda then showed off more of the upcoming Elder Scrolls Legends: The Strategy Card Game. It will support both single and multiplayer modes. They aren’t ready to announce the release date, but they did show off the intro, the single player and some more gameplay footage. For this week only, if you go the website and enter your email, you may be invited to the closed beta that is happening right now. Elder Scrolls: Legends will be release on iOS and Windows.

With the success of Fallout 4 last year, Todd Howard assured fans that there will be even more updates to the game with new DLC coming. Part of the free updates included contraptions that will make your own machines like elevators and conveyor belts. That update will arrive next week. The other big update is the ability to create your own Vault-Tec vaults. The cool thing about this is that it feels like a much bigger version of Fallout: Shelter, but inside the main game of Fallout 4. That update will arrive sometime in July. The last thing they teased is the next bit of DLC for the game, Wasteland Vacation. There was no release window for that one yet. Speaking of Fallout: Shelter, there is a major update coming in July with the game coming to PC sometime in July 2016.

The last news that Todd Howard announced was something that was in rumor mode these past few days: a new version of Elder Scrolls V: Skyrim. Skyrim: Special Edition is a fully remastered version of the PS3 and Xbox 360 game and is coming to PlayStation 4, Xbox One and PC. The exciting bit of news this has and what sold it for me was the mod support that will be coming to consoles. It’s looking great and I can’t wait to see some gameplay with the mods added in.

One of the best surprises of the Bethesda conference was the announcement of the reboot Prey. It’s coming in 2017 for Xbox One, PlayStation 4 and PC and it’s about an experiment gone wrong as an evil alien force is infiltrating the ship. You play as Morgan Wu as he tries to survive and figure out what is going on. The game is being developed by Arkane studios.

After releasing DOOM a month ago, id Software announced that there will be even more content coming for the Snapmap feature. Other features like new multi and single player modes will be arriving free to make the Snapmap making it deeper than before. Then they announced the first premium DLC for DOOM. This includes new maps, a new demon, new weapons and new customizations. And, for this week only, you can download the First level of single player iin DOOM. This is something I will definitely do as I haven’t played DOOM myself, sadly.

Another game that came out last year for consoles was Elder Scrolls: Online. They didn’t speak too much about it, but they did say that it will be arriving for Japan on June 29th. The first piece of major news they announced is a new DLC pack called Dark Brotherhood. In Dark Brotherhood, you are found by the Brotherhood and you must try to join their organization of assassins. This DLC will arrive this Tuesday for all players.

Then coming soon, there will be a new feature called One Tamriel. One Tamriel will allow players to go anywhere and do anything they want regardless of level cap. If they want to do a late game quest early on, they can. This is the first time an MMORPG has done anything like this and it’s coming out this Fall.

With VR coming, Bethesda spent a little time on it and while they didn’t say too much, they did say that DOOM and Fallout 4 is playable at their booth. The big news about all this is that Fallout 4 will come to the HTC Vive in 2017.

Lastly, the game of the hour was Dishonored 2. Arkane and Bethesda revealed a lot about the new game in the franchise. You can either play as Emily Kaldwin or Corvo Attano, who was the protagonist in the first game. Both players can offer up different play styles and different paths they can go on. The game sets players in Karnaca fifteen years after the events of the first game. Emily Kaldwin is dethroned by an enemy and must take back her land and reclaim her title. There will be new powers, weapons, customization and a deeper skill tree.

One of the coolest mechanics in the game is time travel. You’ll get a device that will let you travel between the past and the present. This offers up many ways to explore and get past enemies in the game. Dishonored 2 is coming November 11, 2016 for PC, Xbox One and PlayStation 4. If you act now (at the time of this writing) you can get the limited collector’s edition. Once they are gone, they are gone for good. For everyone else, for a short time, you can get the Dishonored Definitive Edition for free if you pre-order Dishonored 2.

Then the Bethesda’s E3 conference ended. This was a very good conference. They showed off a few surprises and showed more to those that were leaked. It wasn’t mind-blowing like last year, but considering that most of it was upcoming updates to games already out, I think they did a good job. Bethesda and its partners are a damn good group of developers and this shows why. On a side note, much respect to the rainbow ribbons.

Jesse Webster is a Senior Writer for MONG and is now ready for the onslaught of E3.