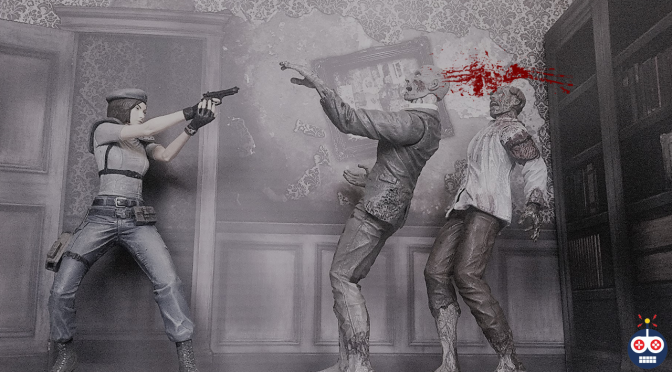 We all collect something, whether it be neon colored bow ties, oversized novelty glasses, The Golden Girls trading cards, or even something as weird as action figures. Heck, some of those weirdo action figure collectors even remove their toys from the packaging and arrange them into a badass battle scene. For this special breed of collector, Extreme-Sets has a sweet new line of pop-up backdrops. Shall we take a look at one?

Okay, I have a confession to make — I’m one of those aforementioned weirdos. Yes, I take my large collection of action figures and try to recreate scenes I see in my mind’s eye, but reality never quite lines up with that mental image. Even the most well-sculpted characters still look like toys placed onto a boring shelf, no matter the gory event depicted by their poses. My Resident Evil (RE) collectibles always needed that extra something to jazz up the display, and that’s where Extreme-Sets comes in.

It has recently released several pop-up diorama backdrops with which any collector can create the ultimate display. Each set consists of multiple panels made from cardboard and printed with high-quality designs, capable of being combined to erect a specific type of location for your 6” or 7” action figures to inhabit. The moment I saw the Abandoned House set, I knew it was almost tailor-made for my own bloody collection. Did it measure up to expectations? Well… a spoiler like that would defeat the purpose of this review, don’tcha think?

When it comes to the box an item can be packaged in, I’m a fan of both possible extremes. As someone who grew up with Playmates’ Teenage Mutant Ninja Turtles toyline in the 90s, I love those bright boxes with garish colors and flashy artwork used to coax the money from someone’s wallet. On the other end of the spectrum, a basic brown box with minimalist printings can be just as effective. Extreme-Sets opted for the latter with its products, placing the cardboard panels in a simple box with a slipcover.

One side of the box bears the Extreme-Sets logo in bold black ink, while the other features the name of the purchased set, an illustration of the set’s theme, and a cutout which gives a preview of the panels inside. It conveys the idea that Extreme-Sets has great confidence in its product, and also allows you to dispose of the box without that nagging voice in your head. Y’know, the one that insists it would be a crime against artists everywhere to throw away a well-decorated box. 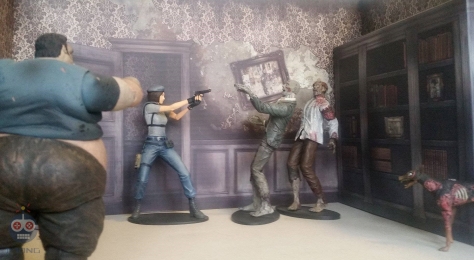 The Abandoned House pop-up set consists of six panels (12” tall, and about 20” wide) as well as an additional bookcase for decoration. The bookcase is essentially a small, rectangular box that must be flared open, at which point you fold in the top and bottom flaps. Voila! If only Ikea’s products were so easy to assemble. That said, the cardboard is so thick and sturdy that the flaps stubbornly try to return to their flattened state, so you may want to use a tiny bit of scotch tape to keep them in place.

The panels are even easier to assemble… in theory. Each one features two large tabs on the left side, and two slots on the right side. You need only to insert the tabs of one panel into another’s slots to begin building your diorama. The trick is, this can seem difficult at first as the slots are made to accommodate the tabs with a very snug fit. The initial assembly will be slow, but the tradeoff is a connection that will not pull apart on its own.

This is what allows you to truly create your own scene, as connected panels can be bent to form rooms and connecting hallways. Even when a panel is bent at a 90 degree angle at the joint, the tabs refused to disconnect unless I intentionally pulled them apart. That’s some solid construction.

There are no instructions included in the box, but that’s primarily because the scene you build is entirely up to you. As I only had space to use half of the panels (the whole set measures about 10’ long when placed side-by-side), I opted to build a partial room which transitioned into a windowed corridor. My photos should convey this nicely. 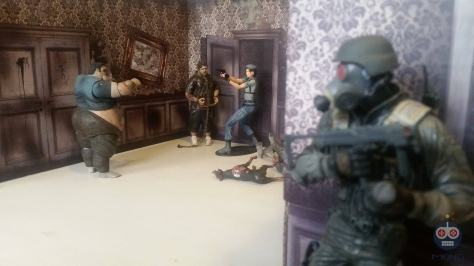 It should be noted that the tabs are completely optional, and the panels can also look pretty good when simply propped up end-to-end, overlapping just enough to hide the tabs. But where’s the fun in that? 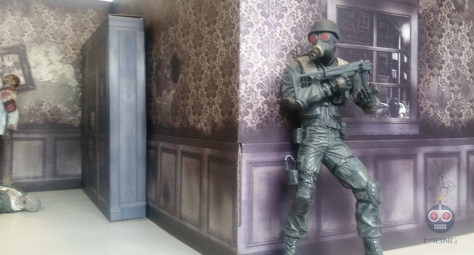 Each and every panel is unique unto itself, while still carrying a cohesive theme. The same realistic wallpaper pattern carries through consistently across every panel, featuring varying degrees of damage and decay to truly convey the abandoned house aesthetic. One features printed double doors, another bears two windows with a glimpse at a post-apocalyptic nightmare outside, and so on. The quality of the prints is impeccable, with no noticeable pixelation or other blemishes.

However, you can see the impressions from the middle layer of cardboard across the surface when viewed up close, as you’ll see in several photos. This isn’t much of an issue in person, as everything has a nice, eerie sense of realism from the typical viewing distance. As with any piece of artwork, the flaws stand out more the closer you get. A smooth matte finish ensures very little (if any) light reflects off the printed art, meaning your constructed scene will look great from any angle and in most lighting conditions.

Should you choose to build a complex display, the joints don’t stick out like a sore thumb as you might expect. This is due to clever design work, where each panel can blend almost seamlessly into the next. The overlapping edges will be visible at certain angles, but it hardly detracts from the stellar appearance, and your collectibles will likely conceal the problem altogether. The corrugated edges of the tabs may become visible with certain severe bends and corners, and that may bother some collectors out there, but I didn’t even notice until I began looking through my photos. 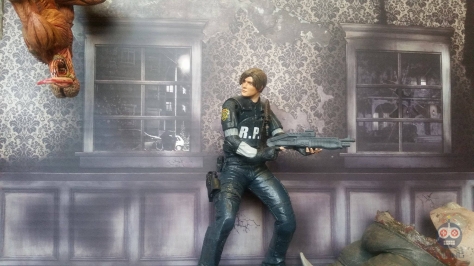 With a little bit of tinkering and experimentation, I settled on a display I was quite happy with. The resulting diorama looks ripped straight from a classic Resident Evil game, making my collection of RE figures look right at home. I would have liked for some flooring panels to be included in the set, or perhaps offered separately, but I’m thrilled with the Abandoned House as-is. 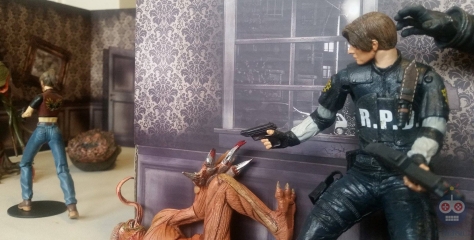 This is a tough aspect of the product to gauge, as there really isn’t anything comparable available. Up to this point, collectors have had to purchase large, gimmick-laden playsets intended for kids if they wanted a detailed backdrop for their shelves. These often come molded in rainbow-colored plastics with many of the sculpted details left unpainted, looking quite poor when placed alongside collectibles made for adults. They also tend to be far too expensive. Handier collectors take it upon themselves to create a diorama from scratch, but the materials can be quite costly, and it takes a lot of time to finish such a project. 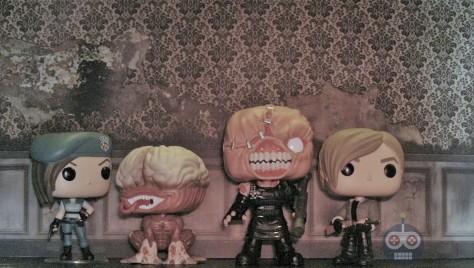 Extreme-Sets’ pop-up dioramas are a happy medium, looking quite nice to the human eye, taking little time to set up, and seem a great deal more affordable than the options listed above. The Abandoned House set runs $34.99 plus shipping when ordered directly from Extreme-Sets’ website, and I can honestly say it feels worthy of that price. With so many large panels available in the box, not only do my RE collectibles have a nice display, but so too do my Evil Dead, DC Comics, and The Walking Dead items. 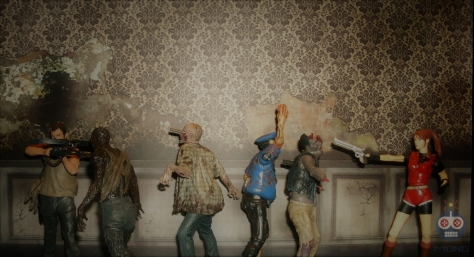 While they may be intended for 6”-7” scale collectibles, the two panels depicting bare walls offer more flexibility than that. They make ideal backdrops for my RE Funko POP! vinyl figure collection, fit in well enough with 1:6 scale Hot Toys or Sideshow collectibles, and even look okay with the 5” McFarlane Toys The Walking Dead action figures (in addition to the 5” Toybiz RE toys from the 90s). If you happen to collect any of NECA’s plentiful horror-themed action figures, such as A Nightmare on Elm Street or Friday the 13th, those are perfect fits as well. Not every collector cares about creating a scene with their displays, but to those of us who do, these sets have great value.

I wasn’t sure what to expect when I first heard about the Extreme-Sets pop-up dioramas, but the quality speaks for itself. The cardboard is thick and sturdy enough to ease any worries about durability, and the designs look simply fantastic when placed on a shelf. What’s more, the size and number of panels have spruced up several collections at once. That goes far beyond what I expected out of a single box of cardboard panels, and I look forward to getting my hands on the other Extreme-Sets offerings. 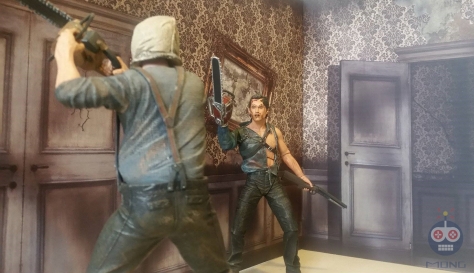 *This product was supplied free of charge for an honest review.