After much speculation, hope, and excitement, Pokémon Company officially announces legendary Pokémon for

Pokémon GO.In an emotionally dynamic trailer, similar to others of the game, Pokémon Company showcases a hoard of players who receive a “legendary pass” and a timer on a gym. Once the timer elapses, a splash of legendary birds appear. The trainers throw everything they have at the creature in hopes of quelling it in an attempt to capture it. Happily, they all capture the Pokémon and a wave of excitement resonates not only in the commercial, but within myself as well (yes, I’m being a tad-bit emotional.) 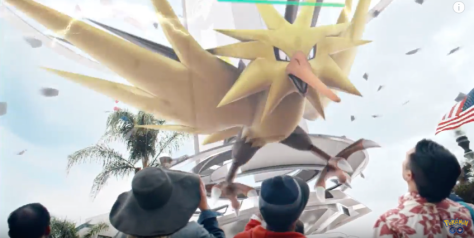 On the Pokémon GO website, they elaborate that the legendary Pokémon will first be showcased and have the ability to be captured at Pokémon GO Fest in Chicago on July 22nd. However, in order for this to occur, players at Fest and players around the world must capture enough Pokémon (exact number hasn’t been released). If this occurs, the Pokémon GO Fest patrons will be able to capture this Pokémon first, then it will be available for raids around the world afterwards.

Niantic and Pokémon Company also announced that they will be livestreaming Pokémon GO Fest with challenge updates, interviews, and the reveal of the first legendary Pokémon.

My Opinion:
Damn you Pokémon Company, you are absolutely nailing the emotional punch with these trailers. The legendary raids have been a long standing theory and now it’ll be out in the wild. I’m somewhat heartbroken that I won’t be in Chicago this weekend (though I will be there in two weeks), but I look forward to seeing who the legendary Pokémon will be. My money’s on Ho-oh!