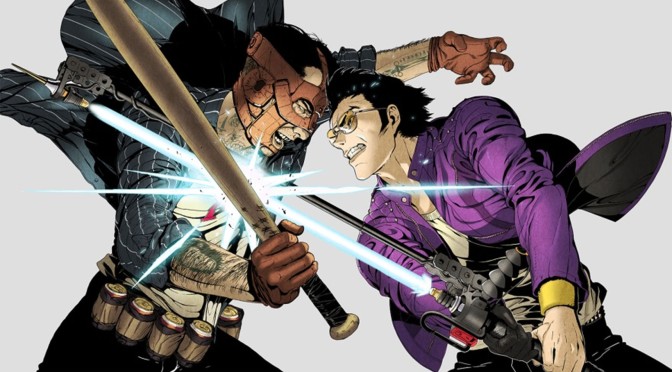 It has been a while since his last appearance, but everyone’s favorite beam katana assassin is back. Travis Touchdown returns to gaming action in the fittingly titled Travis Strikes Again: No More Heroes.

Director Goichi “Suda51” Suda returns to helm Travis’ latest adventure as he has to deal with The Bad seeking revenge on Travis for the murder of his daughter, Bad Girl. Before the action can fully heat up, the two men are sucked into a mysterious gaming console.

Check out the announcement trailer below and look for Travis to strike back in 2018 exclusively on the Nintendo Switch.

I was a fan of the original No More Heroes and it’s good to see Travis return. These are the type of games the Switch needs to fully develop its lineup outside of the stellar Nintendo releases. Original titles developed for the Switch are much more likely than hoping insert 3rd party publisher brings over insert big AAA game.  Travis playing Hotline Miami in the trailer was cool to see and talk of indie developers collaborating with Suda51 on the levels in the game is very intriguing.