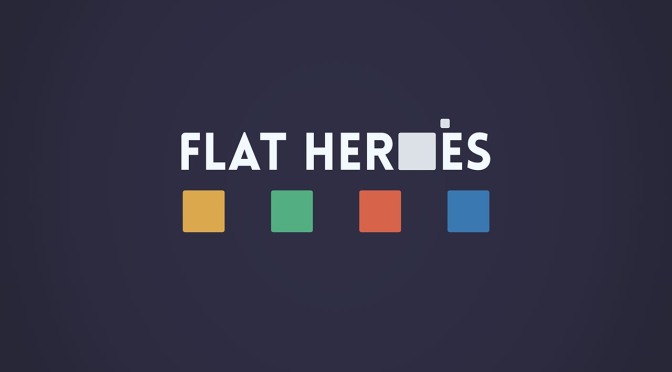 Not All Heroes Wear Capes

Flat Heroes, by Parallel Circles, provides a deceptively challenging adventure through a minimalistic approach. A loosely tied story, paired with a dynamic multiplayer system provides a quick-paced experience for players to enjoy.

Presented as an action-arena game, Flat Heroes’s Campaign Mode places players as a 2D square on a journey to towards completing ten worlds with over 300 masterfully created levels. There’s not actual story nor dynamic characters – just a square trying to survive a level. The levels start off fairly straightforward; avoid lasers or explosions and complete the level after a few seconds. However, the difficulty begins to rise and more elements are included with variety of enemies and complexity for the single-screen levels. I was forced to jump, cover, and occasionally attack in order to complete individual levels. The end of each world also consists of a boss fight, challenging players to apply all the knowledge learned up until that moment to conquer the 2D creature.

The actual mechanics of the levels are what pushed me the most – not the loosley contrived story. The gradual rise in intricacy kept me engaged enough to pursue the next level – the eventual calamity of it all was oddly satisfying, given the simplistic nature of the layout. I was constantly fighting myself with the  “just one more level” every time I wanted to take a break. This, paired with quick respawns, gave me an immediate jolt to try again.

If Flat Heroes’s tenuous story doesn’t entice, the allure of Survival Mode could. Within this mode, a preset order of event occurs within a level, and it’s up to the players to stay alive as long as possible, resulting in a Global Ranking. Unfortunately, there is only one set level available to start plus a daily level that changes. So if this set level doesn’t hook you, like it didn’t for me, then you’re going to have an unsavory experience to try and unlock a new one through the necessary grinding of said level. 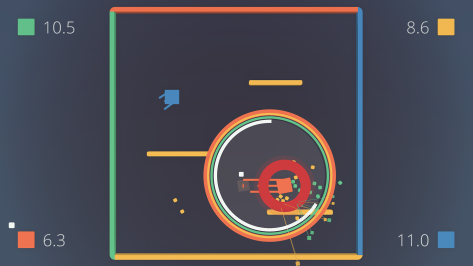 The pinnacle of Flat Heroes is the multiplayer component in Survival Mode and Versus Mode. With up to four players playing locally, each person can either collaborate or sabotage each other for bragging rights. I whisked a few friends to try this out and before we knew it, each colored square was bouncing across the screen, cascading with explosions of the others. Since these modes were quick to pick up, it only took seconds for the craziness to occur. This, paired with the short lengthed levels, gave plenty of people a chance to play and enjoy Flat Heroes.

With a simple pick-up-and-play strategy, Flat Heroes offers depth with it’s deceptively stripped down aesthetics. Players who enjoy a puzzle-like experience through a single-screen arcade adventure can resonate with Flat Heroes, despite some grinding and repetition.

This game was reviewed on Nintendo Switch with codes provided by the publisher. For more information about what the score means, check out our official review scale.