Runbow, developed by 13AM Games and Headup, is a chaotic, fast-paced, and fun platform-brawler with a colorful assortment of shenanigans. With the varied game modes, and multitude of customization, Runbow is the ideal party game that will encourage everyone to engage in the festivities. 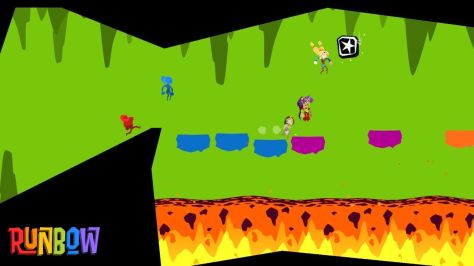 Runbow’s highlight is its core gameplay of platforming with a colorful twist. Every few seconds, the background changes colors, allowing certain platforms to either disappear or reappear (similar to the color wheel of Hue); if there’s a light blue platform and the background turns light blue, then the platform disappears and isn’t available. This forces everyone to stay on their toes, constantly move for survival, and make an effort to be the last one standing. It took me a few rounds for this concept to click, but once I had my moment of clarity Runbow’s appeal suddenly emerged. I found myself screaming at the screen, nudging a few of my friends, rocking out to the stellar music, and gloating at my moments of triumph! 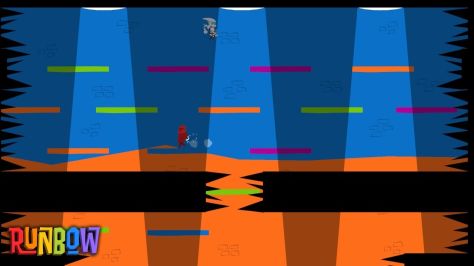 With this core mechanic, Runbow presents a variety of game modes each with their own specific goals. King of the Hill, Run, and Arena each offer a calamity of chaos. My favorite mode is by far Run, where players use their platforming skills to reach the end of a bite-sized level and be the first to graph the trophy. The moments of each character punching one another, frantically running towards the trophy really had the blood pumping. Since each round usually lasts between 20-40 seconds, matches can end after a few minutes for quick turnarounds to keep things moving. Additionally, players can customize the amount of rounds, types of abilities, and songs for even more variety in gameplay. The multitude of modularity is really fun to experiment with and find the perfect fit for the playstyles at hand.

Runbow really shines when played in couch co-op mode. Throughout the numerous times I (graciously) encouraged my friends to partake, each person was able to pick up the game and quickly join in on the craziness. Before I knew it, the PlayStation 4 became the center of the party and people were calling ‘next’. I customized the rounds to be quick and chaotic, maximizing the amount of players and quick pace of the game. As I’m writing this review, one friend messaged me asking if he can play it on his Nintendo Switch – which I happily responded in the affirmative. Runbow also has up to 9-player matches online, where the shenanigans are exponentially more chaotic, for people who want that type of experience. 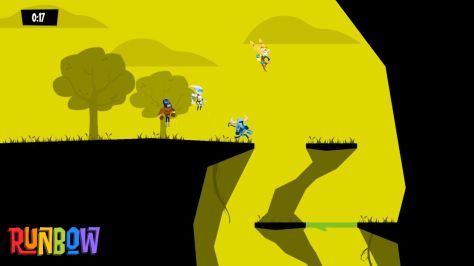 Adventure mode is the main campaign that has over 100 designed levels with specific goals like platforming to the end of the level, collect a certain amount of coins, or defeat a certain amount of enemies. Though this mode offers a loosely formed story mode in Runbow, it presents a much more linear experience. This experience is represented by four distinct posters and the ultimate goal is to complete all the posters, all in an effort to take down Satura, an evil femme fatale. These posters are broken down into 35 segments and players can choose a path to get towards the boss level. This provides some great opportunities to circumvent a difficult or troublesome level to keep the momentum moving. Also, once you complete a level, you earn ribbons based on your speed; the faster you complete the level, the more ribbons you earn. This provided some great replayability on some levels that I enjoyed. However, the levels started to get a bit repetitive and weaned off the excitement.

If Adventure mode wasn’t enough of a challenge, Runbow offers Bowhemoth mode that is a continuous myriad of hair-pulling levels as you traverse through the literal belly of the beast. This mode not only has the toughest platforming in the game, it also shows the amount of deaths and time you’ve spent. Since there’s no save option, this requires a one-time run, and no – this is not going to be a quick one the first time around.

Regardless of the mode, there are a plethora of unlockables within Runbow, to achieve. Beautiful concept art, character costumes, and numerous indie characters can be unlocked and used within the game. I was utterly surprised with all the indie tie-ins,  including Shovel Knight, Shantae, Freedom Planet, among others that I don’t want to spoil.

Runbow is an amazing platform-brawler that really excels with its multiplayer craziness. This, combined with the variety of modes and customization creates ample moments where friends can enemies alike can really enjoy themselves!

This game was reviewed on PlayStation 4 with codes provided by the publisher. For more information about what the score means, check out our official review scale.