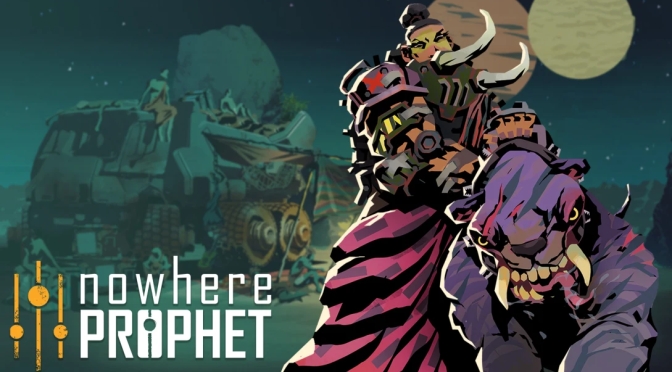 Nowhere Prophet, developed by Sharkbomb Studios and published by No More Robots, is a challenging card-based roughelite strategy game where surviving and escaping an Indian-inspired wasteland is paramount for success.

In this post-apocalyptic world, the protagonist hears the voice of an AI of a falling satellite and implores them to traverse towards the Vault – an ancient crypt, that’s conveniently located across a desolate wasteland and territories of combatant human factions.Though the story doesn’t stay in the forefront for long, the world building and atmospheric details had me curious for more.

The gameplay focuses on a procedurally generated branching map where various narrative ‘events’ occur that can benefit or cause troubles to your caravan of characters. Some events could ask you to participate in a ritual, entice you to investigate a strange item, or just be a straightforward scrimmage with an enemy convoy. These were an intriguing counterpart to the battle system, weighing just as heavily in their outcome as anything else in the game. With this, choices also include  balancing your finite resources and constant tension towards getting to the end of each segment of the map.

The highlight for me was the intricate card system and customizations with your character and convoy. At first glance, I was a bit bummed that you only start with one and must unlock the others to experiment. However, since the fights are so brutal (even at the lowest difficulty), it really forces you to get a handle of all the gameplay mechanics and subtleties before you can go off the wall and experiment away. Plus, with 10 different convoys, 4 Prophet classes, and over 300 cards, there’s a lot to absorb and master.

Nowhere Prophet has a lot going on with various resources to manage, cards to understand and master, and battle mechanics where one small misstep will wreak havoc. It is not for the faint of heart, but also a challenging game to sink your teeth into. I’ve played about 10 hours on the Switch version and still feel like I’ve scratched the surface. Luckily, I’m a glutton for punishment, so there’s more runs in my future. Check it out on Xbox Game Pass, PlayStation 4, Nintendo Switch, and PC on Steam.

A copy was provided by the publisher for the purposes of this feature on Nintendo Switch.

A version of this feature is also posted on Six One Indie.