A Great Bridge Worth Crossing

When I first heard that an animation studio was shifting gears to create a video game, I really didn’t know what to expect. Would it be only cutscenes? Would there be bad mechanics? Would it just be riddled with performance issues? Luckily, Ember Lab quelled all the possible discourse with an intriguing and captivating game called Kena: Bridge of Spirits.

Kena is a Spirit Guide who’s charged with helping those who are having difficulty moving onto their next lives, whether it be from unresolved issues or a stubbornness to leave. Kena: Bridge of Spirits follows her as she helps spirits while also searching for a sacred mountain shrine that will hopefully help the dying land all around. There are a few characters that we meet along the way, but instead of having several hours to get to know them, Kena: Bridge of Spirits hits the ground running and finds a way to make them all immediately interesting, endearing, and gave me a chance to be quickly invested in all of them. The fantastic animations, voice acting, and expressions of the characters helped this along, and allowed for some powerful quiet moments with few words spoken.

Even though Kena had minimal introduction, I found myself immediately on her side within the first opening moments of the game. The introductory beats didn’t feel like a typical here’s-how-to-play-the-game but rather showed players who Kena is, what she can do, and why she’s doing it (though I wish more attention was given towards character development for Kena). I’m hard pressed to think of another game that does this opening sequence so well both in a mechanics introduction as well as an attention grabbing adventure sequence.

Through the mostly linear adventure, we’re introduced to several large swatches of areas with their own arcs to complete. These story arcs focus on a spirit that needs help moving on and Kena, with the help of a mask for each person that passed, works to not only help the spirit but remove the ominous darkness out and purity back to the area. I enjoyed each of these story arcs quite a bit, with each serving an emotionally gripping conclusion. The story of Kena: Bridge of Spirit felt to me like an epilogue to a crestfallen story. A terrible event happened that brought darkness to the area and Kena has to help the spirits come to peace with themselves before moving on. This somberness with a dash of hope still sits with me days after completing the story. For some, this might just be a glossed over notion, but for me, it’s what elevates the 10-hour story and writing to new levels.

Aside from the deeply impactful story, the graphics of the game absolutely shine on PlayStation 5. The character models are beautiful with deeply expressive movements, world design is varied and purposeful with mild environmental storytelling, and movement of all characters (both in combat and out) is seamless and indicative of a Pixar-level creation. The background of Ember Lab’s animation team is showcased wonderfully in Bridge of Spirits and only gets me more excited for future projects from the team. The one big drawback I kept encountering was the uncertainty of distinguishing items that can be jumped on versus purely aesthetic. The few times that this happened, I had an instant death, but was quickly brought back in. Additionally, some prompts (to open chests, interact with, etc) were extremely small – larger prompts or the ability to adjust can help and allow for easier accessibility within the game

In addition to the maneuverability within the world, I really enjoyed many of the environmental puzzles to advance the story. These mini puzzles were very reminiscent of 3D Zelda games, albeit a little bit simpler. I do think that any increase in difficulty would have made it more frustrating than enjoyable, so Ember Lab nailed the balance between the two. Though, once you figured out one big puzzle element, you kinda figured it out for all of them, which got slightly old, but for a shorter game was just enough.

The biggest sticking point to Kena: Bridge of Spirits that I keep going back and forth on is the combat elements. As a Spirit Guide, Kena has a mystical staff that allows her to not only use melee attacks, but also form a protective bubble-shield as well as call on some creatures for assistance. These adorably adorable creatures, strangely called The Rot, are sprinkled all around the world for you to find and invite on your adventure. Contrary to their name, The Rot are so freaking cute that I kept cooing each time I found one. Their giant eyes and fluffy demeanor scream Pixar cuteness and if that was the objective, Ember Lab absolutely succeeded.

Anyway, back to combat.

In addition to the powers mentioned above, you also gain a few additional perks and powers that can deepen the options for you and your play style (kept purposely ambiguous for you to explore for yourself). But outside of Kena’s powers and weapons, you can call upon The Rot that have joined you to offer additional gameplay elements towards fighting. The drawback is that you must build up your ‘Courage’ meter to use these abilities, this way you can’t just spam their attacks for quick/ cheap wins. However, dodging and using the shield felt very inconsistent when I was playing and ruined most of the flow I had once I hit a major boss. After some practice with the boss, I got a bit better, but after three hits I was down for the count. Luckily, I was able to persevere, but the lack of precision in attacks and countering was less than ideal. These frustrations were mildly alleviated with increased health opportunities and mastery of more abilities, but the frustrations still remained. 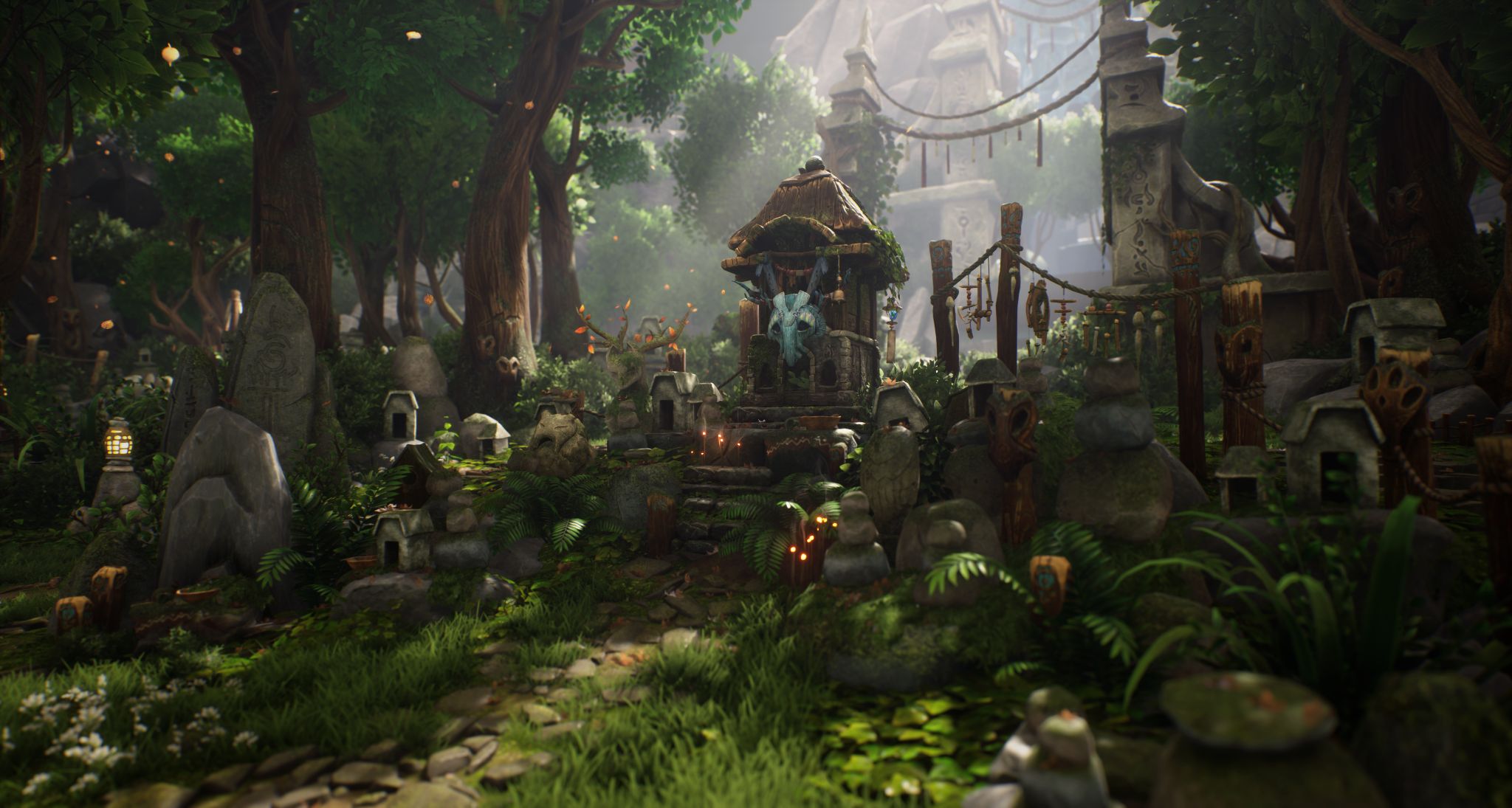 Another major struggle I had with combat was the lack of visibility and enemy tracking when there were several coming at you. In many adventure or combat-heavy games, there are usually visual indicators, vibrations from the controllers, or noises to indicate enemies behind you or about to attack. These attention-grabbing prompts would be enough to quickly redirect your attention and juggle the enemies more easily. Unfortunately, Kena lacked this. I’m hopeful that future games (and hopefully more in this series) will adjust to this and make managing fights more user-friendly.

Kena: Bridge of Spirits is a wonderfully crafted adventure that captures an emotionally gripping story with solid gameplay, thematic score, and beautiful graphics. Though the combat was imprecise, it did not hinder an overall great experience from the game. I applaud Ember Lab for their successful first game and look forward to many more adventures from them.

A copy was provided by the developer for the purposes of this review on PlayStation 5.

A version of this review is also posted on Six One Indie.