It has come to the point in time when games with zombies have swarmed the gaming industry like a bunch of bees.It’s even coming to the point when game franchises that didn’t have the undead like Call of Duty and Saint’s Row have decided to shoehorn them in. Dead Nation: Apocalypse Edition decides to bring the zombie fun to the PlayStation 4 after their success with the launch title Resogun. So, will the PS3 port bring some life to its newest brother, or will this game just become dead on arrival? 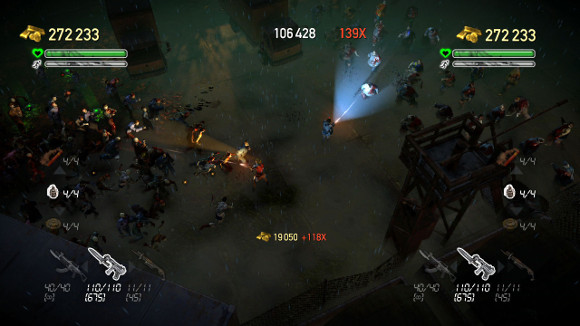 Dead Nation is from the people at Housemarque, and like their newest title Resogun, this game’s story is not its strong suit. In the story, you can follow two protagonists, but the story is generally the same: you are a person immune to the zombie infection, and you are trying to get to a scientist who is developing the cure. Even when this game was initially released a generation ago, the story was fairly generic and not something to write home about. Since the story was presented in images between levels, it really didn’t stick with me at all.

Another aspect of the world that contributes to the story are certain crates that contain information about the world that has gone to pieces. Although this provides some context as to what the protagonists are going through, it really doesn’t fit the main story at all. While the main story presents itself in a serious tone, the crates provide a more comic side to the universe, which makes the overall tone confusing to pin down. 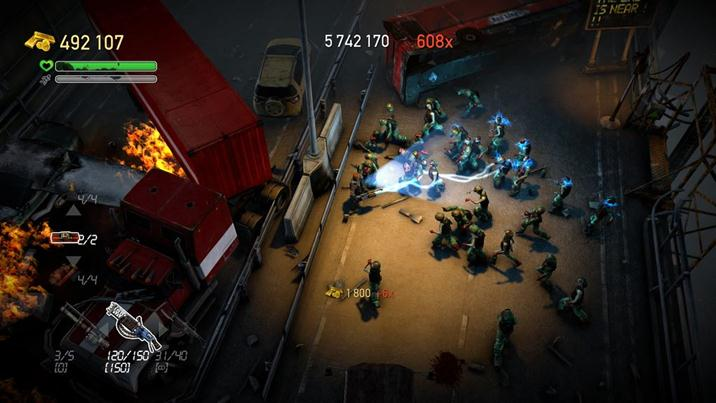 Apocalypse Edition does bring in some upgrades from its PS3 counterpart, with one being updated graphics. Even though Dead Nation is a twin stick top down shooter, the graphics still look fairly good and the particle effects are right on par with Resogun. The cutscenes may not be anything to look at, but the zombies still look stunningly dark and mysterious, especially with the atmosphere it uses. 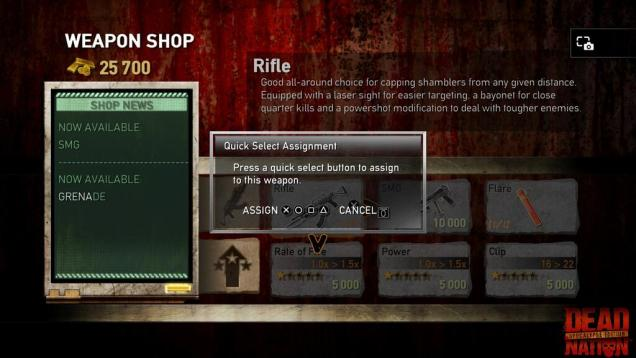 The menus and loading screens are nothing special either, and should have receive an upgrade to the PS4 version. The music and sound are also not particularly noteworthy, but they work to bring the atmosphere together. The voices of the main characters work, but it is not award-winning either.

The one aspect that this game nails is its gameplay. Whether I played it single-player or co-op with a buddy, I thoroughly enjoyed mowing down zombies in an open area, bottlenecking them through a tight space, or trying to take down a large cutter that would slice me down in 2 hits. The game’s mechanics work well, with the arcade-style score and multiplier at the top. I felt awesome racking up a 250x multiplayer after slaying a bunch of zombies without it being some casual occurrence, as this game uses darkness and a variety of zombies to keep me on my toes and to keep the combat from being repetitive. The weapons have a great variety, with a rifle, shotgun, rocket launcher, and even a blade gun. Grenades, mines, and even flares are available for more weapons to rid the world of the undead pests.

When I say “rid the world”, I mean the world. After each level, the score is uploaded, and rather than just a leaderboard, Dead Nation takes your progress and combines it with the other players in your country. This makes what you are doing feel like it does more than just kill a few monsters. I almost felt some patriotic pride seeing many Americans playing the game together and wiping out the infestation from the US.

Another great addition to the game gives many people a chance to pitch in to a usual game. If somebody plays the game and streams it on Twitch or UStream, anyone who watches the stream can help out or laugh maniacally as they can dictate how many zombies you can expect to see. This not only provides other people the ability to contribute to my game, but also to lets me interact with an audience who would most likely see me dead. This concept is interesting, and I would like to see other games try it in the future.

Overall, this game is basically like a Resident Evil game with an arcade twist. The story is generic and tone-deaf and the voice acting is nothing of note, but the visuals are appealing and the gameplay is solid. Playing co-op is a fun experience, and even in single-player, the game provides a ton of arcade fun, either by playing a level alone or going through the campaign with an online crowd by your side. Since the game is free for PlayStation 4 members with PlayStation Plus in March, this is a game I would recommend to any PS4 owner, especially those impressed with Resogun.