I will not try to deny it, I do like food and I definitely don’t like to starve. At first glance, Don’t Starve,  seemed like a walk in the park. When I entered the game, I died of starvation on the fifth day. I told myself, “Good job, Shawn. You can’t even follow the title.” This is because Don’t Starve strives to make you survive using your wits in a procedurally generated world. So, will Don’t Starve survive on the market, or will it be starving for players? 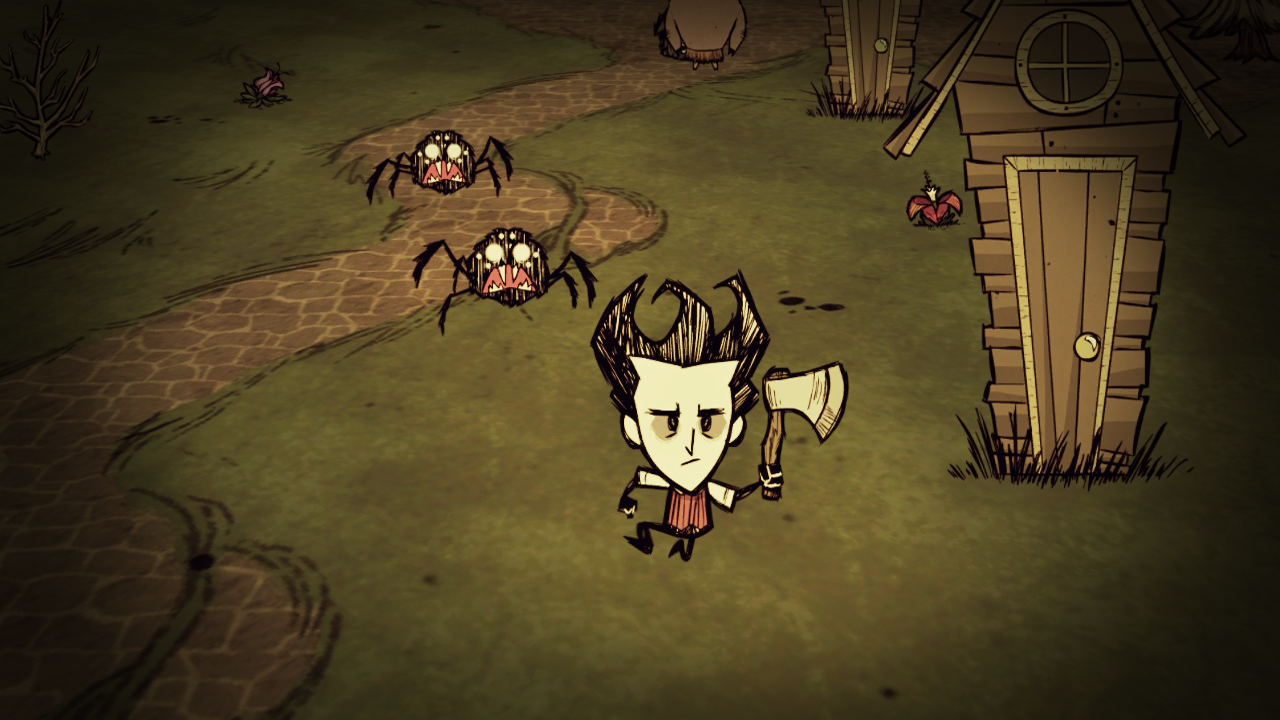 Because Don’t Starve is a survival game in a procedurally generated world with a unique art style, many people are quick to put this in the “Minecraft clone” bin. However, it would be a mistake to dismiss this game like that. Where as Minecraft is bright and colorful and has more of a sandbox feel, Don’t Starve has a setting that is better suited in a survival horror game.

Both games, however, share the same flaw: the story (or lack thereof). In Don’t Starve, you are placed into the world by some sort of mystical person… and that’s it. You see several different creatures, like pig men, buffalo, and giant long-legged birds that will not hesitate to kill you, but interaction with them is limited, mostly because they mostly want to kill you. While there are nine different characters to play as, the story and world they enter are mostly similar. 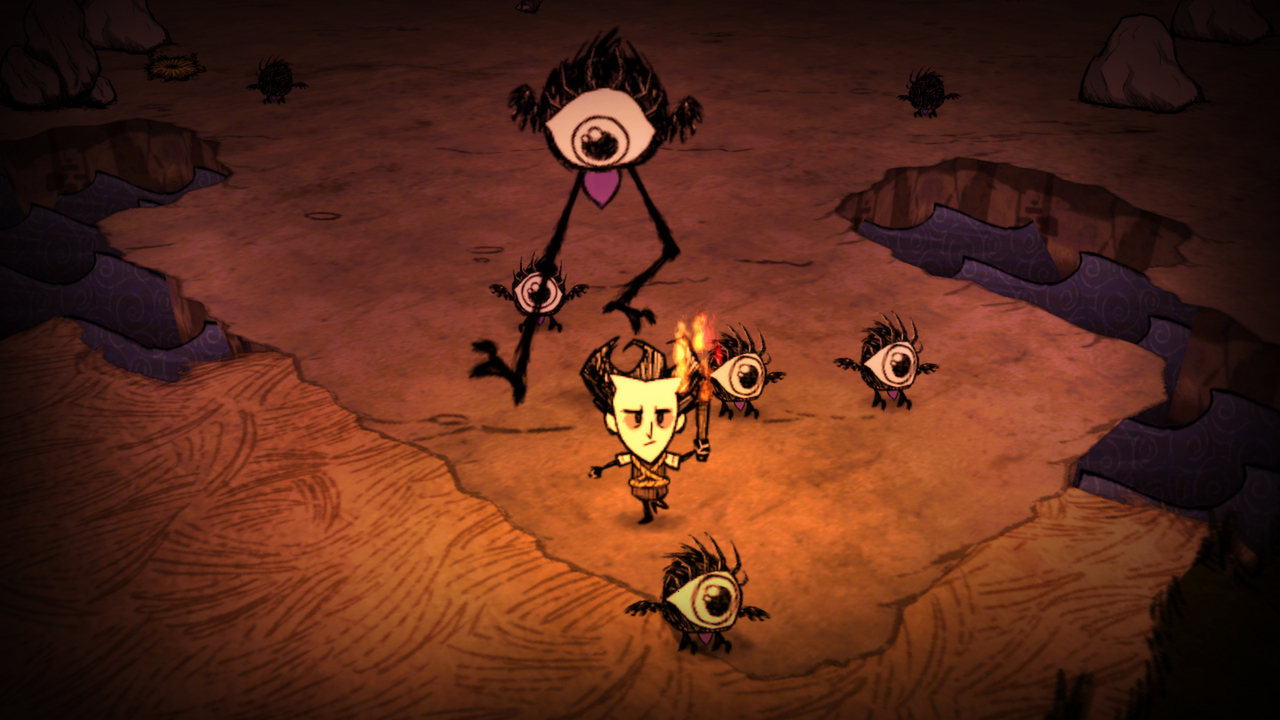 The procedurally generated world, typical of the survival genre, does have a nice touch to it, even though luck may not always be on your side. Will you end up in a nice grassy place by the shore with carrots, berries, rabbits, and access to other areas with more resources, or will you find yourself in a forest with killer bees on one side and deadly fireball-shooting enemies on the other? While the random placement can be frustrating, it did keep me on my toes and kept me updating my strategy as to where I would go and what I would do. 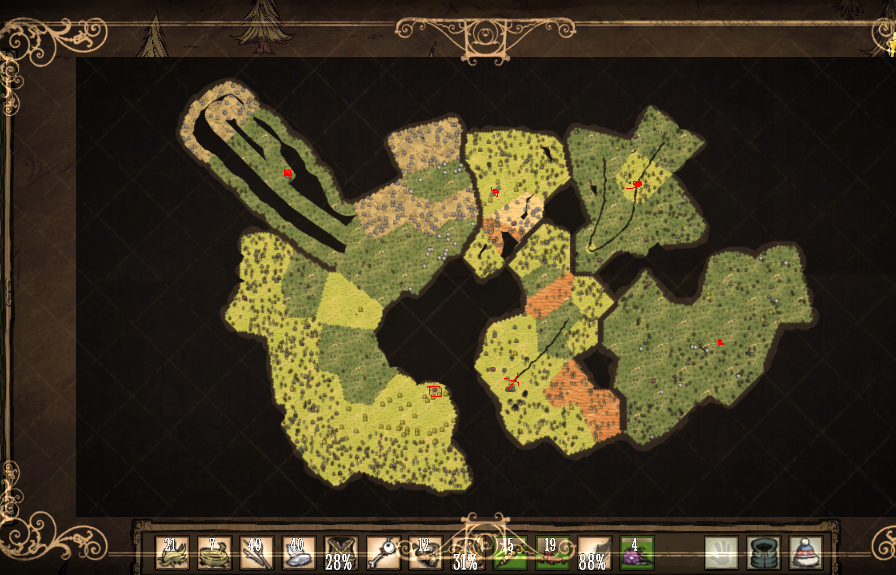 The map is easily accessible and automatically expands when you explore, which is nice. It also shows helpful places (where resources like rocks and grass) are as well the locations of traps and wormholes. Having that in this survival game is essential because the world is large and easy to get lost in.

The elements of the HUD, however, aren’t the best. Although the HUD size is customizable, I found no comfortable size where I could see everything and have it not get in the way of the world. While it is nice to have the inventory and day/night cycle out as well as the hunger, health, and sanity meter, the crafting sidebar seems like it could be hidden, especially since you need to press L2 before using it. Having too much on the screen tends to hinder the look of the world. 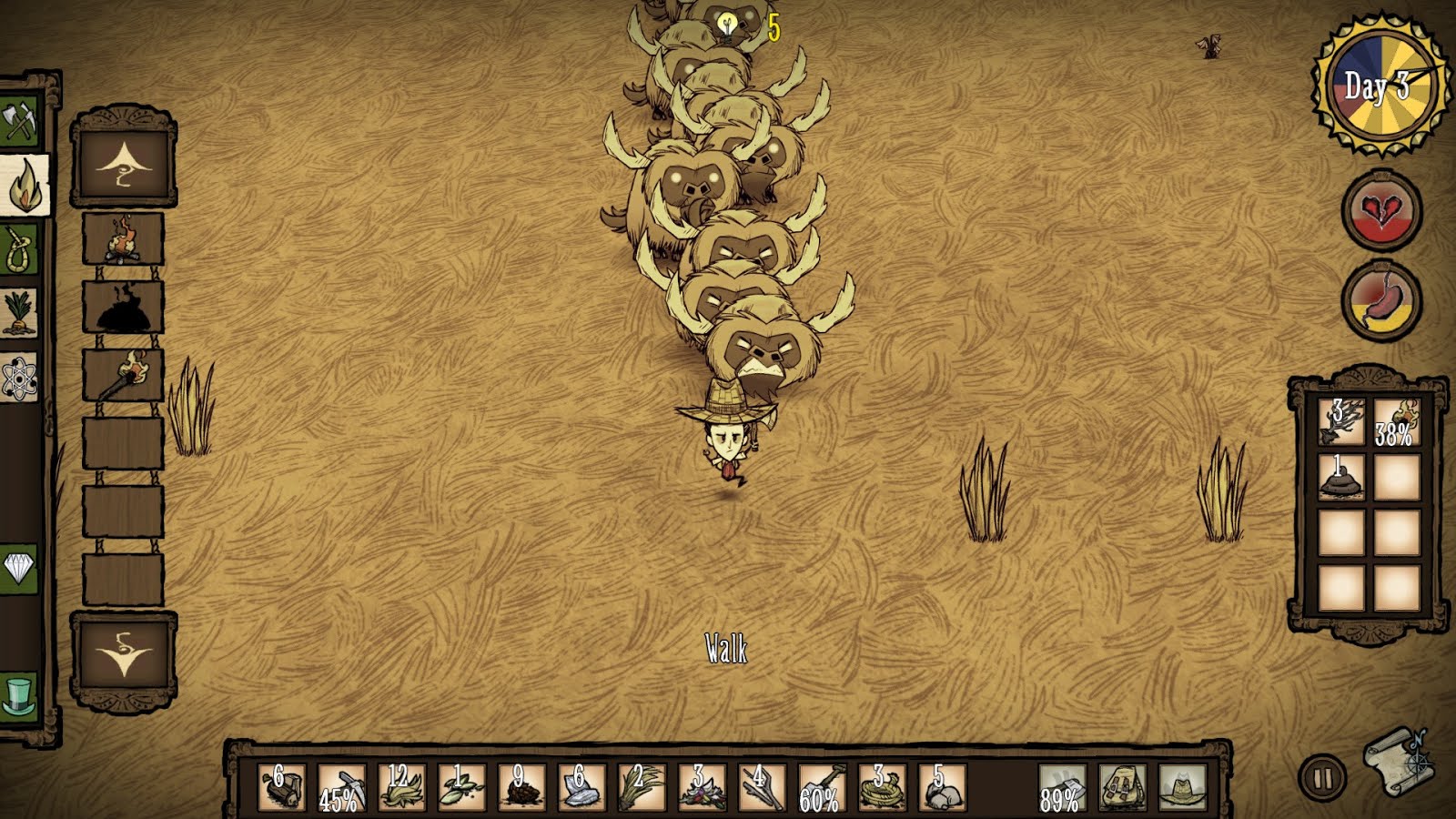 The world, on the other hand, is a blend of wonderfully beautiful and irritatingly dull. The 2D art style in the 3D world is great combined with the isometric view. The art style of the sprites, from the player characters to the crazy enemies, are wonderfully dark and eerie, giving the feel of a horror game. However, the colors are dull and limited. Going from dark brown to lighter brown to greenish brown with very little color variation aside from the few times other colors are introduced, which is rare and still relatively dull. That coupled with similar looking ground styles really don’t elevate the game. 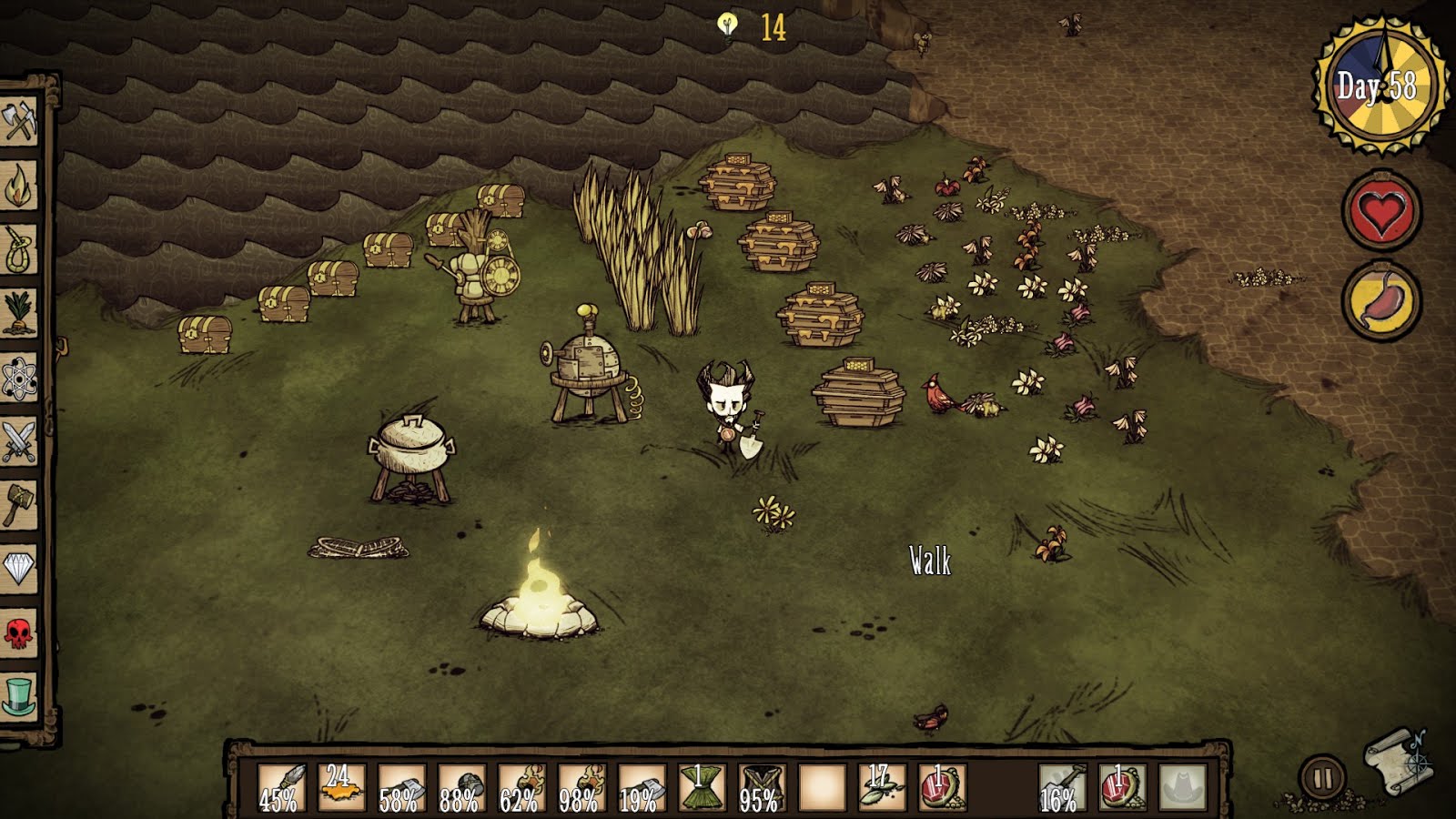 However, the gameplay is solid. Although the art style hinders some of the more creative ideas like Minecraft has, it does have a good crafting system that is fairly deep and requires exploration for progression via science and alchemy machines. There are both good and bad sides to this, seeing that you can’t really build multiple structures with ease and that sleeping in a permanent bed is impossible. Houses are out of the question, although farms, armored gear and weapons are still around, which is nice.

The other gameplay idea involves the day/night cycle. Because your progress is measured in days, the cycle is important and the meter at the top of the HUD is critical, especially in twilight. In Minecraft, you have the sun to guide you, and at night, you can find a way to survive by fighting off the monsters or digging yourself into a hole. In Don’t Starve, the night will literally kill you. Building a fire before midnight is the only way to survive the night and keep different monsters and creepies away. 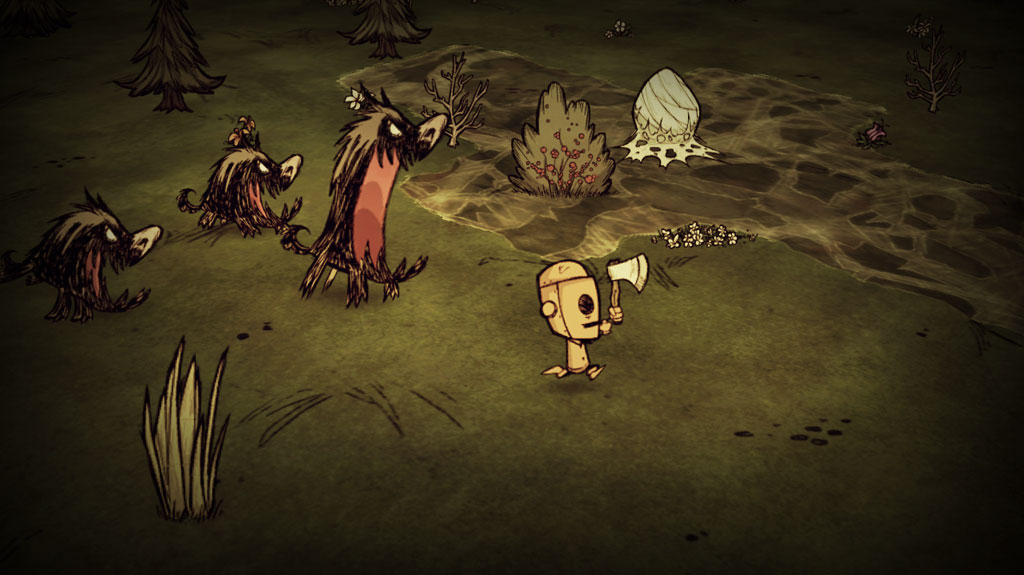 However, without adequate sleep, these creepies can even come out during the day, making sanity critical. Building sanity through sleep, picking flowers, and wearing a wreath is mandatory to keep the scenery around you from waving back and forth and keep the imaginary enemies away for a while. I was killed many times because I went crazy, hallucinated some beast, and it killed me.

The nine different characters, which are unlocked through multiple playthroughs, add variety to the gameplay, but not enough to make me want to try them all. While some of them have a big difference, like the pyromaniac girl with dead eyes and a tendency to burn things when she’s nervous or the girl who can summon the ghost of her sister, others do not, like the man who can grow in size after building muscle and eating a lot. While this may seem like a large difference, I only had the urge to play these characters once to experience them before going back to my default character. 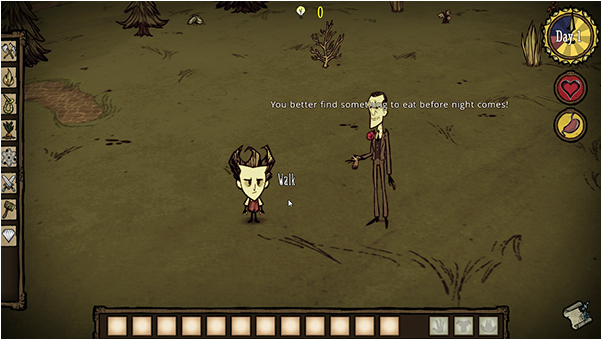 Don’t Starve is basically Minecraft that went through a Tim Burton filter. The art style is magnificent, the gameplay is fluid, and the dark always made me run for my camp, crying like a little girl. The story may be nonexistent, but the atmosphere and world tell so much more. The HUD may get in the way, but it is nice to see when I’m hungry or going insane. The colors may be dull, but it is what I didn’t see that terrified me. With multiple characters to cater to different play styles, it is a great game to pick up for anyone interested in surviving a land and taking on the things that go bump in the night. Now, if you’ll excuse me, I’m going to get some lunch.