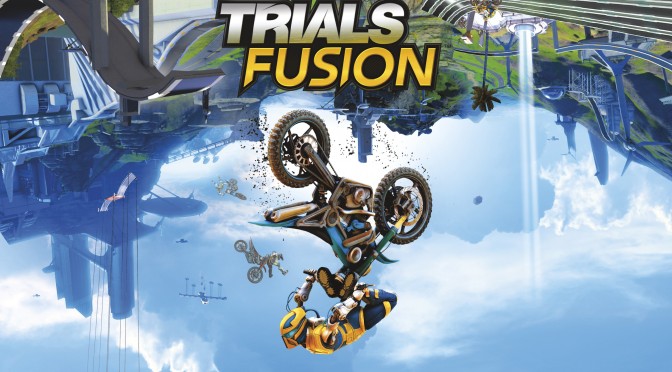 I’ll be honest here, I am not a fan of two wheel motorsports in the real world. It just doesn’t seem as exciting as something like four-wheeled racecar events. Weirdly, I’m the opposite in video games. I love motorcycle games and I’m a bit more “meh” about car games. I don’t have a clue why.

I remember when I got Motorcross Maniacs on the original Gameboy. That game was insane. I loved riding along in a 2D plane and doing jumps and flips. I download every motorcycle game I find on the Apple App Store. I’m just a sucker for this type of game.

So when Trials HDcame out on Xbox 360, I was in. I was awful at it, but I was a fan. I played through it, and I got Trials: Evolution when it was released years later. I played through that one and enjoyed it too. So you can imagine how excited I was to get Trials: Fusion on my Xbox One two weeks ago.

The story of the game is arguably incidental. This is a motorcycle arcade game. Why the character is riding a motorcycle over these obstacles is probably not important. But the fact that they bothered to put in a story at all makes me happy. I just wish that I could have understood it better.

Even though you can play Trials: Fusion without having a clue about the plot, you definitely need visuals to get any enjoyment out of this game. Here the game shines. I have to say this is the best looking Trials game I’ve ever seen. The levels are futuristic, yet highly varied. I don’t remember two levels that appeared overly similar. I found myself riding through swamps, over canyons, and through all kinds of built up areas. It’s a surprisingly expansive selection to choose from.

Like the previous entries in the series, the music in Trials: Fusion is atrociously bad. I hope it is on purpose, because I always have to turn the music off everytime I play a Trials game. At first, It’s part of the charm of the game (like the insane difficulty), but it soon becomes grating to me.

The gameplay is where Trials: Fusion really shines. Pushing the right trigger makes the rider throttle up the bike, and pushing the left rigger makes the rider push the brakes. The left stick controls the weight shifting of the rider, and the right stick controls the FMX trick mechanics. That is pretty much the long and short of it. You can get through the entire game if you can master the balance of factors of rider lean, brakes, and throttle control. Of course, that’s much easier to said than done. It took me many, many tries to get through some of the harder levels. However, it is pretty satisfying to get to the end of a particularly nasty level. 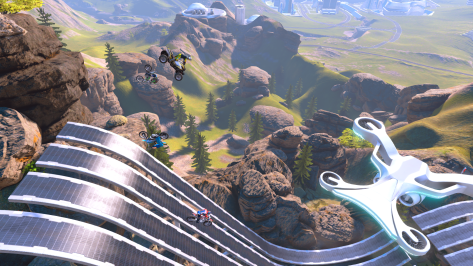 My main criticism with the controls is the floppy feel of the FMX controls. I like that they added the ability to do tricks, but it just feels awful, controlwise. I know that it’s hard to pull off tricks on a motorcycle while it’s flying through the air in real life, but it shouldn’t be harder to do it in a videogame. I had trouble beating all of the FMX challenges because I couldn’t get the controls to bend to my will. It seemed that no matter how hard I practiced I couldn’t improve my skills. This is especially bothersome because the other controls are so tightly honed that it highlights just how bad the FMX controls are.

One of the real draws of this game is the challenge of earning gold medals on the tracks. I felt the lure of 100% completion pulling me back to the main game after I earned the Trials Trophy. This pull is similar to the asynchronous multiplayer included in the game: people on your friends list are in competition to set the best track times. You get notifications that your records are beaten every time someone from your friends list beats your time. It quickly gets out of hand if you get sucked down that rabbit hole. I found myself wasting four or five hours trying to best my friends track times after I got a notice that they were beating my times. This factor really adds replay value to the game.

Another replayability boost is Track Central. This is the online custom track hub for Trials games. In here, you can download over 4,000 custom made tracks. These tracks are conveniently curated by the developers to help you find new and interesting things to run over with your motorcycle. There is also a few games that do not fall into the traditional Trials formula. This are a blast to try out too.

I really enjoyed this game for a variety of reasons. Redlynx crafted a fine experience that caters to my innate desire to ride motorcycles in videogames. Even if I managed to earn gold medals on all the levels, there is still the added challenge of platinum medals heaped on top of that. That ever-increasing difficulty is where I feel the developers struck gold. I know that no matter how good I get at this game, there will always be something harder to attack next. Add in Track Central and multiplayer to push the entertainment value of this game pretty high in my esteem.

I recommend downloading this game if you have even a remote fondness for the series. This is the most fun I’ve had yet on my Xbox One. Best of all, it’s all on two wheels: my favorite digital motorsport.