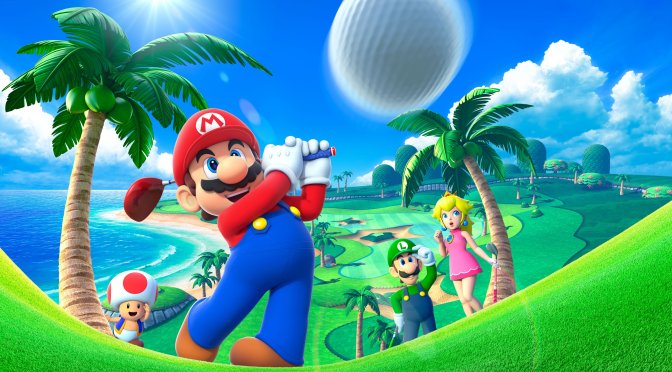 One of my favorite aspects about video games is the ability to experience things you would otherwise be unable to do, like being good at golf. Thankfully, the Mario Golf series has allowed athletically-challenged gamers like me to enjoy the thrill of golf without being exposed to the dangers of sunlight and green grass. Mario Golf World Tour for the Nintendo 3DS is the newest addition to the Mario Golf series. So is it worth your hard-earned coins? 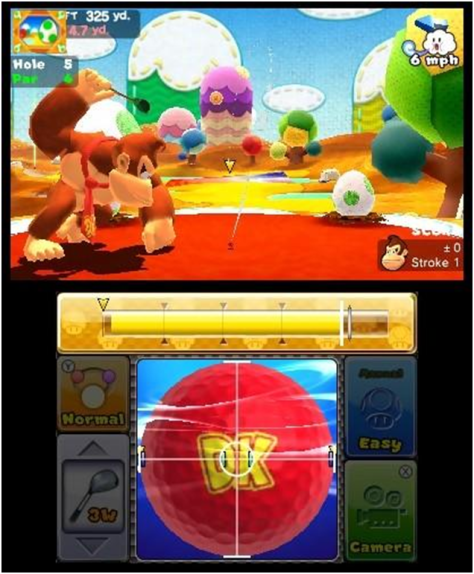 Mario Golf World Tour plays just like previous entries in the series. You press ‘A’ to start the power meter, press ‘A’ again at the power level you want, and then ‘A’ one more time as you try to hit the ‘sweet spot’. There is also the option of adding top spin or back spin to the ball at the end of your hit by double-tapping ‘A’ or ‘B’. It might sound a little confusing on paper, but it makes sense once you understand the mechanics.

Once you understand the controls, it’s really just a matter of getting used to the effects of wind, sloped ground, and other elements as you shoot for low scores. There are loads of tutorials and practice modes to help you hone your shot. And if you’ve played Mario Golf before, you can skip these altogether and hit the greens right away.

Many familiar Mario characters are available to use in the game. Of course, you can expect to see Mario, Luigi, Yoshi, and Bowser. But there are some new faces this time around, including Toad, who has strangely never been a playable character before now. Each character has amusing animations depending on how well you do on a hole. The voices can get rather repetitive and annoying after a while, though.

There is also a lot of focus on Mii characters. Players can join the Castle Club and improve their skills so they can enter tournaments and unlock new courses. This is reminiscent of the single player modes of the Game Boy Color and Game Boy Advance Mario Golf games. While there aren’t any RPG elements this time around, you still have the training modes, challenges, and character conversations from previous games. You can also equip your Mii with the new gear and costumes that you will earn as you play.

In terms of play locations, the game comes with four 18-hole and six 9-hole courses. Many of these are themed courses, such as Yoshi Lake, which has plush fabric textures and giant Yoshi egg obstacles. You will sometimes have the option of using items as well. Use a Bullet Bill to keep the ball right next to the ground as it travels, or use a Boomerang Flower to add some serious English to your shot.

In addition to the built-in courses, there are six downloadable courses, two of which are available now. The first two are remakes of courses from Mario Golf 64, complete with the original music. Each DLC pack comes with two courses and a new character for $5.99. You can also get the Season Pass for $14.99, which comes with all three DLC packs plus the Gold Mario character, who earns a load of coins with every shot.

To keep things exciting, Mario Golf World Tour includes a Challenges mode. Each course has ten challenges to complete. Some of them are easy, such as achieve a score of -2 on a course. Others are near-impossible, like the One-On, One-Putt Challenge, which requires you to get on the green on the first hit and then in the hole on the second for an entire course. Completing challenges will earn you new characters, new courses, and new gear.

The game is a ton of fun and has loads of replay value, but there are a couple of things that were overlooked. In previous games (and in many other golf games, for that matter) you had the option of viewing your best shots. So if you scored a hole-in-one or some other crazy or cool shot, you could show it to your friends. Sadly, this feature is non-existent, which is really unfortunate. There is also no Skins match option. Skins is scored like a standard vs. match, except that if two players tie on a hole, the points carry over to the next hole. This is less important than the lack of replays, but some veteran Mario Golf players may notice its absence. 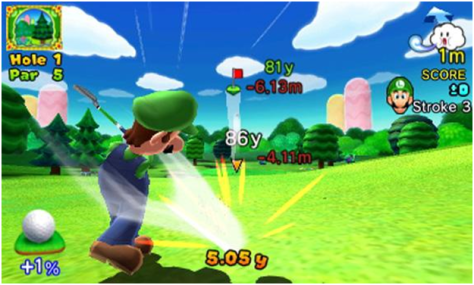 Despite this, Mario Golf World Tour has some great new features. For example, you can play online, which is a first for the Mario Golf series. You can play with friends or you can enter regional or global tournaments. Some tournaments have specific requirements, such as using a certain character or trying to collect the most coins. And If you place in a certain percentile, you will earn a trophy. So don’t feel like you have to actually take first place to earn something. You can also set up your own tournaments to play with friends or random people. There are lots of ways to play, too, such as Speed Golf, Club Slots, with or without coins, and more.

Mario Golf World Tour is an excellent game. There is a ton of replay value with lots of challenge if you want it. While there are a couple of things missing, there are a lot of new features that help make up for that. I’ve found that Mario Golf can be one of those games that almost anyone can enjoy, and this one is no exception. It’s simple enough that newbies could pick it up in a couple of hours, but there is enough difficulty to keep seasoned veterans entertained.