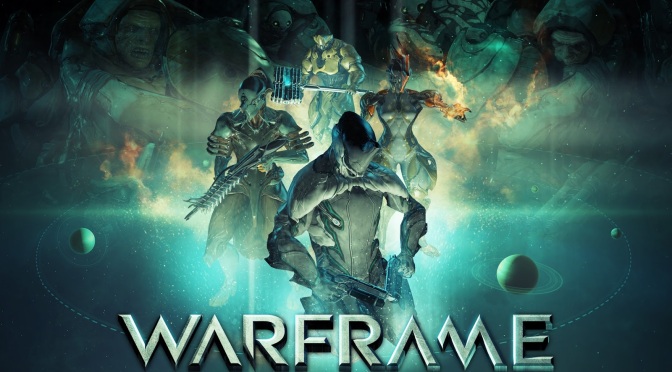 In 2008 the Canadian studio Digital Extremes released a game called Dark Sector, a gritty action game about a special operations soldier who got infected by a new biological weapon that turned his arm into an oversized throwing star. It did okay, but it had strayed away from its original vision of an awesome space ninja in a super-powered suit of armor. Enter Warframe. Digital Extremes took that vision and turned it into the free-to-play mission-based shooter we have today. It originally released for PlayStation 4 last November as a launch game and it has been in beta form on PC since March 2013. Finally Xbox One owners get a chance to see what this game is all about.

I always enter free-to-play games with a small amount of trepidation. How long is it going to be ‘till I get smacked in the face with microtransactions? How prevalent will they be? Thankfully, while Warframe has a ton of items available for purchase, they remain just off to the side. Easy to get to but not distracting or in your face.

In Warframe you play as a member of the ancient Tenno race. The titular Warframe refers to the super powered armor they wear. You are brought out of stasis by agents of the Grineer Empire who are looking to control you and the awesome power of your suit to further their own goals. You are rescued by a mysterious AI called the Lotus, who guides you through missions and tutorials with her sultry, robotic voice.

The game looks nice, especially for a free launch title. I did notice that weird “wet metal” look on a lot of the reflective surfaces. This seems to be something many games suffer from when making the transition from one generation to another. Lighting effects and resolution improve faster than textures and models do, so sometimes we end up with really well-lit, last-gen characters and environments. It’s noticeable but doesn’t affect the gameplay at all.

The best use of the next gen hardware comes in the form of the particle effects. There are some great sparks and lasers and rippling lights. I did notice a drop in the framerate in areas where the chat feature was available or when connecting to servers; but, for the most part, the gameplay was buttery smooth.  Overall it’s pleasant enough, though there are already a lot of games that look better.

Being able to disable or mute the chat entirely would have been a great option. You can jump into the party chat and not have a party which is almost the same thing. Who is taking the time to type out messages?

The story is really just a utilitarian way to string missions and events together. It serves this purpose but is really secondary to everything else. There is an in-depth codex available once you unlock your ship, but the game doesn’t do a great job establishing the universe. I didn’t find a lot of motivation to go digging deep into the lore or the story. Aside from the Lotus none of the characters are really fleshed out. I like when a game grabs me and makes me want to become a master scholar, delving deep into the obscure details of the universe and its inhabitants. I just wasn’t feeling that here.

Once you finally get into the missions Warframe becomes a fairly enjoyable, fast-paced shooter. I feel like it could have used some cover mechanics in some of the tougher missions, but the main focus is fluid combat so I understand why the developers left that out. There are lots of ziplines, ledges and a rudimentary parkour system that make traversal interesting. Shooting enemies feels satisfying, but it is a long time (at least 3-4 missions) until you can afford to buy a new weapon without microtransactions so choose wisely or be prepared for a long slog. You basically just keep doing missions to get upgrades and money to do harder missions and get better upgrades and more money.

Each Warframe you play as has its own set of powers and strengths. There are 3 available for free at the start. I chose to play as Mag, because it reminded me of the Vanguard in Mass Effect and she was the only female character available at the start of the game (I typically prefer to play as a female character when that is an option). This also led me to make the poor decision of choosing a shotgun as my main starting weapon. You have to be really, really close for it to work well and since you have a sword it kind of defeats the purpose. At any rate I plugged along through several missions and the gameplay got better as I got used to the controls. Some of the traversal mechanics don’t seem to work for me 100% of the time but when they do I’m able to pull off some pretty sweet moves. I did have the game freeze on me after completing one of these missions. I was stuck in limbo between the mission accomplished screen and the next loading screen. That was not the first or only glitch I experienced and since each mission is at least 10-15 minutes long this put a pretty huge damper on my enthusiasm for the game. I also lot all the experience, money and loot that I gained on the mission that froze.

Warframe is best enjoyed when you have nothing better to do. It is glitchy, it is stingy with achievements, and there are more fully realized games in the same genre (Destiny and Borderlands for starters). That said, the combat was enjoyable and it is a free game, which is why even though it didn’t score particularly high I would still recommend downloading it. Glitches aside you progress at a slow but steady pace and I never felt that the microtransactions were intrusive or that I had to pay to keep playing. With a bit more stability Warframe could end up being one of the better free-to-play experiences out there today. For now it is just something to pass the time with till bigger and better titles come out.

Mike Bertrand is an Associate Writer for MONG. He spends his spare time being incredibly handsome and yelling at people far more important than he is on Twitter.