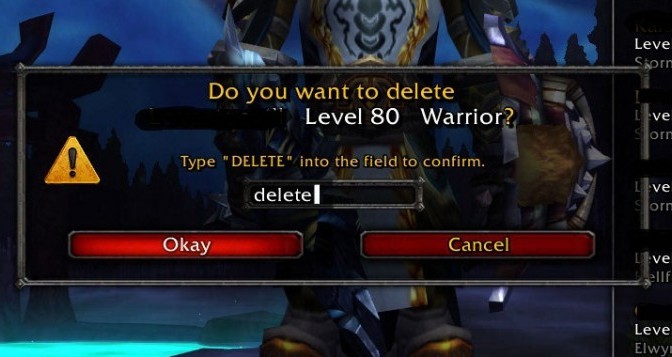 After about ten years of painful videos on YouTube where girls delete their boyfriend’s World of Warcraft characters, Blizzard has announced a solution to retrieve deleted characters.

The new tool being presented by Blizzard is the undelete tool.  Does this mean that you can revive your level 19 Tauren Warrior twink from back in the day?  Unfortunately, the undelete tool will have some limitations, which include:

Also, an interesting piece of information comes with this story.  A GM for the WoW blog commented when asked about being able to undelete characters from years ago.  Their reply was “it may be likely depending on how high the character was before deletion.”

It has been a big year for Blizzard, both good and bad. We will soon see the 10 year anniversary event held one week after the release of Warlords of Draenor on November 13th.  Blizzard also recently announced the cancellation of their project known as “Titan.”  If you are thinking about coming back to World of Warcraft, then November might just be the time.

While this tool seems very useful, I feel that Blizzard may be about 8 years too late in implementing it into their system.  At least we have the new expansion to look forward to.

Landon Luthi is an associate writer for MONG, and is the website’s most cynical nostalgia bastard!  You can follow him on Facebook, Twitter, and occasionally to random Asian bath houses at odd hours of the night.

One thought on “Undelete your characters in World of Warcraft”