Game delays seem to be in the news quite a bit these days.  Luckily, gamers looking forward to The Order: 1886 shouldn’t worry too much about another delay.

The Founder of Ready at Dawn, Andrea Pessino took to Twitter to assure fans that the game will not be delayed “unless there’s a zombie apocalypse.” 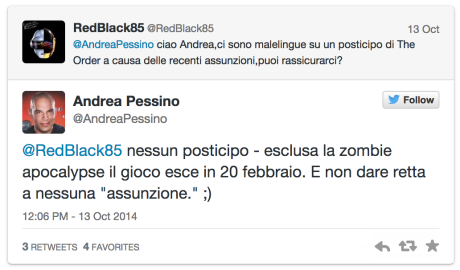 “No Delay – Unless there’s a zombie apocalypse the game will be out on February 20th. And don’t believe any “assumption.”

The third-person action-adventure game is scheduled for release on February 20, 2015 for PlayStation 4.

I don’t think The Order: 1886 will get delayed again, however, this was a pretty bold thing to say.  Ready at Dawn must be down to the final tweaks and testing at this point if they are this confident it will make its release.