Dead or Alive 5 Last Round has had a rather troubled launch so far. The game was supposed to launch February 17th on all platforms, but technical issues saw the PlayStation 3 release pushed back a week (with the Steam release moved to March 30). The past couple weeks have seen a myriad of players complaining of game-breaking bugs in the current-gen and Xbox 360 releases, some resulting in losses of save data for previous versions of the game. It looks like a big mess. While Team Ninja tries to sort all that out, I was able to spend some bug-free time with the far more stable PS3 version of the game. Are the last round of updates to Koei Tecmo’s 3D fighter worth a third look? 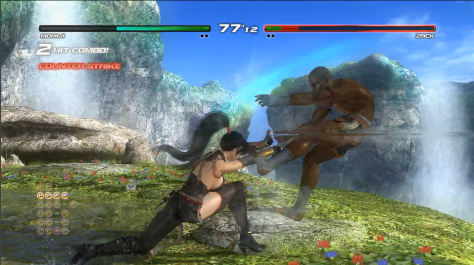 First off, let’s talk about Dead or Alive 5 itself, just in case you missed the original 2012 release or 2013’s Dead or Alive 5 Ultimate. Dead or Alive is a series of 3D fighting games with a focus on accessibility and blazingly fast, brutally powerful action. Separating itself from the highly complex controls of its competition, DoA has only two attack buttons: one for a quick short-range punch, and one for a powerful long-range kick. Stringing these two buttons together in various sequences unleashes a surprising variety of combos, considering the limited vocabulary. Another button allows you to block, and a fourth initiates a grapple or throw. The simplicity of the controls make it a game that can be easily taught and quickly picked up, an area in which most fighting games are severely lacking.

Should you take one step past the surface, things start to get more interesting. Fights in DoA are centered around the “Triangle System,” a rock-paper-scissors set of dependencies between attacks, throws, and holds. If your opponent attempts an attack, even if you’re stunned from a previous attack, you can catch the attack in a “counter hold” — provided you can predict whether the attack is high, middle, or low and input the same direction plus the block button. If your opponent tries to throw you, you can interrupt it with a well-placed strike. And if your opponent gets too greedy and tries to counter before you attack, punish them with a damaging throw. It’s an excellently-designed system that lends a natural elegance to fights that would otherwise be dominated by long, inescapable combo strings. Everything has a counter, and as soon as you become predictable, your opponent can take control of the match. 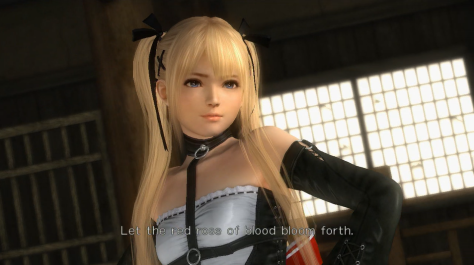 If the Triangle System is the first pillar of DoA, the second pillar is the arena design. The battlegrounds of DoA include a cherry blossom-laden temple, a verdant jungle, a desert warzone, and a city intersection experiencing a fiery, explosive traffic accident – and all of them look gorgeous. Each arena provides differently-shaped spaces to fight in, and a different array of nasty obstacles and explosives just asking for your opponent to be knocked into them. Many arenas have cliffs you can kick your opponent off of, or weak floors and walls that you can knock your opponent through. Take advantage of these and your opponent will take damage from the fall, and you’ll often end up in an entirely different space.

Some of the arenas, such as the ballroom exterior Lorelei, are absolutely huge by fighting-game standards — there’s no way you’ll see the whole thing in just one fight. These elements encourage the use of some new tricks introduced in DoA5: each character has at least one Critical Burst move, which can be added to the end of a combo to completely incapacitate your opponent for just long enough to land a Power Blow. This is a devastating one-use super move that lets you put your opponent anywhere on the arena you want – whether that’s in the corner of the boxing ring, or into the rotors of the helicopter hovering just outside the arena. No 3D fighter I can think of rewards stage control as well as Dead or Alive does. 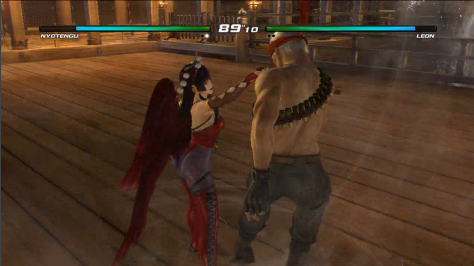 The third pillar of DoA is then, obviously, the character design. The whole series is well-known and much-maligned for the sizeable busts and ridiculous outfits of the female half of its cast. (And it is pretty close to half — 19 of the game’s 34 characters are female.) The first release of DoA5 seemed to take a step back on both fronts, with slightly more varied, toned-down proportions and generally less revealing, more interesting outfits — both changes I welcomed, as it was a sign that the series was beginning to take itself seriously as the technical fighter I knew it could be. Ultimate and Last Round then take steps in the opposite direction, adding a ton of bizarrely impractical outfits and a new character whose massive chest wouldn’t be so distracting if not for her outfits’ not-so-subtle dairy cow motif. That said, the game is still considerably more respectable in that regard than the first four Dead or Alive entries. To be clear, I don’t personally mind this kind of thing – but it’s worth noting for those that do.

While we’re on the subject of characters, the new characters in Last Round are not too exciting. Classic series villain Raidou returns as an undead cyborg, and newcomer schoolgirl Honoka seems to be a weird manifestation of the stereotypical DoA character. Not only are the designs derivative, but their playstyles are too: they use moves literally copied from other fighters, stitched together into bizarre patchwork movesets. It’s frustrating because Ultimate brought with it a bunch of interesting new characters, such as the fire-ninja Momiji, the diminutive yet powerful Marie Rose, and magical winged demon Nyotengu. All these characters brought new (or previously abandoned) styles of play to the DoA table, and are just as memorable as the original cast. These new characters are just boring.

Finally, let’s talk about version differences, because the messaging on that front has been confusing at best. The current-gen versions come with all the new content — two new characters (plus all the DLC characters from Ultimate), a bunch of costumes, two remastered stages from previous DoA games, and new hairstyles for the game’s characters. These versions, as of this writing, also come with a lot of bugs. If you own the PS3 or 360 versions of Dead or Alive 5 Ultimate, you kind of already own the game. An update was pushed to last-gen owners that converts Ultimate into Last Round, but without any of the new content. You’ll get the balance changes and other small things (like new music), but you won’t get any of the new characters or costumes unless you pay for them. All the characters that were paid DLC in Ultimate are still paid DLC in the last-gen versions, but included in the current-gen versions. Further, the two new remastered stages, the new hairstyles, and the graphical improvements are not available at all on last-gen platforms. I’m not sure why some of the omissions were made — the new stages on PS3 would have been a big way to get last-gen players excited about the game again, because the characters aren’t gonna do it on their own.

Scoring Dead or Alive 5 Last Round is a bit odd. It’s the definitive version of a very strong and tremendously entertaining fighter, but it’s also a very minor upgrade. It’s still very much the same game it was in 2012, and thus it’s probably not worth getting too excited about unless you’re a seriously die-hard series fan. That said, if you’ve never played any iteration of Dead or Alive 5, this is a great place to jump in. If you have an Xbox One or PlayStation 4, I’d pick up one of those versions for the new stages and improved visuals (and complete, DLC-free cast) — but be sure to wait for Team Ninja to sort out the bugs first. If you already have Ultimate on PS3 or 360, I’d just buy the DLC characters you’re interested in and continue playing the current version. Again, Last Round is a great game — just not much different than the two previous iterations.