I arrived on the island of Amostra a few short days ago and began my journey as an explorer. Crystals are a hot commodity, y’see, and this isolated land is rich with ‘em! Hunting them down seemed like an easy way to make a living. Then I stepped into the lush, wind-swept plains of Leggi Steppe, and a realization struck me — this place is infested with monsters! Welcome to Final Fantasy Explorers.

The latest in a long subset of Final Fantasy (FF) games, Final Fantasy Explorers for the Nintendo 3DS is a multiplayer-oriented romp through an open world where creatures of all shapes and sizes roam free. As a newbie on the explorer scene, you work your way up from a lowly new recruit by accepting quests, most of which involve slaying specific beasts in a set amount of time.

For those unaware, this particular spin-off was made in the same vein as Capcom’s Monster Hunter series. You’ll operate out of a small hub town, Libertas, where you will manage your weapons and equipment in-between quests. When you’re ready, you can accept a quest from the assignment desk and exit into the open world where you’ll have a designated time in which your given task must be completed.

Other reviews focus on the cooperative multiplayer aspect, and for good reason — but what about the anti-social gamer? I was attracted to this game due to the promise of being able to take control of classic characters from the FF series, like Cloud Strife, Tifa Lockhart, Lightning, and Squall Leonheart (AKA Leon from Kingdom Hearts). It was that sole feature which piqued my interest, not the idea of embarrassing myself online with three other people.

Luckily the game is entirely playable solo, due mostly to some clever gameplay mechanics. In place of human partners, defeating monsters gives you the chance of obtaining their atmaliths (souls, essentially) which you can use to recruit them as constant AI partners. Once assigned to your team, each monster fights alongside you automatically while you also have the option of activating their stronger attacks via the 3DS touchscreen. This adds just a hint of Pokémon flavoring to the game, which spices things up nicely.

Your created character will have plenty of classes to choose from, such as the melee-oriented Monk and magic-spewing Mage. I stuck with the default Knight due to its high defensive stats in the beginning, but soon switched to the more heavy-hitting Dark Knight once I was comfortable with the game’s many mechanics. Considering my specific gameplay needs didn’t fit into any single class, it’s a good thing FF Explorers allows you to use any abilities, both physical and magical, you want — though cross-class powers quickly drain your energy meter.

While we’re talking about game mechanics, it’s worth mentioning just how many tutorials there are to sift through. FF Explorers features a deep combat system with physical abilities, magic abilities, numerous possible mutations for each ability to alter their effects, Crystal Surge abilities, Trance state, and Trance Surges. It’s a lot to wrap your head around (I still haven’t mastered ability mutations, truth be told) but they grant each mechanic to you slowly throughout the first several hours.

The Crystal Surge is simple enough to learn. Once unlocked, using combat abilities on enemies incrementally raises a counter in the top left corner of the screen. As the number grows, more and more randomly-assigned special attacks will be offered for use while holding L+R. These special abilities vary wildly, and some grant simple stat boosts, one-time attacks, or can even make you giant-sized to better stack up against your opponents.

Trances are activated much the same way, though they rely on a green meter placed below the Crystal Surge counter. When the meter fills, tapping the Trance icon on the touchscreen will activate your equipped magicite (more on that later) and either transform you into an iconic FF character with incredible damage output, or allow you to summon the power of defeated eidolons.

Trance Surges essentially combine the above mechanics to lend you ultimate power. Simply activate a Trance and then start a Crystal Surge, preferably making use of your Trance form’s signature move. For example, a Trance Surge activated as Cloud Strife gives you the option of initiating his Omnislash attack, while Squall Leonheart can make use of his Lion Heart ability.

Are you following along okay? Man, I hope so… ‘cause this is about to get more complicated.

Remember the Pokémon influence I mentioned earlier? There’s another aspect to that. Amostra is home to lots of large, formidable creatures called eidolons — many of which will be immediately familiar to hardcore Final Fantasy fans. These bosses were powerful summons in past games, like Ifrit, Shiva, Odin and Fenrir. They can be defeated like any other monsters, or you can whittle down their health meter and capture them in magicite. This lends you their power if you equip them for use in a Trance.

If any of that sounds much too complex for you, fear not! Even someone with my low intelligence stats managed to figure it out. That hardly matters if it isn’t a fun, cohesive combat system… but rest assured, it is. Fans of Monster Hunter will tell you that those clunky combat and unintuitive controls are done purposefully, but that doesn’t make it anymore fun for those of us with a casual interest. That’s where Final Fantasy Explorers excels, because from minute one everything just feels right.

The same can be said for the graphics and art style. Monster Hunter takes a somewhat realistic approach with its characters and beasts (bipedal cats aside), and even Final Fantasy has gone for an odd photorealism-meets-anime aesthetic in recent years. FF Explorers takes us back to simpler times when characters were squished down to munchkin proportions and able to traverse a colorful, cartoonish world. I appreciate that choice greatly as it lends the game a whole lot of charm it may have lacked otherwise.

Green plains with rolling hills look great, as do the rumbling volcanoes and crystalline ice caverns prevalent across the surface of Amostra. More than that, even the plentiful enemy and character models look great with no noticeable blemishes or graphical ugliness. There aren’t many little touches or fine details to wow you but, even so, the presentation gets the job done nicely. Sadly, you won’t be seeing these locales in 3D — the feature wasn’t included.

The heads-up display (HUD) could use some cleaning up though, because there’s some unnecessary clutter. A chat window remains open at all times, which serves no purpose in single player except to inform you of what you already witnessed with your own eyes. Thankfully, all of that excess info can be turned off in the settings, which I only found out around hour ten of my journey. I also recommend recruiting small monsters to your team, because even medium-sized companions like my loyal skeleton will constantly block your view of the action. 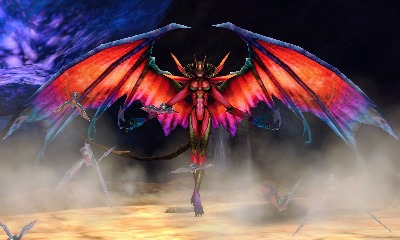 Initially, I held out hope for some semblance of a story to grip to, as that aspect ultimately endeared me to most of my favorite games. Alas, my opening paragraph is pretty much all the game offers — and even then, I added a bit of flair. Quests do have some thrown-together backstory behind them if you care to read through it, but it’s obviously meaningless and had little effort put into it. Still, if you absolutely need to hear anecdotal reasons for gathering five potions or need justification for why ten cactuars need to die, it’s there for your reading pleasure.

The game does have a few downsides, though I would hardly call them game-breaking. The difficulty seems far too easy by default, even without your monster squad. Standard enemies hardly seem to pay any attention to you while running through the wilderness, and in fact most of them only raise an eyebrow once they’ve had a sword inserted through their eyes. After you’ve completed the initial groups of quests, you’ll be given plenty of options to increase difficulty before accepting more. This really just follows the trend of letting the player customize their experience to his or her own needs.

If the ability to transform into established FF characters or dressing like them is the main draw for you, it may be disappointing to hear that this is only possible quite a ways into the game. Squall, his weapons, and attire were made available to me about eight hours in after using abilities 1,000 times, while Cloud is only unlockable by reaching Explorer level 30. Even after their attire is unlocked, gathering the materials necessary to make them is a lengthy process which I’ve yet to accomplish. Sadly, you’ll likely be wearing equipment with better stats before you ever get them, which is a shame. 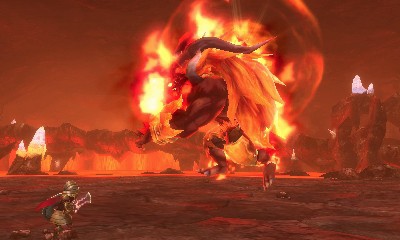 There also isn’t as much depth to the monster encounters as you would find in Monster Hunter, making this experience feel a bit more basic. Monsters or eidolons never flee from battle to regroup in other areas, and I’ve yet to come across one capable of summoning backup from other big-bads. Consequently, every encounter feel predictable and, sadly, makes the repetition noticeable early on.

Dying almost feels like an afterthought as well, because there’s barely any punishment for doing so. You’re immediately presented with three options: use a Phoenix Down to revive if you have one, revive at the cost of three to five minutes off your quest timer, or return to Libertas. It may affect your post-quest results, but the difference is negligible.

If you’re new to this type of game, you’re in for a treat — for a while, at least. It feels vaguely like baby’s first Monster Hunter, which isn’t necessarily a bad thing. Even so, from a single player perspective there isn’t a ton of content here to hold your attention for more than 20 hours or so. Whether or not that’s worth $40 is up to you, but I’ve certainly enjoyed my vacation to Amostra. It’s not like I have an undead knight as a pet in real life, after all…

For more information about what the score means, check out our official review scale

Chris Cobb is an Associate Writer for MONG and wants nothing more than to ride around on the back of a Chocobo, hitting pedestrians with a drive-by firaga spell. When he isn’t daydreaming of taking his loyal undead servants to the local dog park, you can find him on twitter.