LEGO Marvel’s Avengers is the latest iteration of the LEGO videogame franchise, following in the footsteps of LEGO Jurassic Park, LEGO Batman, and other popular licenses. Promotion and buzz on the game promised an immense open-world, gigantic character list, and faithfulness to the Marvel cinematic Universe (MCU). Though the game can suffer from overly-simplistic challenges, LEGO Marvel’s Avengers is a fun, captivating, and exciting gaming experience.

The game begins nearly identical to Avengers: Age of Ultron – the team of heroes charge towards Hydra’s base in order to reclaim a weapon of immense power. You progress towards the base, all the while viewing several frame-by-frame “LEGO-fied” cut-scenes that are very reminiscent to the source material. Following the introductory level, you haphazardly explore thinly woven together storylines of several other Marvel movies. The anticipation of exploring numerous movies in a single game was very enticing, but to have the levels so loosely connected can be very confusing to a player who is not well versed in the MCU. With that said, if one was to take each level as a vignette mirroring the “best moments” of the movies, then it’s an absolute delight. The stand-out levels (in a great way) were the ones that offered an external exposition of the movie’s storyline, then quickly submerged you into the exciting moments of the movie.

Though the story of LEGO Marvel’s Avengers can be inconsistent, the visuals shine through. The cut scenes were beautiful in HD on PlayStation 4 and echo the powerful visual effects that the MCU encapsulates. Environments are unique and distinguishable, colors are bright and vibrant, and each character’s attention to detail is happily apparent.  The audio effects, unfortunately, were simply discordant. Since the game is based on the numerous Marvel movies, the main characters’ dialogue (whether through cutscenes or gameplay) are solely based on lines in the movies. This immediately limits the game to only follow the movies to a tee instead of being able to deviate, even minimally. Even worse, the chopping in and out of movie dialogues pulled from the movies seem unnatural and can really pull you out of several key moments. On the flip side, the music of the game paid wonderful homage to the melodies of the various movies. A small segment of a level offered The Avengers theme as an up-beat jazz rendition, a fantastic detail that showcases the fine attention to detail that this game exudes. 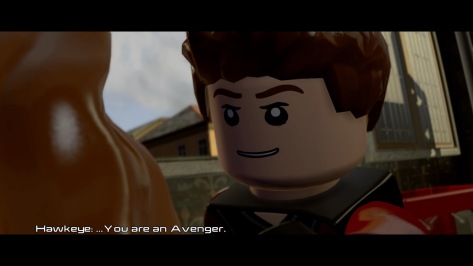 Without a doubt, the gameplay for LEGO Marvel’s Avengers is what keeps the excitement for this game alive. The simplicity of the gameplay offers an enormously wide array of possibilities for the over 200 playable characters. Like other LEGO video games, the fun emerges outside of the storyline. Exploring each crevice of a level, testing the abilities of unlockable characters, or stopping a random crime, are just a few of the many, MANY actions you can partake in. Better yet, the eight hubs from the MCU offer a massive open-world environment that feels well thought out and challenges you to discover all of its secrets. I found myself numerous times saying, “Ok, one more thing” (finding some hidden collectibles or new characters), only to say the same exact phrase ten minutes later, then again ten minutes later… I would say that this was a source of frustration if it wasn’t so darn fun. It is worth noting that the difficulty in finding the collectible items is fairly low, but since there are so many to find, you quickly find yourself going for quantity instead of getting bogged down and spending so much time unlocking a specific environmental challenge.

If you’re in the mood to share the experience, LEGO Marvel’s Avengers offers great local co-op gameplay. Though the ability to cohesively play during story mode is inconsistent, co-op is saved, once again, by the open world aspect. In free-roam, two players can either work together to complete numerous tasks, or decide to never cross paths and work on their own objectives. This offers some dynamic gameplay and can really tailor to what you and your Player 2 want to accomplish.

Despite the issues in storyline continuity and voiceovers, LEGO Marvel’s Avengers offers an exciting and fun gaming experience for any LEGO or Marvel fan. The multitude of collectibles, Easter Eggs, and playable characters will keep you coming back for more over and over again. LEGO Marvel’s Avengers will offer a good and lighthearted gaming experience for all to enjoy.