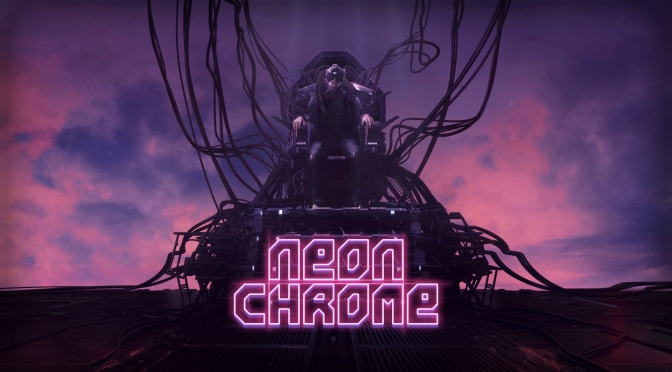 Games in recent years have begun blending their genres in new and interesting ways. Role-Playing games and Science-fiction elements paired with a first-person shooter gave birth to Destiny. Playing a pinball game mixed with the space adventures of Samus Aran created Metroid Prime Pinball. Seemingly odd combinations that ended up being wonderful experiences. However, Neon Chrome combines a top-down shooter with RPG elements, resulting in a monochromatic experience that seems just a few shades off from its potential.

Neon Chrome begins in a dystopian future where your character has the ability to hack into powerful assets. Once you tap into an asset’s consciousness, you’re able to fight your way through the hoards of enemies towards the top of the structure. Your ultimate goal is to confront the Overseer – the being that oppresses civilization in this world. Sadly, this is the gist of the arch. Though the storyline is a full-blown, generic dystopian silhouette, the main focus of Neon Chrome is more of a platform to the gameplay. Regardless, I was disappointed as to how shallow the explanation for fighting in this adventure was.

The visual style, enjoyably, is a wonderful interpretation of this type of world. The combination of various neon colors for your character and weapons, paired with the grim shades of the environment, allows for a perfect combination of the two while not overpowering the other. The short clip before your actual gameplay offers a great voiceover explaining the thin story, while showcasing wonderful static images of the world. Similarly, the loading screen offers more snapshots of the world, allowing you to feel more immersed in the universe and get more context for the adventure.

Once I actually started my venture into the game, I died in less than two minutes. Yup. Less than two minutes after I started, my asset was “disconnected” and I went into the hub. This situation immediately motivated me to delve back into the levels. This time I progressed a bit further, but still died much quicker than I would have liked. After a few more go arounds, completing some levels, and dying a bit more, I quickly noticed that this is a game that does not hold your hand. Players are required to adapt quickly within a randomly generated level, or face imminent doom. Hence, I faced imminent doom often.

With each death, comes knowledge, and a chance to better your future odds. Throughout a level, you’re able to collect coins, which can be used once you die to improve your overall stats – improved health, luck, weapons, etc. You’re able to permanently increase your stats, i turn allowing you to go full force once more into the world with a better foundation for success. Most stats show that they can be upgraded up to 100 times, so the implication of grinding over and over again becomes very apparent. Some players may find this exciting; I, however, became cautious. After playing for hours, I found myself increasing in skill and power, but kept facing walls of destruction – questioning whether or not I enjoyed the game, or just playing out of some unknown reason.

My desire to further my progress was mixed, but was swayed when I realized the method in progressing became very mundane. The generated levels eventually became bland and the enemy variety wasn’t varied enough to capture my attention. It is worth noting that the type of destruction I was able to choose from, as well as the various perks for your character,  allowed for decent variety. However, the main and sub-weapons do not seem to drastically alter any levels significantly, though I hoped the variety would match the perks.

A major gripe that shocked me was the fact that the laser pointer was not pointing from the gun’s barrel. Whether this was intentional or a glitch, I was flabbergasted that my laser pointer was not aligned to my gun. I shot forward, but my bullets ran right. This became a major nuisance and certainly hindered the gameplay and enjoyment for me. The variety of actual destruction seemed very limited as well. Sheer force and firepower were the ultimate ways to push through the levels, and like I mentioned earlier, showcased the repetition and mundane livelihood of Neon Chrome.

Much like the PlayStation 4 version, Neon Chrome offers a decent top-down shooter that fits nicely on Nintendo Switch. However, I am a little surprised that the visual appearance is a bit lower in quality than its earlier versions. The environment is still vibrant and appealing, but characters seem muddled and not as sharp. Regardless, the controls are much tighter, gameplay is more precise, and I’m having much more fun than during my original review. I think Neon Chrome shines on the handheld side of the Switch. The loop of fighting your way through a level, dying, upgrading your skills, then going back at it again, is a perfect 5-10 minute loop that you can cram in on the go and still feel accomplished.

Though the visual offers a nice spin to the top-down shooter, the overall experience does lack some essential elements. The intentional repetition and high-level of difficulty for Neon Chrome is intriguing, but the lack of variety to the levels and obvious grinding can be a deterrent for many. For people who enjoy top-down shooters and want to try something new, this is a perfect fit, especially for the Nintendo Switch. However, to the general player, this can be a mixed experience that could ultimately frustrate you instead of inspire you to hack in and try again.

A review copy has been provided by 10tons Entertainment for this review on PlayStation 4 and Nintendo Switch. For more information about what the score means, check out our official review scale.