Yes, friends, Resident Evil 7: Biohazard was just revealed at Sony’s E3 conference, and the internet has exploded. Whether positive or negative, there’s a buzz in the ether about this drastic new direction of Capcom’s long-lasting Resident Evil (RE) series. Looking to be a soft reboot with a new first-person perspective, as well as a cast of all-new characters, there’s a lot for longtime fans of the series to be worried about. If you’ve been following the series closely over the years, however, this should come as no surprise. This has been a long time coming and, if you’ll allow me, I’ll explain how we got here… and why Resident Evil as we know it is dead.

First, some background. I’ve been a fan of RE since the beginning, way back when my older brother bought the original for his fancy new PlayStation. I was a wee lad, maybe six years old, and was completely entranced by what I saw. 3D graphics, cinematic camera angles, zombies, monsters, and gore! I dared not play it by myself, and only watched my brother and his friends take turns wandering the corridors of the Spencer Mansion. My heart raced at every unexpected jump scare, and I’ll never forget seeing the Tyrant erupt through concrete to initiate the final boss battle.

I wouldn’t know it for several years, but I was hooked. Time went on, and when an incredibly realistic remake of that first game released for my precious Gamecube, I finally delved into the series for myself. What I discovered was far beyond my expectations.

You see, the classic RE games weren’t really about the zombies, monsters, or gore. Those elements were always present, of course, but never the focus. Capcom coined the term “survival horror” when the first game released, because the emphasis was always about surviving the Spencer Mansion itself.

This infamous locale, one of many owned by Umbrella Corporation founder Ozwell E. Spencer, was almost a character unto itself. Beneath its rustic façade was a hidden laboratory where terrible viruses were engineered for one purpose — to mutate living beings into bio-organic weapons for sale to the highest bidder. To conceal these awful secrets, the mansion above this subterranean compound was filled with traps and complex locks to keep out the uninitiated.

Some would say that the earliest RE games were puzzlers disguised as zombie games, and that isn’t inaccurate. As Jill Valentine or Chris Redfield (playable protagonists of RE1) roamed the Spencer Mansion, they found themselves constantly tasked with searching for seemingly innocuous objects with hidden uses. A set of masks may serve as keys for an unorthodox lock, while lifesize suits of armor need to be arranged in a particular order before toxic gas fills the room. Even if you happened to find one of these items, finding its rightful home inside a house of horrors often required extensive exploration. In all of these games, the undead mutants served only as a gauntlet for gamers to endure while deciphering clues.

Just about every component of that first game was designed to make players think. While you could locate maps to help you get around, memorizing the labyrinthine layout of the mansion was necessary for fast and efficient travel. Knowing when to press forward, or when to retreat back to a save room to free up inventory space, was just another way RE1 tested players.

Even the plot had to be discovered by dedicated gamers, mostly contained within files and journal entries hidden throughout the mansion. There was a bare-bones storyline presented through cutscenes here and there, but the true horrors that befell the Spencer Mansion could only be discovered by actively searching for the truth. Upon finding these documents, it was up to the individual player to connect the dots and form a timeline of the events leading up to their current predicament. 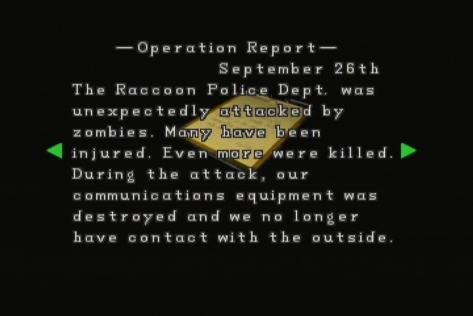 This trend continued for years in such titles as Resident Evil 2, Resident Evil 3, Resident Evil: Code Veronica X, and Resident Evil Zero. Even the occasional spin-off, like Resident Evil: Outbreak, maintained those core components, albeit in a different way. The formula worked quite well, but Capcom became increasingly dissatisfied by waning sales figures.

As such, Capcom looked to the highly successful film adaptations for inspiration. To this day, those movies are little more than summer popcorn flicks with more fluff than actual substance, relying on over-the-top action and cheesy one-liners.

Taking note of how well the film series was received by a broader audience, Capcom scrapped the more psychological horror-based version of Resident Evil 4 already in development… and forever altered the direction of the series. 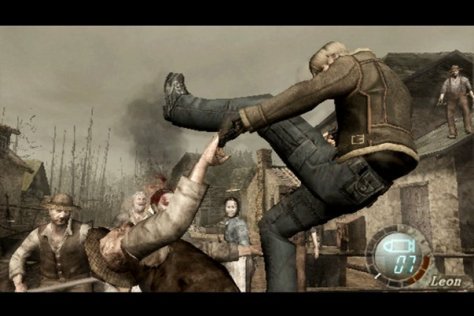 Although the opening area of RE4 boasted a creepy atmosphere, it quickly became clear just how different it was from previous RE games. An intense encounter with a chainsaw-wielding maniac set a more frantic tone, and introduced us to los Ganados, the primary enemies. Ditching the traditional zombies once and for all, RE4 featured fairly normal-looking foes capable of speech. Although large mobs initially presented some intensity, it’s difficult to be frightened by knock-off zombies who curse at you in Spanish.

By the time recurring protagonist Leon S. Kennedy met a dictator with a Napoleon complex, battled a cave troll from The Lord of The Rings, fled from the path of a giant robotic statue, and landed on an island filled with gun-toting enemies ripped straight from Rambo movies… it became clear that Michael Bay also served as inspiration to the development team. 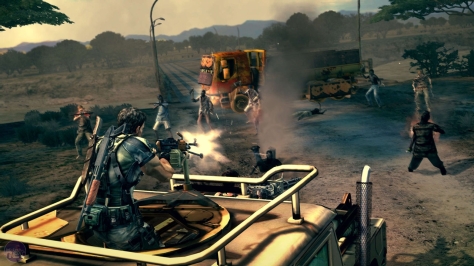 Resident Evil 5, which I lovingly refer to as “Chris Redfield’s African Adventure,” only ramped up the action from there. Adding co-op, multiple on-rails shooter segments, a chapter set on a battleship, and a final showdown inside the belly of a volcano(!!!), it all but abandoned both survival and horror. Even so, fans like myself enjoyed the story, which served to end the original plot that began way back in the original game, reuniting Chris Redfield, Jill Valentine, and Albert Wesker one last time. Its first story-oriented downloadable content also returned to the series roots, taking place in a mansion, with static camera angles also featured as an unlockable easter egg.

The less said about Resident Evil 6, the better. From minute one, it touted an explosive adventure with an utterly nonsensical, non-linear storyline set across multiple campaigns with alternating characters. It was a mess of poorly-implemented, over-the-top action set pieces with groan-inducing moments, such as the multiple boss battles with a man who mutates from a T-Rex to a Minotaur. I wish that was a joke! Hell, it was a joke — one that Capcom played on everybody who loved the previous games.

Which brings us to Resident Evil 7. In the months leading up to RE7, Capcom touted a grand return to the roots of survival horror. Yet, as I played through the demo exclusively available to PlayStation Plus members, my heart sank. It was definitely meant to be a horror game, that much was clear, but something was missing…

…like the survival aspect. The playable teaser, titled Resident Evil 7: The Beginning Hour, is a simplistic haunted house walking simulator without substance. It aims to capture the hype and buzz that once surrounded P.T. by mimicking it, and in doing so, Capcom completely missed the point. P.T., a teaser for the cancelled Silent Hills project, was special because of the minds behind it: Hideo Kojima and Guillermo Del Toro, two ingeniously creative individuals. Trying to copy their work was never going to end well.

As such, The Beginning Hour fails in nearly every regard. It relies on heavy footsteps, sporadically placed mannequins, and stereotypical hillbillies for scares… none of which work. Though it clearly contains secrets in the way of locked drawers and strange items, it lacks any significant reason to uncover them. Worst of all, if internet outrage is anything to go by, it has alienated both sides of the divided RE fanbase: those who enjoyed the classics, and gamers who preferred RE4’s spectacle.

While Capcom continues to prove they have no idea what to do with this series, one sad truth has arisen: Resident Evil is now a stumbling husk of its former self, bashing its big, stupid head into a wall because it doesn’t know any better. At least for the time being, while Capcom fumbles in an attempt to chase another audience. Hyperbole aside, there may be a scant few glimmers of hope to cling to… but I’ll save that for another day.

Until then, feel free to express your own opinions in the comments below! I’m eager to hear them.

Chris Cobb is an Associate Writer at MONG as well as a looney conspiracy theorist. He shouts incessantly about the existence of a real-world Umbrella Corporation and their wack-a-doo monster factories, claiming smartphones are used to turn people into zombies. Ask him about it on Twitter, or check out his YouTube channel.

3 thoughts on “Resident Evil is Dead”