You smell that? That’s the smell of Games with Gold. 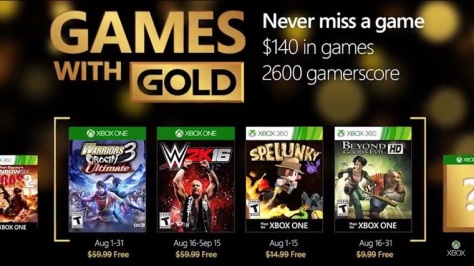 It’s that time of month again folks — the time where Microsoft unveils its Games with Gold offering, and the internet also gets to try out its new pitchforks.

That being said here’s the full lineup for the month of August:

Note: Per usual, both of the Xbox 360 games are playable on Xbox One with backwards compatibility

In terms of Xbox One games being offered, Warriors Orochi 3 Ultimate breaks my rule of “never play games with Ultimate in the title,” while WWE 2K16 doesn’t tickle my toes because I don’t watch the WWE. No Goldust, no WWE. In regards to the Xbox 360 games on offer: Beyond Good and Evil HD is tempting, Spelunky on the other hand: no.

One thought on “Xbox Games with Gold for August announced”