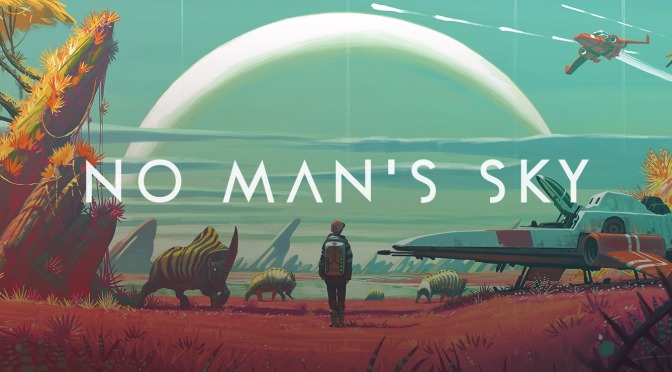 Through countless hours of research, large amounts of 2am caffeine pill dosages, and unfathomable sacrifice, MONG scientist Tyler Fischer has come up with the definitive, scientific, inarguable list of the three most frustrating things about No Man’s Sky.

No Man’s Sky released this past Tuesday to perhaps the greatest hype of this generation, bar a few games like Fallout 4. It has been easily the most divisive this game this year, and Sean Murray has indisputably been August’s most frequent target of angry 15 year old abuse on Twitter. However, whether or not No Man’s Sky is a good or bad game is neither here nor there in regards to the point of this article. No, the point of this article — or you may call it a rant — is to point out the 3 most agonizingly frustrating things about Sean Murray and Co.’s vast space exploration game.

Before we begin I would like to bring attention to one thing that didn’t make the cut but is also mind-bogglingly irritating: Sean, for the love of sweet baby Dwayne Johnson, why can’t I NAME MY DAMN SHIP?! Okay, to the list.

There is not enough time in the day, or advil in the world, for me to tell you how much I hate the inventory management in this game. It’s downright horrendous, and truly makes me ask myself what did I do to Sean Murray in a past life for him to hate me this much. The stacking system within the inventory management is especially egregious and vexing. Only being able to stack 500 of each element on your ship, and 250 on your person only results in one thing: me wanting to pick up elements less. Why? Because after 10 minutes of exploration and resource gathering the last thing I want to do is fly off the planet, get discombobulated while leaving the atmosphere, and then pulse-drive all the way to the space station and back (which is also flat out boring after the 3rd time). It’s an absolutely perplexing and frustrating process —  and one that is nothing more than bad design. To top it off, not everything even stacks. More items should be stackable, if not all items. At least let me stack rare items….WHY CAN’T I STACK RARE ITEMS?

Oh, but that’s not all. We could also talk about the questionable decision to have upgrades take up an inventory slot. Or how for some reason Hello Game’s decided to troll everyone by not letting us stack Atlas Stones.  But for the sake of you, the reader — and for my sanity — that’s enough about the inventory management in No Man’s Sky. 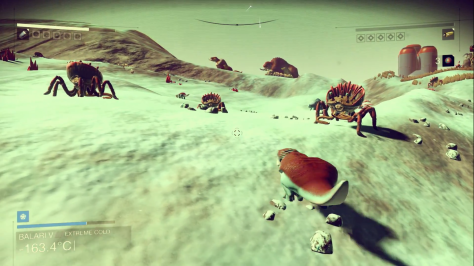 Imagine if moving in No Man’s Sky was fun? Or using the jetpack was more fulfilling? Imagine if you could sprint longer than a 3 year old on a 105 degree day? Well I do, all the time when I’m playing No Man’s Sky. This doesn’t even include ship handling — no, that’s a whole other monster on its own. No, I’m talking strictly the movement of your character.

Where exploration is the name of the game, shouldn’t the act of exploring be I don’t know…fun? Isn’t it a bad sign (in an exploration game) when I don’t want to wander far away from my ship, because I know the trek back will be dreadfully boring? Shouldn’t the sprint option be faster than the combination of melee then jetpack? These are all valid questions that frustrate me every time I land on a new planet and begin to traverse its landscape. Being outrun by a pack of angry crab spiders is not only incredibly depressing, it makes never want to come out of my ship.

Trekking to a mountain in the far distance feels more like a chore than a journey, and that’s because of the poor options of mobility for you character. Every aspect about No Man’s Sky exploration is spot on — but if exploring isn’t fun it becomes mundane pretty quickly.

I’ll be honest: I wasn’t expecting much in the space combat department before No Man’s Sky released, just something simple, undemanding, and faintly fun. What I got was Ace Combat on meth.

For starters, ship handling turns the feeling of flying a spaceship into that of controlling a garbage truck on fire. It should feel responsive, smooth, and completely reliant on skill. However, it feels clunky, oddly heavy, and sometimes downright confounding. As you may guess, this doesn’t bode well for space combat. Turning your ship smoothly is sometimes a headache in itself, let alone when surrounded by space pirates. Because ships lack acute, responsive controls, maneuvering sharply around multiple enemies in a dogfight is near impossible. And if a ship flies past you — good luck — because something as simple as turning around your ship and reacquiring your enemy is a handful. You top this with the fact that shields drop too quickly/the annoyance of trying to replenish them mid dogfight, and you have an incredibly obtuse, empty of fun, space combat experience (one that makes you almost want to be back on foot again).

Oh, not to mention hit registry feels like throwing spit balls at cardboard.

I could also have mentioned: the lack of any navigational tools, it’s kindergarten combat, the lack of actual variety in planets, the countless crashes, the egregious pop ins, and the poor sense of progression. But these were the three things I found above all as the most frustrating, and that were also, single handedly, responsible for the angered-induced genocide of the Bichimi species on planet Inga.