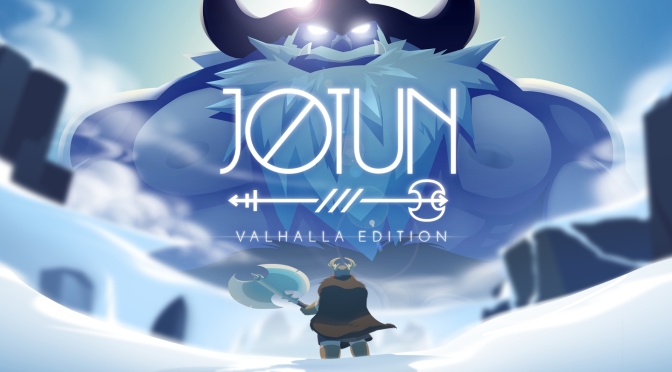 Thunder Lotus Games has announced a release date for viking action game Jotun: Valhalla Edition on PlayStation 4, Xbox One, and Wii U.

It’s been roughly two years since Jotun launched a successful Kickstarter, and nearly a year since it released to a 79 on Metacritic. An impressive entry from a former mobile games developer.

Now, the viking themed game is making its way to the PS4 and Xbox One on September 9th (September 8th for the Wii U) as the Jotun: Valhalla Edition, which adds the Valhalla Mode, “a replayable boss rush mode with even fiercer versions of the already-challenging jotun.”

Here’s an official overview courtesy of the game’s Kickstarter:

“In Jotun, you play Thora, a Norse warrior who has died an inglorious death and must face the challenges of Viking purgatory to prove herself to the Gods and enter Valhalla.

Jotun‘s core loop revolves around collecting Runes to summon and fight the jotun, gigantic Norse elementals. The game focuses on the balance between atmospheric exploration and ferocious combat. Imagine the mysterious romantic mood of Journey mixed with the scale of the boss fights in Shadow of the Colossus in top-down 2D.

The world is randomly-generated and filled with different areas to explore and environmental puzzles to solve. Traveling to the far reaches of Purgatory is key to finding Runes, Shrines to the Gods and many more Viking mysteries.

The combat in Jotun is fast-paced and brutally hard. Using only your massive two-handed axe, you take on foes that are hundreds of times your size. Every hit from a jotun’s attack will take out a huge chunk of your health.”

Jotun: Valhalla Edition will arrive September 9th on PS4. A price point was not revealed.

3 thoughts on “Jotun: Valhalla Edition gets PS4, Xbox One, and Wii U release date”