The PS4 Slim has been leaked and confirmed by numerous outlets such as Eurogamer and Digitalfoundry. Here is everything you need to know: release date, specs, price, and a video of it running.

Take it with a grain of salt if you like, but beyond official confirmation, this is certainly the PS4 Slim.

The latest Sony hardware model is much slimmer than the original, already slim, PS4, and boasts a few internal and aesthetic changes. Further it will be available to buy in September.

WSJ reports that Sony is now cutting production of the original PS4 model ahead of the launch of PS4 Slim on September 14th. The new model is expected to be revealed at the PlayStation Meeting in New York on September 7th, where Sony will also showcase PS4 NEO, an upgraded PS4 model sporting 4K resolution.

The following pictures have been leaked online ahead of the official announcement. 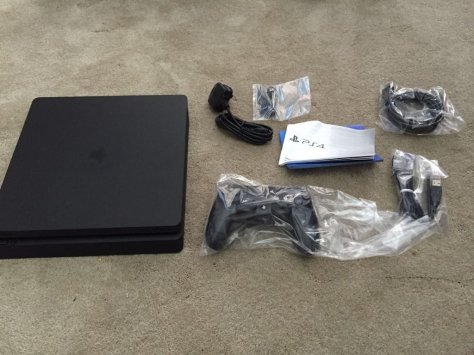 A video of the PS4 Slim running has been put up in face of people saying the leak was fake.

The PS4 Slim (model number CUH-2016A) comes packed with 500GB of storage. According to one person who already has the console in their possession, it also sports a hard-drive bay down the right-hand side so storage is upgradeable.

Other changes noted include:

It also contains/lacks the following:

A price has not surfaced.

One thought on “Unofficial PS4 Slim: Everything you need to know”