Episode two of Batman: The Telltale Series has released, finally continuing this all-new take on DC Comics’ immensely popular character. The first episode was good, but does the follow-up fare better?

Well. That escalated quickly. Episode two: Children of Arkham wastes no time establishing new, interesting backstories for prominent figures from Batman’s mythos. Loyal Butler Alfred Pennyworth enjoys a more prominent role here as the keeper of the Wayne family’s darkest secrets, though that is just the tip of the iceberg.

I won’t be mentioning gameplay much here, as it remains unchanged from episode one — positives and negatives alike. Instead, I’ll be focusing on the building plot and complex characters. No spoilers, though! Wouldn’t want to rob anyone of these twists and turns. 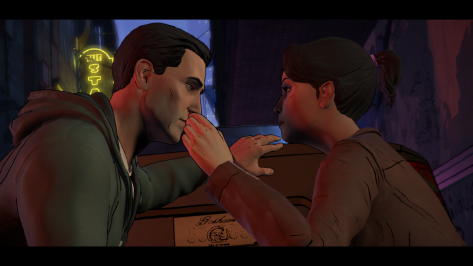 And what a rollercoaster of emotions it is! The scenarios revolving around Selina Kyle, Harvey Dent, Bruce Wayne, and James Gordon have become even more compelling with rising stakes. As Gotham City finds itself on the verge of an intense mayoral election and possible revolution, the choices you are forced to make only become more difficult. Bat-fans are familiar with the idea that Batman inadvertently creates many of his greatest villains, and it seems episode two forces us to experience that for ourselves — whether we like it or not. My actions may have saved one ally’s soul at the cost of another’s, and hopefully Telltale’s story is complex enough to see this through.

However, the script is only one aspect and is constantly elevated by some great voice acting. Laura Bailey’s Selina is every bit as sly and sultry as you’d expect, but also carries great sincerity in certain moments. Troy Baker’s Bruce Wayne somehow seemed “off” during episode one, but I’ve since warmed up to him, and the emotion he puts into Bruce’s softer dialogue is appropriately gut-wrenching. Travis Willingham also puts in a fantastic performance as Harvey Dent, while Enn Reitel’s Alfred is what you’d expect from the character. My one complaint is with Jim Gordon, voiced by Murphy Guyer, whose gruff tones seem more cartoonish than those around him. 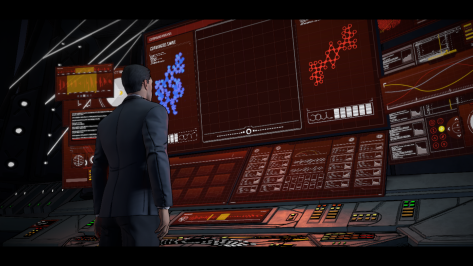 If there’s one downside someone may find with this episode, it’s that Bruce Wayne again takes the spotlight from the Batman persona. There is a chance later on to choose whether to tackle an interrogation as the Dark Knight or billionaire playboy, so hopefully that continues going forward. In my opinion, the focus on his civilian life makes perfect sense at this stage, and it seems to be gearing up for tons of vigilantism in the second half of this series. Only time will tell.

Alas, hiccups and glitches persist during this experience. The lip syncing ceased entirely during a bar room conversation, so characters’ lips remained awkwardly sealed while dialogue was delivered. Highly-populated indoor scenes and larger outdoor moments experience framerate drops and janky animations, entirely breaking immersion. Failed quick-time events during action scenes (and the only gameplay during such fights) again seemed to make no difference, unless I’m mistaken and somehow corrected myself at the last possible fraction of a second.

There was also one bizarre security camera scene (shown above) where several character models seemed ripped from an original PlayStation game, with blocky heads, pixelated expressions, and skin clipping through their hair. I assumed it was meant to reveal the footage as fake, but no one picked up on it, and it was a big turning point for the plot as well. Odd.

Worst of all, I’m unsure if my choices from the first episode carried over completely, as the campaign slogan I chose for Harvey Dent was seemingly replaced by another. I won’t mark this as a negative just yet, as it could very well be tied to the plot… but I’ll be more attentive in future episodes.

This was a solid entry and slightly better than the last, though there are still problems. Heart-breaking choices, intense conversations, great voice acting, and well-done storytelling are carrying what is otherwise an imperfect, fairly shallow video game experience. If Telltale isn’t looking to expand upon the gameplay it is known for, is a stable engine too much to ask for?

For more information about our review scale and what it means, click here.