TWO PARTS OF THE SAME WORLD

Semispheres is a calming, yet challenging puzzle game through which players manipulate two characters within parallel environments. The simple and abstract design of the game allows for thought provoking endeavors with a satisfying sense of accomplishment.

Once thrown immediately into the game mechanics, I found myself intrigued by the minimalist approach on the screen. I was able to control two jellyfish-like characters that floated easily and hypnotically across the screen. One character was controlled by one half of the controller, the other character controlled by the other side. This mechanic was very reminiscent of Starbreeze Studio’s Brothers: A Tale of Two Sons with its dual control of the two protagonists. Unlike Brothers, Semispheres does not make any attempt to craft a world where the puzzles live in. Instead, the four-person team at Vivid Helix doubled down to focus on the game’s appearance and each level’s puzzle mechanics.

The opposing colors of the creatures, blue and orange, contrasted strongly with the intention of the two working together within the levels – a very nice and subtle touch that I adored. The audio also seemed very subdued and tranquil, neither offering major crescendos or awkward silence, but more importantly, the perfect balance to heighten the experience. Even with a loosely related story haphazardly connected with the gameplay, I found Semispheres’ sheer mechanics simply overshadowing this deficiency.

With each puzzle, I was expected to merge the two identical environments together through moving the characters towards an ominous vortex. Once done, the worlds merged and I continued onto the next challenge.

The levels naturally offered various obstacles that opposed my success. Various sentries that could reset your progress within a level, teleporting triggers to move you to a different area of the map, and required simultaneous movements, forced me to adapt my strategies towards completion. Every time I felt comfortable with a game element, Semispheres quickly added another. Whether it was swapping the character to the opposite environment or distracting one of the sentries to circumvent them, each felt warranted towards the increasing difficulty within the game. 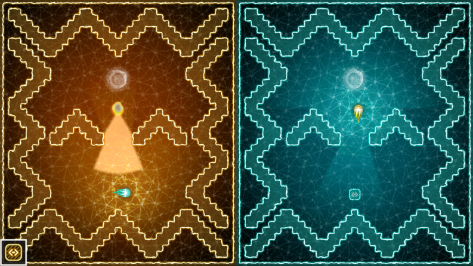 Ultimately, Semispheres is an experience that with adequate challenge and ambient tone. I never felt overly frustrated or incredibly bored by the puzzles and the diversity within the levels allowed for the mechanics to stay fresh and rewarding. Though Semispheres won’t resonate with everyone, puzzle go-ers can have a fun time discovering the solutions of this well-rounded venture.