OFFBEAT & OUT OF TUNE

AereA is a Diablo-like action-RPG game by Sodesco and Triangle Studios where players explore the musical world of Aezir. Though there are minor touches of creativity, unfortunately AereA is a poorly painted imitation of similar games in the genre.

Players in AereA interact throughout the world as a student of the Great Maestro Guido within the world of Aezir. This world is centered around music, so players must choose characters based on their instrumental preference – harp, cello, lute, or trumpet – which coincides with typical classes in RPGs – archer, knight, mage, gunner, respectively. While growing your skills and abilities, players explore the typical trope locations (desert, snow mountain, ancient ruins, etc) to find the nine primordial instruments and restore balance in the world. Sadly, AereA follows a color-by-numbers storyline from most RPGs with a poorly crafted villain, disappointing twists, and frustrating writing.

The issues with AereA are compounded further by the presentation. Though I can appreciate the attempt to make the game look hand drawn, AereA instead looks and plays like a proper last-gen game. I also found myself trapped between a door and a wall on numerous occasions, forcing me to reset and lose almost a half hour of progress each time – a frustrating event in 2017. The score, essentially the central story point of AereA, is incredibly bland and uninspired. Music is repeated over and over again with minimal variety and resembles MIDI themes from years ago. I kept hoping that the music would improve, especially since Aezir is based on music, but after each passing hour, my hopes were unanswered.

However, even with the unsurprising story and bleak presentation, I am wonderfully impressed by the character design of the bosses. Following the theme of music for the game, each boss is inspired by mixing an instrument and animal. One character design that I especially loved was a cobra that was created with pieces from a piano. Another was a mammoth crafted with various percussion pieces and sounded like a beating drum when it moved. These various attention to details with the bosses are wonderful moments that I wish would occur more often in AereA.

But the bosses couldn’t save the overall gameplay of AereA. The exploration of Aezir boils down into a myriad of fetch-quests. “Find X amount of beatles”, “Explore the lava level to find Y character”, “Defeat Z monster” were the extent of the tasks presented. Levels were inherently repeated to maximize their use, but became repetitive and offered no variety for the player. Once you solve a minor “puzzle”, you immediately know how to solve it the next time you venture into the level.

Fighting the same monsters over and over again due to quick respawning could be nice for some players to grind, but just became a source of frustration. Due to this rapid spawning, taking time to grind your character didn’t become necessary. Through normal gameplay, I found my character WAY overpowered and eventually could knock out most of the bosses in one standard attack – another reason why I quickly lost interest with AereA. I did, however, decide to beef up my character with stronger abilities, but since she was so overpowered early on, there was no need for them. 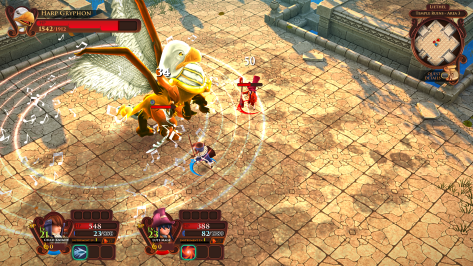 Though I played the majority of this game solo, there is a nice ability to play it as a local co-op game. While playing with a friend, we were both able to battle enemies and explore the levels together. Since we couldn’t separate too far from each other, we had to decide where to go – leading to both frustrating and funny moments. The local co-op for AereA isn’t quite my style, but I think this can be a fun game for players who want a simplified beat-em-up game to play together.

AereA is a mediocre experience that tries to blend a new idea with a rehashing of old ideas. The musical world of Aezir is fun on the surface, but the incredible amount of meaningless repetition and uninspiring story will pull players away. The enjoyable, albeit restricted, multiplayer is a nice addition, but not enough to keep players engaged.

One thought on “AereA Review”