Smoking Out the Competition

When the “next gen” consoles were revealed last year, I was immediately won over by Sony. Sure, Knack looked endearing in a Pixar-esque way. Killzone: Shadow Fall looked stunning, even to a self-proclaimed FPS hater. But none of these truly affected me.  It was the reveal of inFAMOUS: Second Son that locked in my preorder, and kept me locked in.

Fast forward a year later; the release date of Sucker Punch Production’s highly anticipated title was drawing near. In preparation, I played through inFAMOUS and inFAMOUS 2, rekindling my love with the series, Cole McGrath, and the signature third person gameplay. Though both of the games are now reaching their fifth and third birthday (respectively), they still feel fluid and distinct. And nearly as soon as I saved New Marais, I was facing the repercussions of my actions in Second Son.

Taking place seven years after the events of New Marais, Second Son introduces Delsin Rowe into the inFAMOUS formula. This Native American protagonist (or anti-hero, depending on play style) with a grungy rebellious streak stumbles into his conduit abilities and is instantly labeled by his community and family as a “bio-terrorist”. With the ability to drain other conduit’s abilities like a sponge, Delsin absorbs his new ashy abilities when a military transport vehicle crashes  after being taken over by the conduit prisoners. Without missing a beat, Augustine, the head of the Department of Unified Protection (tasked with taking down the bio-terrorist threat) shows up,  begins asking questions, and (using her own concrete abilities) tortures any of the tribe unwilling to sell out Delsin. In order to prevent the impending death of his friends and family, Delsin and his police brother Reggie truck over to Seattle to save their tribe.

Story is a fundamental aspect of every inFAMOUS title. Sucker Punch made this clear from the get go when they announced there would be no multiplayer in order to deliver a strong single-player experience. The story is largely determined by the moral choice system, where you can either become a hero to Seattle or and infamous villain based on your in game decisions.

When everything is said and done, the story is as powerful as it is short. The story featuring a varied cast of characters hit a series of highs and lows while delivering a witty script to match. Watching any interaction with Delsin and Reggie is guaranteed to bring a smile to your face, especially to those of you with siblings. The group surrounding Delsin all seemed different and troubled in their own ways, making them far deeper characters than Quo or Trish from games past.

Additionally, Seattle in a way is its own character. While I’ve never been to Washington state (or outside my time zone), the city felt more distinct than any open world city. While Empire City or Grand Theft Auto‘s various cities seemed generic, Seattle by its weather, population, and architecture always seemed spot on.

While able to deliver some of the snappiest writing and most emotional scenes PlayStation has ever seen, the story is undeniably short. The story, as is, can be completed in a mere 6 hours trucking from story mission to story mission, and yes that includes cut scenes. While the game never feels injured by the length, almost every aspect of the story would have been better if it was fleshed out. Delsin and everyone surround him seem to trust each other implicitly, without creating bonds and the character exposition is essentially over after their respective cutscenes. Second Son creates spectacular and deep characters, and then disappointingly does very little with them.

Further, after playing both the good and evil endings, the moral choice system once again seems arbitrary. It comes down to whether you want to be a decent human being or a complete piece of trash. Maybe this is what Sucker Punch is aiming for, but with both playthroughs and story lines being so eerily similar (save 3 missions), the player doesn’t feel the weight of healing every citizen he comes across or creating a fiery genocide. The system would be improved by presenting more ambiguous choices with harsher consequences (look at The Walking Dead by Telltale as an example). When the problem is “would you rather save a kitten from a tree or punch a nun in the face”, the game doesn’t bring the desired effect, especially if your brother is proud of you either way.

Ignoring these slight gripes, I want to note that the gameplay is absolutely fantastic. While the lack of a long and dense story normally will leave me bored in a game, the varied and polished combat made every D.U.P. encounter fresh and free roaming an absolute pleasure. Delsin begins the game with his smoke powers and new powers are introduced quickly to vary your play style. Do you like playing the sharpshooter? Try neon! How about rogue like takedowns? Or do you like power heavy behemoths? What’s even more impressive than having these different play styles is that each one is balanced and fun on their own right. Every time I thought I found my new favorite ability, I would have to overhaul my opinion when I switched.

The only control scheme that seems to have slipped between generation is the platforming. While scaling walls in inFAMOUS and inFAMOUS 2 was on par with the Assassin’s Creed series, Second Son often suffers from difficult climbing situations. Luckily, Sucker Punch understood this and made scaling buildings easier with every power–be it using air vents with smoke or being able to run up walls with neon.

The primary focus of the game is clearing the 10 D. U. P. controlled regions by catching secret agents, spray painting, destroying D.U.P. cameras, and destroying their bases. Realistically, there are only 6 different types of missions, however the gameplay and constant difficulty ramp manages to keep the game fresh. However, after you finish both the good and evil playthroughs and cleared all D.U.P. districts, there are few things keeping you coming back to the game. 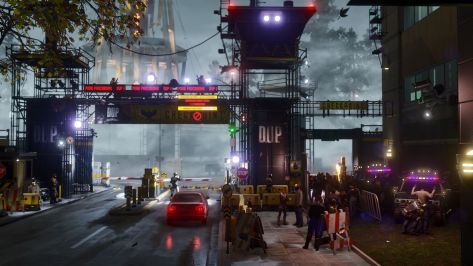 Last but not least is the gorgeous presentation. inFAMOUS: Second Son keeps the “grunge feel” so characteristic in the series, yet brings unparalleled graphics to the brand new PS4. Textures, sound, particles, lighting, and facial features are so amazing, that there are times I would stop just to look in awe. While I could drone on and on about graphics, eSRAM, this and that, you are better off checking the Digital Foundry article analyzing the features.

If you listen to the podcast, you know I am a huge ARG-geek and 42 Entertainment fan. After Sucker Punch managed to get Paper Trail up-and-running in the game, I got lost in the meta game. The free-to-play alternate reality game has you complete in game missions and online sleuthing and puzzle solving in tandem, leading to the most dynamic gameplay missions in Second Son. In fact, maybe the most ambitious gameplay yet in a game.

The game is being delivered in 6 weekly  installments and supposedly is adding 5 more hours to the game. If this is the case, many of my gripes will be at ease, and the game will deserve a higher score than I give it.

inFAMOUS: Second Son is undeniably a great game. With a powerful story and snappy writing, the only gripe is that we don’t get nearly enough! While replay-ability may be an issue in the future, the dynamic play styles, alternate moral choices, and Paper Trail will keep the game fresh for time to come. If you own a PlayStation 4, there is no doubt this is a game you need to pick up.

Lou Contaldi is MONG’s Nintendo Specialist and senior editor. He also spends his time habitating a law school. You can follow his incoherent ramblings at Twitter.

This review is based off of the PS4 copy bought individually. The reviewer spent 20 hours with the game, over a 5 day period playing good (normal) and bad (expert).