MONOKUMA IS BACK AND NOTHING IS SAFE!

The beach is super nice this time of year.  Nothing’s better than attending a school trip with 15 of your friends at an oddly abandoned beach resort and trying to connect with each other… YEA RIGHT!  Taking the stage is Danganronpa 2: Goodbye Despair for the PlayStation Vita,  the sequel to the 2010 video game, Danganronpa: Trigger Happy Havok. Developed by NIS America (Nippon Ichi Software), Danganronpa is back and not scared to pit you against 15 of your classmates!

Danganronpa 2 is a mystery game that features a suspenseful story, lots of mini-games, and chapter-ending courtroom chaos.  Danganronpa 2 puts players in control of Hajime Hinata, a boy who has just become one of Hope’s Peak Academy’s Ultimate’s (a student with a unique talent), alongside fifteen others. The students find themselves taken to a remote, tropical, resort island called Jabberwock.  The students are met by a rabbit named Usami and tasked to get to know one another and build interpersonal relationships.

Things are not what they always seem in Danganronpa and everything starts going downhill for the students as for Hope’s Peak Academy’s.  Principle Monokuma makes his appearance and immediately starts terrorizing the students. Monokuma informs the students they are stuck on the island for life unless they can kill each other and get away with the crime.  If the student can determine the murderer in a Class Trial, the culprit is executed, but if they make the wrong choice, then the killer walks home free while everyone else is sentenced to death. 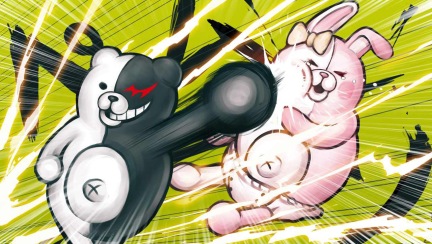 Over the course of the game, several students are murdered, a conspiracy takes place, and familiar faces make appearances if you played Danganronpa: Trigger Happy Havok, and a group of robot moonbeast will try to make your life miserable.  LET THE GAMES BEGIN!

The gameplay in Danganronpa 2 is broken down into three distinct modes: story mode, investigation mode, and the Class Trial mode.  While story mode is active, the player has the ability to run freely, talk to other students, enhance relationships, gain hope shards, and advance the story.  You are also given a digital pet you can raise by just simply walking around the island.  Additionally, there are hidden Monokuma images to find that can be exchanged for coins.  Coins are used to buy presents; hope shards can be exchanged for useful skills during the classroom trials. 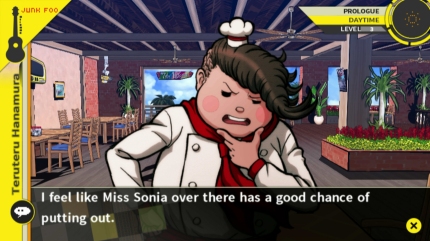 Investigation mode occurs when a crime scene is discovered.  In this mode the player is required to search and gather evidence by examining the crime scenes or talking with students.  This will help them in the Class Trial and help them successfully determine who committed the murder.

After the investigation, the the Class Trial begins.  This section of the game is made up of several mini games that use the evidence you gathered during investigation mode.  Some of the mini games have you agreeing or objecting in arguments.  Another has you fending off the suspect’s argument in a rhythm based game.  Successfully completing each game moves the trial along and brings you one step closer to discovering who the killer is.

I didn’t find any of these mini games difficult and some were very engaging at times.  I particularly found the Logical Dive one to be very fun.  Logical Dive has players steer down a logical tube whilst avoiding pitfalls, occasionally requiring choosing between multiple routes based on a question given, in order to arrive at a logical conclusion.  Hangman’s Gambit requires players to combine matching letters coming in from both sides of the screen before they collide into incorrect matches.  Panic Talk Action has the player press buttons in time to the music to shoot down arguments, albeit players must now spell out a phrase in the correct order at the end.  It’s a snowboarding type of puzzle and I enjoyed it very much.  If you want a challenge or are having a rough time with a mini game, there is an option before each case to move the difficulty up or down.

Danganronpa 2 looked great on the PlayStation Vita.  The art really wanted to jump off the screen sometimes and I never once experienced a slow down or screen tearing.  The students all were drawn very well and there expressions came to life on the screen; whether they were expressing happiness or they were just disgusted with you, it looked great every time.  As for the backgrounds, they looked amazing!  Danganronpa 2 really made me feel as if I was on a tropical resort even with dark mysterious plot taking place around me.

Danganronpa 2: Goodbye Despair is a very engaging, dark story with a great cast of characters.  Each trial in Danganronpa 2 will make you question who you can trust while moving forward.  Who will be committing the next murder?  Who are your allies?  Will you keep your friends close and your enemies closer?  You do not have to play the orignial Danganronpa  to enjoy Danganronpa 2 ( I didn’t play the first).  Just be aware that this is a sequel and some knowledge of the first title might help to understand what is going on.  Danganronpa 2 is another reason why the PlayStation Vita is a fantastic handheld.

I clocked around 30 hours to complete this title. Once you finish the game you are rewarded with another mode to play.  This mode lets you enjoy the island with the students instead of trying to kill each other.   This is a great game on the go for sure.

Patrick Garrity is an Associate Writer for Middle of Nowhere Gaming and a Jersey native, who loves video games and enjoys the industry.  He loves rum and wants to be a pirate one day.  Follow him on Twitter.