As a proper 80’s kid, I have had plenty of fun cranking up and down the 8-bit fields of Hyrule in the original The Legend of Zelda on the Nintendo Entertainment System.There’s something about Nintendo-made games that just ooze honed gameplay and polished mechanics. Flash forward to the 90’s: no longer a kid, I’m still having fun playing such Nintendo fare as Wind Waker on my GameCube, but I can also been seen playing a curious series called Dynasty Warriors on my PlayStation 2. I’m still having a hell of a time. Omega Force always made the Warriors games fun, if a bit repetitive. These games, like none other that I was exposed to, set you on a battlefield in an epic army-on-army fight during the fabled Romance of the Three Kingdoms era.

First things first: how does this game tell a story? The answer is “sort of poorly”. I don’t hold it against the developers, seeing that they tried to tell a Legend of Zelda story that drew from all of the narratives, but as any glance at they Hyrule Historia will reveal, the timeline of the Legend of Zelda is a bit… complex. Omega Force did a admirable job of attempting to cull a cohesive narrative out of the differing timelines to form a single thread to follow, but even their game splits along different lines as it tells a story. The overall narrative follows a woman named Cia who watches the Hero of Time (Link) across all ages as he rises up in times of need to battle the darkness. She falls in love with him, and has dark thoughts when she realizes that his heart always belongs to Princess Zelda. She nurtures this darkness to attack the Princess so she can have Link for herself. When the story is set in motion, she opens portals to all of the different time periods; mixing the settings, the monsters, the bosses, and the heroes from The Legend of Zelda: The Ocarina of Time, The Legend of Zelda: Twilight Princess, and The Legend of Zelda: Skyward Sword.

Dropping the historical setting and real characters of a Dynasty Warriors game leads to a drifting formless narrative that feels always off pace and out of place. I can forgive Cao Cao fighting in a battle that took place ten years after his death, but it’s harder to handle fictional faux pas. When you have the entirety of The Legend of Zelda lore to draw from, why did two of the games have be my least favorites? Skyward Sword and Twilight Princess were bottom of the barrel experiences for me, as far as The Legend of Zelda games go. Why not Wind Waker or The Legend of Zelda: A Link to the Past? Those were far superior games, in my opinion. But, what’s there from these two games is highly faithful to the lore of their original games. It all fits somehow, even if I couldn’t care less about these new characters introduced in Hyrule Warrior’s story.

How Omega Force get the story into my ears and eyes is another minor gripe I have. Everything is functional, graphics-wise, but it seems quite lackluster in a few key areas. In the introductory (HD!) video we are introduced to Link, Zelda, and Impa. During this very first video, I noticed some erratic frame rate stutter. It didn’t happen in any of the other videos throughout the game, so it had to be something about that particular video that made it nearly unwatchable. It was not a good introduction. 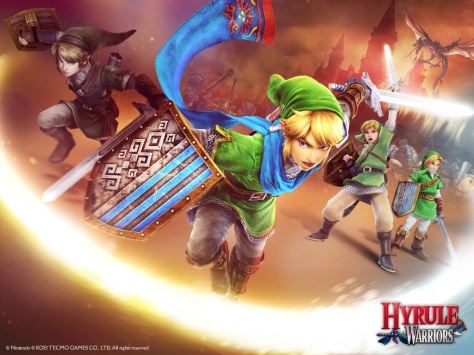 That gripe was quickly assuaged by the (at times) awesome music. All of the famous themes and musical cues from The Legend of Zelda are here. It totally convinces my brain that I’m playing a Zelda game. Unfortunately, this music is interspersed with the traditional driving hard-rock music that is in it’s own world in a normal Dynasty Warriors game. I was never a fan of it. It’s generic but overly-enthusiastic, somehow.

The normal ingame graphics really seem like they aren’t pushing the Wii U too hard. I know that the Wii U isn’t the most powerful console on the market, but it is nice how, when playing co-op, one person gets their own screen on the GamePad, and one person gets the TV as theirdisplay. I assume that that really pushes the hardware, as it’s rendering the game twice. It seems odd then, that when I go single screen, the game still looks the same. Maybe that’s not how the Wii U works, but I feel like it should optimize. However this stuff is a bit over my head, technically speaking.

Other than those quibbles, the game looks pretty fantastic. There are a ton of enemies on screen. The animation and character design is also more than adequate. I really enjoyed watching Link go to town on his enemies.

For me, the real meat of a videogame doesn’t lie in the story or the graphics. It is the gameplay that brings me back to the controller day after day. Luckily, there is some nice gameplay elements and mechanics to be had here in Hyrule Warriors. The basics of the gameplay come down to the normal Warriors’ hack and slash fare. If that doesn’t appeal to you in the slightest, then you should just move along to a different game.

At it’s core, Hyrule Warriors is about hitting enemies till they are KO’ed. When I knock out an enemy I get a bit of focus charge. When the focus meter if filled I can unleash a focus attack which clears the battlefield around me and can get me out of a tight spot. They are different for each character and would be kind of a spectacular event, if they didn’t occur several times in a level. 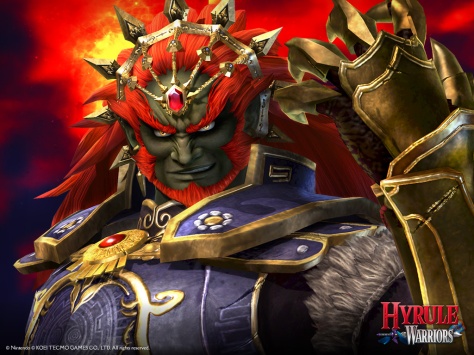 I unlocked nine characters on my initial playthrough, and I suspect there are four extra ones that you can unlock through the separate modes. Each character handles differently, with different running animations, attacks, special attacks, and even different weapons which can turn your movesets into something else entirely. Hacking through enemies with the Master Sword is substantially different than using a Fire Rod. Other characters have different weapons to draw from, giving quite a range of gameplay styles and combos depending on who you choose for a mission and which weapon you equip them with. The game’s inherent repetition is alleviated with this variety. 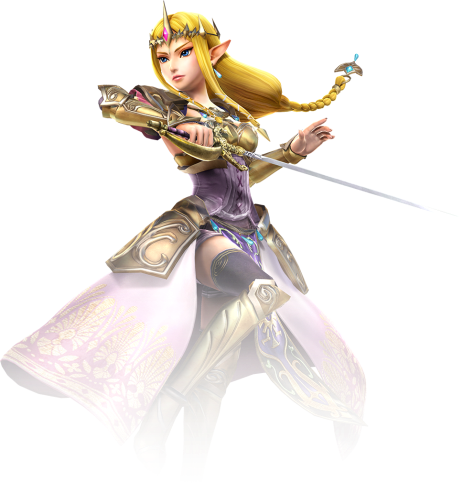 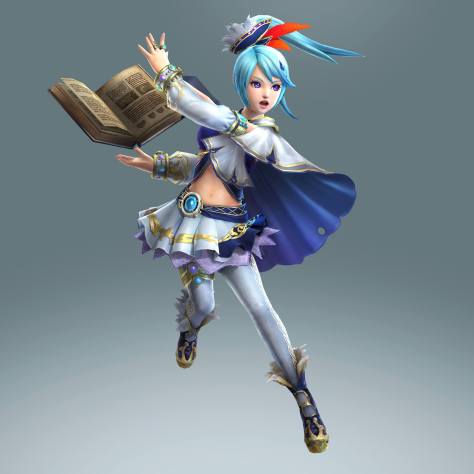 On normal difficulty, the game presents very little challenge for someone like me who is steeped in the Warriors’ gameplay. If you are unfamiliar with some of the gameplay concepts, it can be difficult to figure out what is going on in the battlefield, seeing that the characters are basically texting you instructions and status updates. You have to be able to read what’s going on without getting turned around on the levels, losing sight of your opponent, or running into the corners or off of cliffs. I lost a few rounds because I didn’t understand the instructions in time, or I couldn’t figure out the proper strategy. This led to many restarts and not a little frustration on my part.

This game deserves high praise for an in-mission save system. It is almost as convenient as a PC game’s save system. When you hero falls in battle, you can choose to restart the level, return to the last checkpoint you cleared, or revert to your last in-mission save. I can’t praise the saving enough. This is the best new feature in a Warriors game. This comes in super handy at the last hard fight of a thirty minute plus mission.

The special weapon attacks are in place as a nod to the Zelda games of the past. You’ll come across familiar tools like bombs and boomerangs, which can be helpful in boss fights or for map traversal. I found that they were ridiculously underpowered when used against the normal enemies. It doesn’t make any sense for a bomb to bring down King Dodongo but basically only scratch a skeleton or mini boss. The same with the bow. It is totally useless unless it you are fighting the one enemy that it can one-shot, or a boss with a glowing weak point.

Occasionally, special weapon powerups can be found that makes these tools lethal, but they are more than likely the one I don’t have equipped at the moment, and I end up wasting too much time trying to click over to the right tool in the menu while the timer clicks down. It’s simply much more efficient to use the primary weapon, unless the powerup is for the currently equipped special weapon. The light bow is my favorite whenever I do end up with that power up. It almost makes up for the bows otherwise meager effectiveness.

There is a ton of fun to be had in this game. Going through the other modes with the other characters is something I will enjoy for weeks to come. Technically, there is a crafting system here, but I only used it on Link’s character. Crafting can unlock extra combo attacks, giving it enough value to chase it down and master, I believe, but you could easily ignore it altogether and not miss anything. Also of note is an Adventure Mode, which is just a cleverly disguised series of challenges. There are tons of challenges to attack if you seek the rewards contained within.

This game works surprisingly well, considering that it is a product of an unholy marriage of a Warriors game and a Zelda game. It feels like a fan-mod of a Warriors game. There is a ton of nice fan service which pays respects to The Legend of Zelda series, but little of that actually make the game more fun to play. I like the idea of seeing the tools of Link and company unleashed on a field of battle, but the overall execution is a bit lacking. The game looks good, but I wouldn’t have mind a sacrifice of less on screen noise, and more graphical fidelity. But it is a loud, dumb, fun Warriors game and The Legend of Zelda facade on top seems to improve the basic Warriors formula. I unreservedly recommend this game to any Zelda fan with an open mind, and this would be a must buy for any Warriors fan who hasn’t been burned out by the semi-annual releases.

Dustin LaRoe is an Associate Editor for MONG and is pretty awful at games. His Gamertag and Steam ID are Guy 105.