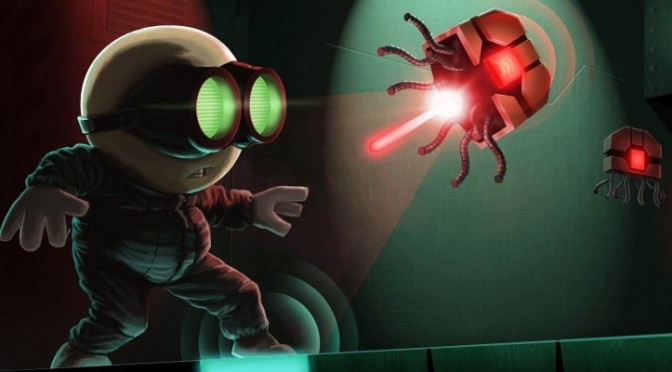 NOT YOUR AVERAGE CLONE

Indie developer Curve Digital has made a name for itself in the gaming community. They have put together quite an impressive portfolio of games that includes Velocity Ultra, Thomas Was Alone, and The Swapper. After the critical triumph of their stealth puzzle platformer, Stealth Inc.: A Clone In the Dark, Curve Digital is looking to clone its quality in the first sequel the studio has made (see what I did there?). With all the success that Curve has, it would be blasphemous for Stealth Inc. 2: A Game of Clones not to follow suit. 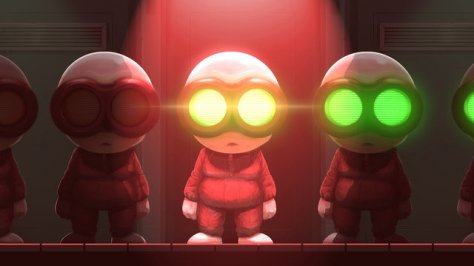 Stealth Inc. 2 sheds a bit more light on the story of the game than its predecessor did. Minutes upon starting the game you learn that you are a clone used for the testing of security products at PTi industries. It’s after hours at the test lab but one man is still there. Why? He wants to kill you. A scientist is one successful test away from being at the top of the company leaderboard, but unfortunately for him you are surviving everything he throws at you and freeing other clones along the way. The story is not at all close to some of the powerful stories Curve has published in previous games, but it provides a reasoning for the gameplay and it is well executed through the game’s witty dialogue and drawn cutscenes.

When I sat down to review this game, I booted up my Wii U, and was immediately blown away by the opening of this game. It was presented in such a way that it is one of the best opening sequences of any game in recent memory. The music was intense. The level was perfectly designed. Those who played the first game will especially appreciate it. Stealth Inc. 2’s opening is a paradigm of the game’s exceptional presentation. 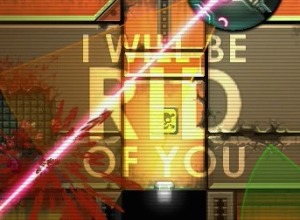 The well-written dialogue of Stealth Inc.: A Clone In The Dark returns in its sequel. The dialogue comes from the game’s antagonist as he speaks to you by projecting his remarks on the walls while you are running through his tests. This commentary can range from statements of pure animosity to humorous teasing and even the occasional compliment. This all occurs as you run through eerie, high-tech deathtraps accompanied by intense music.

While running through the dark, sophisticated, corridors of PTi Industries you’ll notice new gameplay changes to Stealth Inc.’s successor. This includes new gadgets like the complex “adventure light,” the painful to use “jack boy,” my personal favorite, the “inflate-a-mate,” and more. The inflate-a-mate is a dynamic throwable tool that springs from the ground upon activation. It can act as cover from enemies, a springboard to get you to elevated ledges, and can just be used as a weight that crushes enemies, and holds down pressure plates. The jack boy gadget allows you to take control of unsuspecting enemies. This gadget is very useful when it works. Unfortunately to activate this tool you must have perfect timing. Think of the “active reload” feature from the Gears of War series but much faster and much more unpredictable. The penalty for missing the mark is more often than not death which can be very frustrating after your third or fourth attempt at trying to take control of an enemy. The adventure light is the third gadget you obtain in the game. This gadget is a simple light that can activate traps, doors, and elevators. Each tool may sound relatively simple but each contributes to some of the best level designs in all of platforming games. 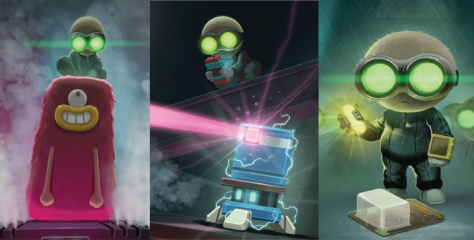 Also new to the series is a Metroid-vania style hub-world. This hub provides a nice change of pace from the tests the scientist puts you through. While freely traversing PTi industries you will find plenty of puzzles and collectibles for you. However, throughout the game I found that I was often stuck on puzzles on my way to my next missions. For example, at one portion of the game while attempting to get to the next mission there is seemingly one way to advance. However if you attempt to go down this path you will be killed by an enemy upon sight. After trying to get past him for over an hour, I finally found the solution. To advance, the player must walk into a nearby room and jump through a certain half of a teleporter.  The level design in the missions can incredibly complex and challenging, yet they never feel impossible to beat. Unfortunately, this isn’t the case for some of the challenges found while roaming PTi.

The core of Stealth Inc. is retained in Stealth Inc. 2. The jumping is fast, yet a tad floaty. The pacing is dynamic in that players can move quickly through levels or take their time. Also, once again, the level design is impeccable.

Another returning feature is the ability to create your own levels. This portion of the game has been enhanced significantly. The user interface is now easier to use, there are many more items at your disposal, and you can now play custom levels online.

As far as Wii U Gamepad integration goes, Stealth Inc. 2: A Game of Clones does nothing out of the ordinary. While in game, it displays a map of PTi industries along with percentages for clones saved, “S” ranks, and tests unlocked. You can also view your equipment, pause your game, and customize your clone with the Gamepad. Furthermore, by pressing the select button, you can display the game on the gamepad.

Despite some frustrating puzzles in the free-roaming portion of the game, Stealth Inc. 2: A Game of Clones is yet another excellent platformer by Curve Digital. The presentation is astonishing and exceptional; especially for an indie game. The innovations of game-changing gadgets keep gameplay fresh, and, lastly, the core mechanics of the game as well as the level design is well polished. To sum it up, Stealth Inc. 2 is more than just a clone of the original.

Matt Batson is one of MONG’s newest writers. He enjoys games, heavy metal, and comic books. You can follow him on Twitter and IGN.