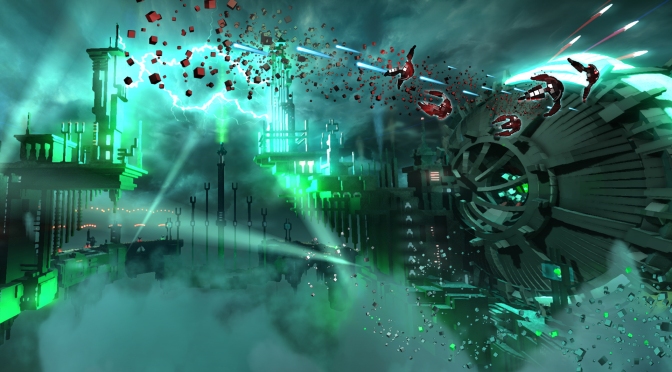 On the eve of the PlayStation Experience event in Las Vegas, independent developer Housemarque dropped a few announcements regarding their acclaimed lineup of games.

To start the day, the Finnish studio tweeted the news that PlayStation 4 hit RESOGUN will be making the jump to PlayStation 3 and Vita on December 17th in Europe and December 23rd in North America. Housemarque confirmed the Vita port in October.

RESOGUN coming to PSVita & PS3 on Dec 23rd thanks to our friends at @climaxstudios. Cross-buy AND cross-save! http://t.co/YC3xXh82Uo

RESOGUN, set at $14.99, will be cross-save and cross-buy, meaning if you own it already on PS4 (perhaps with PlayStation Plus earlier this year), you’ll be able to download it for free once it’s released.

Super Stardust Ultra is coming to PS4 with a bunch of new stuff thanks to the talented @d3tLtd team! http://t.co/0u5VIpBU5o

Not quite finished for the day, Housemarque returned to RESOGUN news by revealing new DLC for the PS4. The new pack, titled Defenders, will “feature two all-new game modes – Protector and Commando, new ships, and all new planets featuring some of our most detailed artwork to date,” according to the PlayStation Blog.

A bit of free content in the form of a major patch will soon be available, as well, adding extra challenges in the current game modes.

Take a look at the video for Defenders here:

These are all fantastic announcements, obviously. Housemarque has been on a streak of developing great games, with RESOGUN topping that list. A second DLC pack shows that the company is interested in the longevity of its games and is receptive of the continued praise RESOGUN is getting. Super Stardust Delta was my first Vita game and I hope Ultra will continue the standard Housemarque has set on PS4.

Brian Hoerst is a dude living in New York City who types using a total of six fingers. He didn’t pay attention to his typing class in middle school. Follow him on Twitter.