There Came an Echo is the second game by independent game developer Iridium Studios. A squad-based, voice-controlled real-time strategy game that’s heavy on the story, the title follows Corrin (voiced by Wil Wheaton) and a cast of characters that includes some from Iridium’s Sequence. After meeting the ambitious $90,000 goal on Kickstarter.com, There Came an Echo has finally found its release on Steam (PC), but where has that money gone?

From the very start, the plot hardly lets you assume where it found inspiration (often making light of it), recreating much of The Matrix‘s office scene where Keanu Reeves must be guided out of agent grasps. Corrin, designer of the master computer encryption code called Radial Lock, finds himself pursued by a group who would have him break it and unleash “something” very dangerous. It’s up to Val, a mysterious observer, and the player, known as Sam, to lead Corrin and his growing team of rebels against the world’s threats.

Iridium takes its time to introduce Val and Corrin’s plight and to develop their characters. Val is awkward, yet driven towards uncertain goals. Corrin is a mostly oblivious bystander with strong ethical guidelines. However, as each new character joins the crew, the level of character development vastly diminishes. Many characters end up feeling stock, familiar from too many popular dramas. Miranda is the ruthless female mercenary who doesn’t take sh*t from anybody. Syll is a certified genius who wants revenge for his dead wife. Grace is a volatile teenager who wants revenge for her dead sister. The characters hardly vary much from that, and if they do, they’re not memorable for it. By the time the main plot twist rears its head, many gamers will be left wondering why they should care about what happens to 90 percent of the game’s characters. 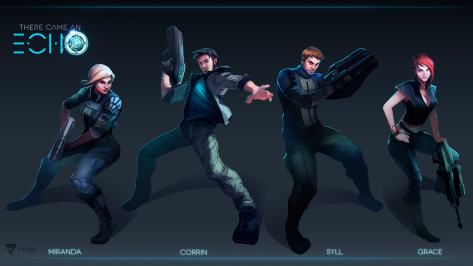 It would be fair to say that the game’s voice-acting would be amongst its selling points if it weren’t for Wil Wheaton. With names like Laura Bailey (inFAMOUS: Second Son, Persona 4 Golden) and Ashley Burch (Life is Strange), There Came an Echo includes several skilled voices from gaming’s growing pool of talent. Wil Wheaton just can’t be added to them. Corrin often sounds stiff, like he’s simply reading lines (“Hmph” probably shouldn’t sound like “Hmffff”), and awkward in delivering them. Val is often awkward in a cute, funny way because her lines afford that flexibility (Ashley Burch made Val my favorite character). Corrin is awkward when he asks Grace “how did your sister die?” conversationally. After the five hour campaign, it proved difficult to ignore and constantly distracting.

The game claims to have a strong narrative focus, and it does, but it ends up being at the cost of its gameplay. Many levels consist of short firefights, followed by long cutscenes to forward a plot that gets more convoluted by the second. The main conflict shifts so many times, it admittedly never gets confusing, but it tends to lack focus. Each level is the same way. Instead of allowing players to master the combat and feel that sense of supremacy over a difficult trial, the mechanics often shift to something completely new and simple. There were few situations where I was allowed to develop my strategies or had actually felt like I accomplished something of note.

The equipment customization feels equally simple. There is virtually no progression system besides the weapons and items Val hands over to you before certain missions. You have some opportunity to choose from different equipment, to make the team your own, but she eventually just gives you everything, and that lack of accomplishment creeps up again.

Visually, There Came an Echo is fine. It’s colorful and at times interesting to look at, but the soundtrack has the bigger budget here. Composed by Big Giant Circles (Jimmy Hinson), the game’s theme is tantalizing. Paired with the beginning cinematic, it’s easily one of the most immersive elements of the entire experience.

But, quite possibly the most important aspect of There Came an Echo is the heavily boasted voice-control functionality. The entire game consists of issuing commands to your units as if you were in their ears. You can order Corrin to move to one of the many nodes scattered across each map, while telling one or all of the other three units to suppress a target. It’s a little frustrating when you’re in the middle of a battle and Val explains that the units can’t hear you or that you’re being too loud, but when it does work, it’s empowering. Luckily, if you’re one who doesn’t own a good microphone or just don’t want to talk to your computer, then there are other ways to control a squad (though the game loses a lot of its flavor if you avoid the voice-control).

Besides common commands like moving to a certain point or attacking a particular target, Iridium cleverly allows players to customize those commands however they want. If you want to talk to your squad with lines from the movie Aliens (or anything else you can imagine), then feel free to set the “retreat” command to “Game over, man!” This allowance for creativity is where the game is at its finest. Sometimes it feels like the entire thing is simply a vehicle to deliver this mechanic alone.

There Came an Echo stakes its claim on innovative voice-control, even though elements of its voice cast don’t hold their own. With a mostly uninteresting, unoriginal plot and characters who feel pulled out of the latest Hollywood Summer flick, its focus on narrative feels wasted in lieu of lacking strategy and complexity in its gameplay. Music and art-style make up some ground for this Kickstarter project, but can’t do it all for Iridium Studios’ latest.

Jordan Loeffler is an Associate Editor for MONG who drives a 2006 Pontiac Vibe with Minnesota license plates even though he lives in Portland, OR. She’s seafoam green, and she drives like a wave. You can also follow him on IGN and on Twitter.

One thought on “There Came an Echo Review”