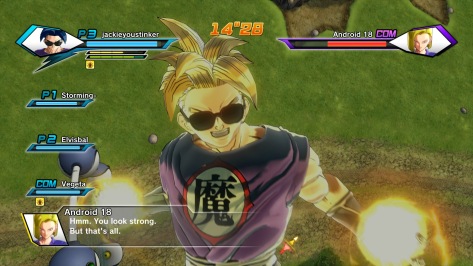 Dragon Ball Xenoverse is the first Dragon Ball series to hit this generation of consoles, and let me tell you, the cel-shaded planet Namek has never looked better. The visuals are beautiful and crisp while the sound effects sound empowering and familiar. A kamehameha sounds just like you remember it while a final flash is a spectacle for the eyes and ears. It is also worth noting that the entire Dragon Ball Z Kai voice cast is present for this game, and Japanese audio is available for subbed-only purists. It isn’t by any means well-written or compelling dialogue being delivered, but rather a classic mix of comical and serious cheese that Dragon Ballers are used to. That being said, the cast does an excellent job outside of a some of the new characters.

Dragon Ball Xenoverse puts you right into the action. Literally, after the game’s opening sequence, you can place yourself in the Dragon Ball universe through the game’s character creator. You are offered five races to choose from i.e., Earthlings, Majins, Sayains, Namekians, and Frieza’s race. Each bring different stats to the table as well as exclusive gear available to them down the road. As a fan of the TV series, this was incredible to see my creations fighting alongside the likes of Goku, Vegeta, and Gohan. This feature also added more intrigue to the game’s unique story. 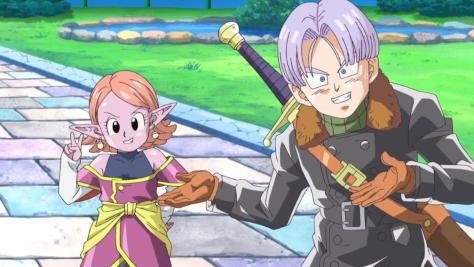 Dragon Ball games have always had the habit of opting to retell the original DBZ story. As exciting of a story that is, it has been retold a multitude of times since the series ended. Dragon Ball Xenoverse is straying from this established story in order to tell it in an original way. Xenoverse places your created character in the role of one of a time patroller. The time patrollers are a special group of warriors that is led by the Supreme Kai of Time and Future Trunks. Their task is to fix any anomalies that occur in the Dragon Ball timeline. This new approach still allows the player to participate in epic moments from Dragon Ball history, but it does so from a different perspective while adding new storylines as well. Players who simply play games to get through the story may want to avoid Dragon Ball Xenoverse as it will punish those who do not play other game modes. The game is very similar to the series in that you will encounter a powerful enemy, get your ass handed to you, train to get stronger, and finally defeat him with your new skills. You aren’t going to be training in the hyperbolic time chamber or under enhanced gravity, but rather through leveling up, and attaining new gear and skills in the games other various game modes.

Xenoverse is a very large game with high replayability considering its content. As a result of the story’s difficulty, the player must explore this content in order to keep up with the high powered enemies in the game. Dragon Ball Xenoverse offers steady offline and online battle modes that can range from 1v1 to 3v3. It also offers a rewarding mentor system, and fifty different side quests. Each of these will not only level up your character and give you attribute points, but these game modes also supply you with some of the rarer skills and pieces of gear.

Battle mode is exactly as it sounds. Your goal is to K.O. your opponent(s) before they take you down. You are given 47 characters to choose from and they each have different variations to choose from as well. This means that despite having drastically different skills and stats, Saiyan Saga Vegeta and Buu Saga Vegeta count as one character. The drastic changes aren’t just prevalent in the character variations but also from character to character. Characters feel different from each other in Xenoverse despite some consistent combo systems; however this does not make the game unbalanced. With a skilled player behind the controller, even Yamcha can overcome a super saiyan. 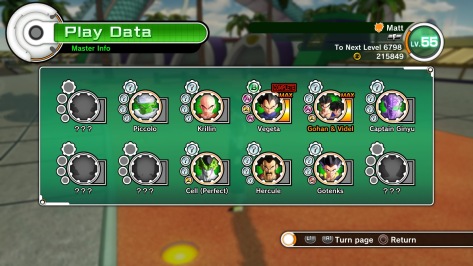 One of the most rewarding portions of the game is the mentor system. While walking around Xenoverse’s hub world of Toki Toki you can run into some familiar faces from the beloved series. While some may be there to ask you to go on a side quest, some are actually there to mentor you if you want them. Towards the beginning of my journey I had the benefit of having Vegeta as my mentor. As we sparred and went on special missions together, our relationship increased in a style that draws parallels to the social link system in the Persona series. As the relationship increases, your mentor will teach you a variety of their different signature skills. With Vegeta as my mentor, this meant that I would learn moves like Galick Gun and Finish Breaker all the way up to his ultimate attack, Final Flash. When the relationship is maxed out you are able to replay missions with your mentor as well as spar with them, and you are given a Z-assist. The Z-assist is a special event where you perform an ultimate attack taught by your mentor, and the mentor will show up to help in a way that harkens back to the DBZ series when Goku helped Gohan defeat Cell with a Kamehameha. 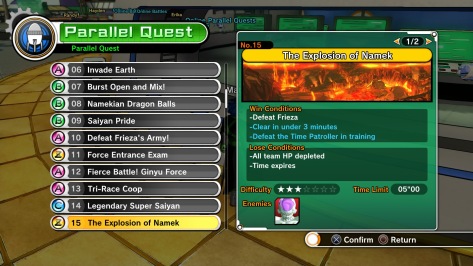 The most prodigious of the side content comes by way of the Parallel Quests. Parallel Quests are side quests that have you take on a variety of scenarios. Whether it is collecting dragonballs on namek while fighting off Frieza’s men or fighting the girly alien himself in under 5 minutes, you can do it on your own, with A.I. teammates, or with your friends online. Parallel Quests also are the catalyst of the games addictive loot system. Every PQ offers a large variety of loot. The catch is that you don’t get all of it for completing the mission. This caused me to replay missions over and over again in order to to come away with my desired gear or skill.

The fighting mechanics of the game are in the upper-echelon of Dragon Ball fighters. It lacks the mechanics and combo variety that you may see out of other fighting games but Xenoverse is still exceptional in that regard. The biggest part of strategy in Dragon Ball Xenoverse is managing your ki, and stamina meters.These meters are affected by the types of moves you make. For example, comboing with basic attacks will increase you ki while special attacks will do the opposite. If you are using your dash too much you’ll be out of stamina. Worst off all, when you are coming off of a Super Saiyan transformation, your ki and stamina will hit zero.  Managing both stats is the key to winning because without ki you cannot perform special or ultimate attacks, and without stamina you cannot block, dash, or teleport out of the way.

Though the mechanics are solid, the supporting A.I. is not. In fact, to say that it is useless would be a severe understatement. When playing against a computer with another on your side, you will find that your teammate(s) will stand still and infrequently attack at random. This may be empowering for some to take on a whole mission by themselves, but when in a pinch the A.I. will never come to your rescue. Even worse, I was once set up in a 3v3 online match where my teammates bailed and the match began with two A.I. teammates by my side. The opposing team quickly dispatched them within the first two minutes of the game setting up an unfair 3v1 in the opposing teams favor.

Though it was not often a problem of mine, the server issues that the game has been having are worth noting. Despite being a game you can play entirely offline, Dragon Ball Xenoverse requires you to connect to their servers every time you start up the game. Many times the game would not connect, but I was still allowed to play. The whole game was still available to me except for the ability to send gifts to a friend, and have real players walk around the hub world with me. Other times when the game could not connect, I couldn’t play the game at all. It makes absolutely no sense to take out some obscure online features and it makes even less sense to lock me out of the game even if I won’t play online.

Dragon Ball Xenoverse could have been over 9000, but unfortunately this great game is hit by terrible supporting A.I. and sporadic server issues. However, these issues don’t take away the fact that this game is the best Dragon Ball experience to ever hit consoles. The solid fighting mechanics are accompanied by a fun story, substantial side content, tons of loot, and a spirit bomb full of fan service. Because of this, I am absolutely looking forward to Xenoverse becoming an established Dragon Ball game series.

Matt Batson is one of the many Matts here at MONG. He is also a Co-Host of MONG’s More Than The Score Podcast. He enjoys games, heavy metal, and comic books. You can follow him on Twitter and IGN.