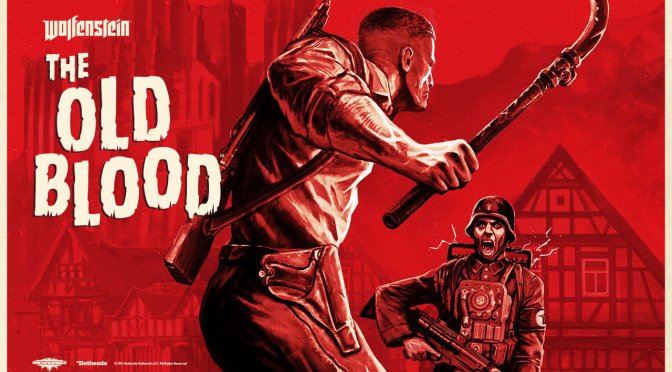 Early this morning Bethesda revealed Wolfenstein: The Old Blood, a standalone prequel to 2014’s Wolfenstein: The New Order. Developer Machine Games is at the helm again and it will once again star B.J Blazkowicz.

The Old Blood will take us back to 1946, where the Nazis are on the brink of winning World War II and it will be a two-part mission deep within Bavaria.

Part one, titled Rudi Jäger and the Den of Wolves, see Blazkowicz busting back into Castle Wolfenstein and going head-to-head with a insane prison warden.  Part two, The Dark Secrets of Helga Von Schabbs, has Blazkowicz leading a mission to the city of Wulfburg, where you search for an obsessed archaeologist who is looking for a mysterious dark artifact.

“Diving back into the world of Wolfenstein has really been fun for us,” said producer Jerk Gustafsson. “We’ve enjoyed exploring the events leading up to The New Order. We think fans will really enjoy the story, all the action and, of course, jumping back into the combat with new weapons.”

Wolfenstein: The Old Blood will be available digitally on May 5, 2015 on PC, PS4, and Xbox One for USD$20.  The game will also be showcased as PAX East on March 6th through March 8th.

Applauding.  Waking up this this news was fantastic!  I have been a Wolfenstein fan since I was a kid (it was actually one of the first games I ever played), so yes, I am super excited about this news!  Wolfenstein: The New Order was a great game and looked beautiful.  If you are going to PAX East I highly recommend getting over to Bethesda booth and checking this out.