The time has come!  Our official Game of the Month for April 2015 is…

OK, maybe picking a game which originally came out June 2014 is cheating; yes we did already give it Indie Game of the Year and Platformer for 2014, but we here at Middle Of Nowhere Gaming will take any opportunity we can to praise the amazing, retro-inspired platformer that is Shovel Knight. So, when it came to PlayStation platforms and the Xbox One last month, we couldn’t miss the opportunity to give it our Game of the Month.

While, I may not have had the opportunity to review Shovel Knight, back in 2014, I can easily say that I completely agree with Lou’s review. Shovel Knight isn’t just inspired by classic NES games, e.g. Mega Man, DuckTales and Castlevania, it improves on them. 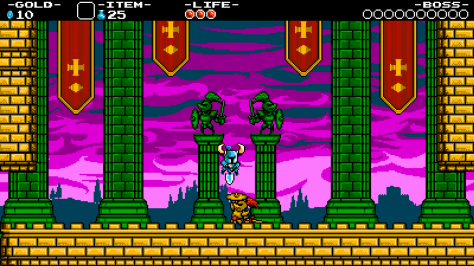 Shovel Knight is worth checking out for more reasons that I can name: pristine level design, the constant awful puns, the beautiful sprite models, the randomly occurring events in the overworld. I could go on for hours.

Yacht Club Games has proven that they are more fluent in both classic and current game mechanics than most other developers. Shovel Knight not only acts as a love letter to classic gaming, but also the perfection of it. Whether you enjoy indie titles or not, the $15 price tag is well worth the 10-15+ hour experience. This game carries my highest recommendation: go get it!

Congratulations Yacht Club Games for winning Middle of Nowhere Gaming’s Game of the Month for April 2015! We can’t wait to play the upcoming Shovel Knight: Plague of Shadows DLC.