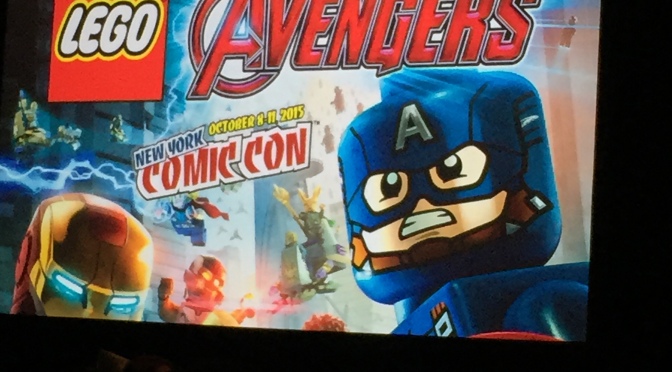 Peanut butter and jelly. Nachos and cheese. Bert and Ernie. Pairs that, though the single items may be great, become infinitely more amazing once they are combined. Now imagine this: the LEGO franchise and all things Marvel. The incredible combination is LEGO Marvel’s Avengers. I’m here to tell you that, yes, it is as amazing as it sounds!

I recently had the opportunity to play the demo at New York Comic Con after the Panel and press interview with the wonderful people of Marvel and TT Games. There, the press was able to hear some fantastically new information as well as the inner workings of creating such an in-depth and vast world.

Immediately into the demo, you’re able to play as Captain America, Thor, Hawkeye, and Black Widow. Right away, there are options on gameplay. If you want to play long-distance, Hawkeye is your guy; in the mood to blast thunder, then Thor is your guy; feeling close hand-to-hand, you have your choice of Captain America and Black Widow. Even more so, all four of the characters have unique abilities and traits that directly correlate with their specific powers and skills. One of my favorite things that I accidently discovered was that you can direct Captain America’s shield to hit multiple locations once you start locking it in. Needless to say, there is plenty to explore with character selection.

Like any LEGO game, there are certain objectives that you must complete in order to progress in the level. Unsurprisingly, this became very polarizing. Some points were fantastically entertaining, while other times you’re scratching your head in a bad way. You’re forced to keep hitting cars or enemies until you stumble upon what you need to accomplish. Luckily, these are few and far between, so the gameplay isn’t stifled.

The graphics in the game are also fantastic! Very crisp, very smooth, and a lot of vibrant colors. This, coupled with strong musical overlays, gives players a great gaming experience. 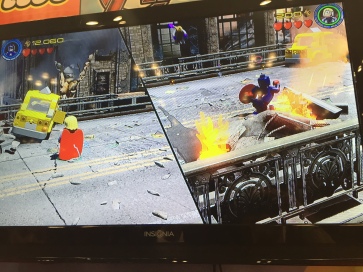 The major gripe I have with this demo is included in the co-op mode. With ease, a second player can join, which offers fantastic co-op couch opportunities. The issue I have occurs with the split-screen. As the two players maneuver through the level, the split screen actively moves. For example, the split-screen will have the two halves horizontally, then shifts diagonal, then vertical. This gets VERY confusing. The person I was playing with was getting confused numerous times and said “wait, I’m on the left? no, the right? wait what?”. This certainly is not a deal breaker. I’m sure players can eventually get used to the shifting, but it seems like an unnecessary tweak to the game.

The demo at New York Comic Con was just the tip of the LEGO iceberg. With over 200 playable characters, 8 varied locations, and scores of other secrets, there is no doubt that this will be a massive game to kick off 2016. I’m incredibly excited to check this game out in January!

LEGO Marvel’s Avengers will be released on January 26, 2016 for Nintendo 3DS, Wii U, Xbox One, Xbox 360, PlayStation 4, PlayStation 3, PlayStation Vita, and Windows PC.