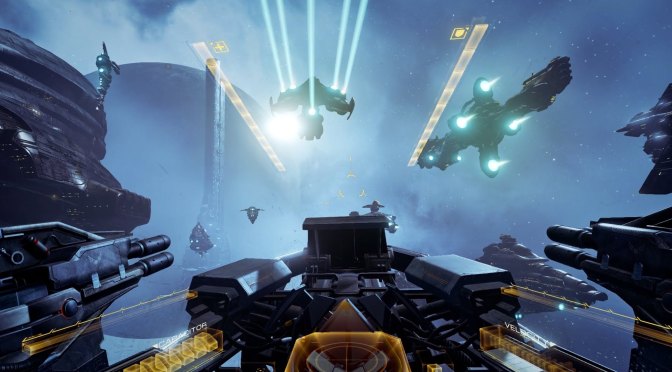 Play it with Rift, Vive, and PSVR gamers regardless of your chosen platform.

Polygon reports that at Reykjavik, Iceland’s Fanfest, Eve: Valkyrie executive producer, Owen O’Brien announced that players would be able to enjoy the exciting new virtual reality experience together while running it on separate platforms.

“Valkyrie from the outset was made as a VR game, and we want people irrespective of the platform they’re playing on to be able to flight together and die together. So that’s a big important thing for us. That everyone can play together and we break down the barriers.”

A launch title on the Oculus Rift, Eve: Valkyrie has also been announced for HTC Vive and PlayStation VR.

This announcement is one more in a wave of news regarding cross-platform play. Although there may be ulterior motives for CCP Games to develop cross-play (the VR adoption rate will be understandably slim at launch due to low availability and high cost – merging platforms will help populate servers for a VR launch title), it is no less a valiant effort towards bringing gamers together… to virtually murder each other.

Jordan Loeffler is Editor in Chief for MONG who will be one less early adopter in the VR movement, but he is no less interested in seeing it succeed, perhaps in hopes that its price dips just a little bit. You can also follow him on IGN and on Twitter.